Distraught, Tess was walking the streets of Gungahlin, tears in her eyes as she picked up bits and pieces of the things thieves had stolen from her car overnight.

The single mum was struggling with the stress of returning from Sydney, where one of her children had just had surgery.  She'd had major surgery recently, too, and the break-in – when thieves stole baby clothes, medical papers and new toys for the kids – was the final straw.

But what happened next is near the top of the list of the "rugby league nice-guy" files. 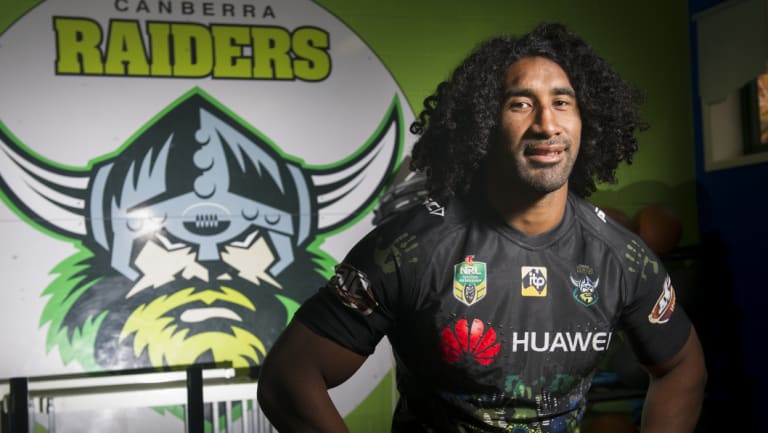 Sia Soliola enhanced his reputation as one of the NRL’s nicest players.Credit:Elesa Kurtz

She'd been stopping strangers in the street, asking if they had seen any of the books, toys, clothes or medical paperwork the thieves had carelessly thrown away when they realised it was of no value to them.

Then she ran into Sia Soliola, even if she didn't recognise him at first. He was just a man in a yard, going about his day. Tess has been a Raiders fan for 30 years and Soliola is arguably the most recognisable player with his shaggy hair. But she was so upset she didn't realise who he was until he put out his hand and introduced himself.

"He was incredibly nice, compassionate [and] asked if he could help in any way," Tess wrote in a letter to the Raiders, which is reproduced in full below.

"I said no thank you, other than keeping an eye out [and] that the supermarket had my number if anyone found anything. I then finally recognised him as he held his hand out and introduced himself, 'Well my name's Sia [and] if you ever need anything this is where I am and feel free to come up and ask'."

Talked turned to footy and the Raiders, who returned to pre-season training this week. Then Soliola saw the tears in Tess's eyes.

"He asked about my kids [and] if we were OK. He then offered to drive me around the suburb for 5-10 mins to look as I couldn't walk far," she said.

"I politely declined not wanting to put him out but he insisted. I managed to find a few bits of paperwork but nothing else. He dropped me back to my unit [and] also gave me some money to 'buy the kids something'. To say I was blown away is an understatement. 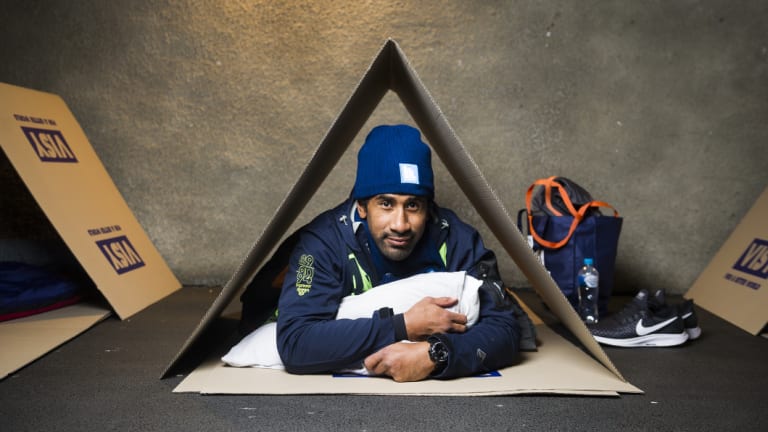 Soliola slept on the streets for the CEO sleepout this year to raise money for the homeless.Credit:Dion Georgopoulos

"He was so kind, calm and just an amazing person. And incredibly generous. He has absolutely restored my faith in people [and] humanity and as a single parent, having my car broken into after my surgery and my child's surgery was the last straw for me."

Soliola has a reputation as one of rugby league's nicest players. He wakes up early and spends his mornings serving food to the homeless, he's an ambassador for Menslink and raises awareness for Angelman Syndrome.

"If we can help them out as much as we can in our own backyard, it's not only a good thing for yourself as an individual, but for us as a whole as a community," Soliola said earlier this year when talking about his work away from the NRL.

Raiders coach Ricky Stuart added: "It's a part of him as a person. He's a very caring, giving guy. At times Sia's got to think more about Sia because he's such a caring person and that's the personality he is."

"Since day one he's been at the club he's been a breath of fresh air for us. He's a great leader, he certainly leads by his actions off the field in regards to what he does with his charitable efforts.

"He's always caring and giving for others and he does it because he enjoys it and wants to. It's not something Sia sees as a responsibility, it's Sia's personality and character.

"I've been involved with Sia since he was 18 and he's like family. I really care about Sia. When you've got a guy like that that cares so much about others you've got to have people around him that care about him."

FULL LETTER FROM TESS TO THE RAIDERS

My name is Tess. I'm not sure how to get this to who it needs to go to, but I'm hoping you can help and pass this onto the appropriate person.

I've been a Raiders member for quite a few years now & a Raiders fan since I was 5. I'm 35 now. About a month ago or a bit over that now, I had an amazing experience with Sia Soliola & I wanted to write to thank him, but also let the club know.

As a Raiders tragic, I know Sia is a leader of the club and an amazing player. But my experience with him, he also restored my faith in humanity and as a mum, he helped me & my kids out, totally off his own back and in his own personal time.

About a month ago My car was broken into overnight and some bags taken from it. I'd just returned from Sydney with my child having surgery there & I'd had major surgery myself in August. The bags stolen were just shopping bags and contained our worn clothes plus some new clothes, books and soft toys I'd only bought the day before. I was walking the streets of my suburb as up one street I'd found a bag had been tossed out and a few books & items of clothing on the road. All ruined as they'd been driven over & obviously thrown from the car of the person/people who'd broken into my car. I was walking the streets hoping to find they'd tossed more bags as the items were pretty useless to anyone but me, with the exception of the new baby clothes, kids toys I'd bought and a bag of medical papers & supplies from the hospital.

While walking I was asking anyone I saw out the front of their house or yards if they'd seen any bags around or could keep an eye out. This is when I came across Sia – just out the front in his yard. Being distressed & upset I didn't recognise him. (Embarrassing now!!)

I asked him the same – if he'd seen anything around or could keep an eye out. He said yes definitely he'd keep an eye out, asked what happened & had a chat with me. He was incredibly nice, compassionate & asked if he could help in any way. I said no thank you, other than keeping an eye out & that the supermarket had my number if anyone found anything. I then finally recognised him as he held his hand out and said introduced himself "well my names Sia & if u ever need anything this is where I am and feel free to come up and ask'.

If I wasn't a raiders fan I wouldn't have recognised him & he was just another person, community member going about their own business.

We had a chat about the Raiders & general things & during that was when he saw I had tears in my eyes from the stress and things I'd lost & desperately looking for. He asked about my kids & if we were ok. He then offered to drive me around the suburb for 5/10 mins to look as I couldn't walk far. I politely declined not wanting to put him out but he insisted. I managed to find a few bits of paperwork but nothing else. He dropped me back to my unit & also gave me some money to 'buy the kids something'. To say I was blown away is an understatement! He was so kind, calm and just an amazing person. And incredibly generous.

He absolutely restored my faith in people & humanity and as a single parent, having my car broken into after my surgery and my child's surgery was the last straw for me.

I'd love this note and my thanks to be passed onto Sia himself. He absolutely changed my day and his kindness, compassion, and genuine caring calmed me down & I was incredibly touched by his kindness. I couldn't believe anyone would be so helpful or kind.

I'd also love if this email could be passed onto the club to the appropriate person as an acknowledgement & to know what one of your players did and my gratitude for it.

I wouldn't have known who Sia was if I wasn't a Raiders fan as he didn't mention anything. He was an absolute gentleman and was genuinely concerned for me, my kids and doing anything that may help. Even just driving me around to look then dropping me back to my unit was amazing as I was in considerable pain from my surgery & emotionally overwhelmed.

I can see why Sia is a leader at the Raiders – his genuineness and compassion was so evident. I was a total stranger walking the streets & he went above and beyond to help me.

I'm incredibly grateful and he absolutely made my day by helping me look, taking me home & making me laugh with his awesome sense of humour. He told me about when he was younger he had his first car broken into & related to that feeling of having something you own & worked hard for broken into, stolen & being left to clean up & the uselessness of those kinds of things happening. He asked how old my kids were and if we were ok, needed anything, felt safe etc. He was just simply amazing. Amazing in being so down to earth, kind and helpful.

I feel this deserves to be recognised and for the Raiders to know what Sia did & how much he helped me.

And if a thank you to Sia himself from me could be passed on I'd be so grateful. He made my day & restored my faith when I was very low after everything we'd been through.

Naturally, he didn't have to do any of what he did, but he did and did it off his own back and in his own time and I'm so grateful for everything he did for me that day.