Joe Tapine is in danger of spending two crucial matches in the grandstand as the Canberra Raiders look to resurrect their stuttering NRL campaign.

Tapine and Josh Papalii will make decisions at midday on Tuesday as they consider fighting their respective charges at the judiciary, after being placed on report during a frustrating loss to St. George Illawarra. 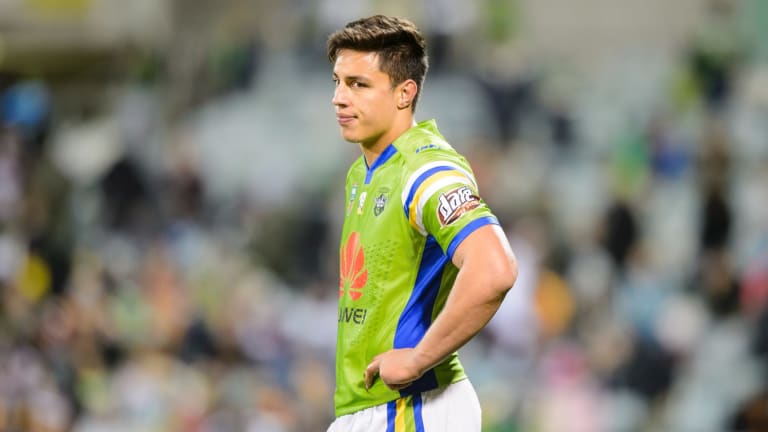 Joe Tapine is facing a fortnight out of action.

Tapine will miss two weeks with an early guilty plea, meaning he is very unlikely suit up for the Raiders when they host the Manly Warringah Sea Eagles at Canberra Stadium on Friday night.

The Raiders back-rower was charged with a grade one shoulder charge on Dragons fullback and will miss two weeks with an early guilty plea, which will also leave 95 carry-over points against his name.

Papalii will escape suspension despite being charged with a grade one careless high tackle on Dufty, with the Canberra lock fined $1500 – which can be reduced to $1350 with an early guilty plea.

While Tapine admits he will "just have to live by" the decision as he prepares for a stint on the sideline he has backed his teammates to turn their season around.

It comes after they crumbled with the game on the line against the competition front-runners to remain two wins outside the top eight.

"It’s a short turnaround, the only way you can solve it is is being on the footy field. It will be good to be back on the field quicker rather than later," Tapine said.

"It will be good for the boys just to let this one go, it’s a big opportunity we let slide [against the Dragons]. We’ll just move onto the next game and the rest of our season.

"I don’t really know [what the problem is], I think it’s a bit of fatigue and miscommunication in the game. It just lets us down a bit.

"Probably just too many mistakes, not sticking to our structures and just letting them running away with it a bit. In a couple of our sets we just needed to close them out a bit better. At the end of the game we need to just sharpen up our attack."

Tapine's absence could open the door for Liam Knight to earn a first grade recall against his former club, with young gun Jack Murchie emerging as an outside chance.

The loss of the Kiwi international is a huge blow for the Raiders given he has been one of the more impressive forwards during an indifferent start to the season.

A dejected Papalii says a short turnaround does help but it certainly didn't lift the mood on Canberra's six-hour bus trip back to the capital after losing to the Dragons in Mudgee.

The Queensland Maroons hopeful admits there is "only one way" the Raiders can go and that is "up" after slumping to a second consecutive defeat.

"It’s the only chance we’ve got, hopefully we bounce back and get our season back on the way," Papalii said.

"The boys are pretty disappointed. There is only one way we can go and that’s up. Hopefully we turn up on Friday and do the job."

Manly will enter the clash without hooker Api Koroisau after he copped a one-game ban for striking during a melee with the Melbourne Storm.

The same brawl has also left the club without five-eighth Dylan Walker for six weeks after he suffered a fractured eye socket after being punched by Melbourne centre Curtis Scott.

The Raiders have a bye following the Manly clash before hosting top four staple Penrith on June 8 – two days after the State of Origin series opener.