The Canberra Raiders have shut the door on the prospect of luring Aaron Woods to the capital with his price tag outweighing the club's need for prop forwards.

Woods is reportedly being shopped around just six months into a four-year deal with the Canterbury Bulldogs with the club desperately trying to alleviate salary cap pressure. 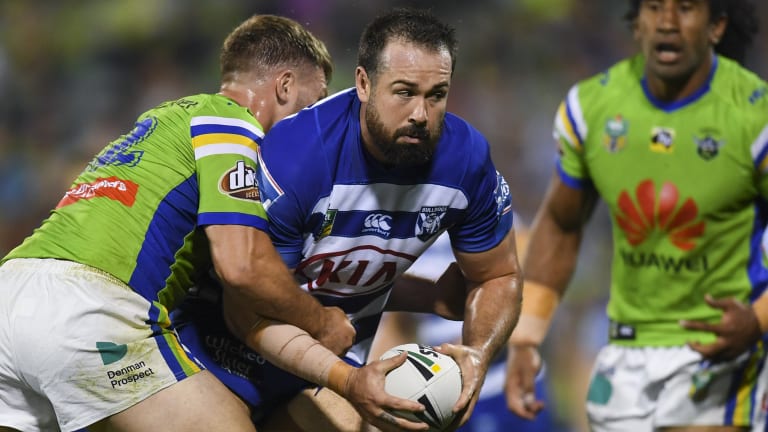 Aaron Woods won’t be switching to lime green next year.

The Raiders are in the market for new front-rowers with Shannon Boyd and Junior Paulo both taking up big-money offers from rival clubs at the end of the season.

Canberra are hopeful of locking down Englishman Ryan Sutton in the coming weeks while Josh Papalii is "all but" done, and the club is edging closer to locking in Dunamis Lui on an extension.

The Bulldogs are facing the prospect of not being able to bring in any marquee players until 2021 with the club battling to cope with heavily back-ended contracts signed during Des Hasler's tenure as head coach.

They are struggling with Woods' hefty price tag and while the Newcastle Knights have emerged as a potential suitor, it isn't one the Raiders are willing to take on.

"He hasn’t [lived up to the price tag] and it’s not his fault, it’s the idiots that paid him. I looked at his stats the other day, him and [David] Klemmer on stats are that far ahead of the prop they’ve selected [for NSW] it’s not funny. Everyone is bagging them and I think they’re doing great.

The Raiders have tabled an offer for off-contract prop Lui but Mulholland won't be rushing to lock in the deal with the NRL squad taking time off over the bye weekend.

Lui made his first start for the Green Machine in a thrilling win over Manly last week and he is keen to "set the standard in the middle" with Paulo sidelined with injury for up to seven weeks.

"Junior is a hell of a player, we’d be a lot better on the bench [when he is fit] and he is a starter as well. I’m happy wherever I am, I just put my hand up and try to do my job for the team.

"We always knew that we had good depth there. For Charlie [Gubb] and Liam [Knight] to come in and really do a job for us, it really helped us out. I’m just glad we dug deep for each other and we got over the line."

Lui is hopeful he will re-sign with the Raiders soon and he has left negotiations in the hands of his manager.

"I’ve been with him since I was 14 years old, so I trust him to take care of it and just keep me in the loop with what’s happening. Hopefully I get a deal soon," Lui said.

"The last two games were really close losses so we really needed that win. Going into the bye, that makes four points, so hopefully coming out of the bye we really get things going again."

The Raiders sit on the cusp of the top eight heading into the bye in round 13 following a close win Lui hopes will reignite Canberra's finals hopes.

But coach Ricky Stuart maintains the Raiders can give the premiership a shake and Lui believes snapping the close game hoodoo will lay the foundations for a charge into finals contention.