Jarrod Croker has lauded a peaking Josh Papalii as one of the NRL's best with his imminent re-signing set to be a massive boost for the club.

Papalii is inching closer to striking a new deal with the Raiders as he prepares for a clash against the ladder leading St. George Illawarra Dragons at Mudgee's Glen Willow Stadium on Sunday. 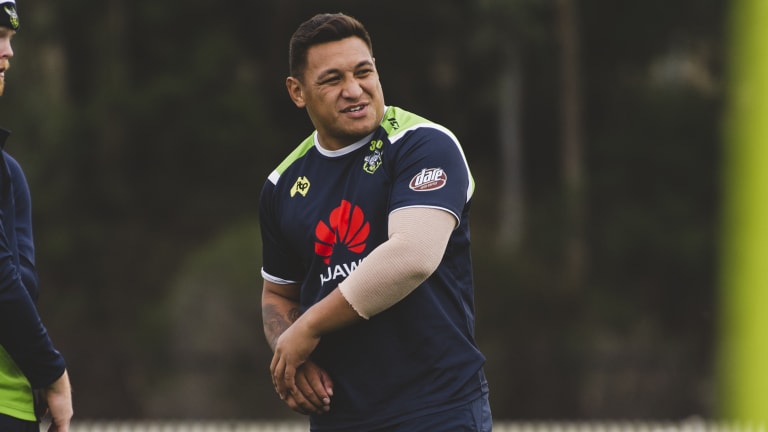 Josh Papalii is close to signing a new deal.

Croker remembers watching the Dragons run riot in the season opener, sitting back and thinking "they’ve got a really good forward pack, this mob".

Since then they have been the best side in the competition and Croker is looking to Papalii to lead the way in a "big test" for the Green Machine pack to aim up.

"He’s been massive Paps, since he had a stint in Mounties and came back he has been one of our more consistent players," Croker said.

"I thought he had his best game last week in the 13 jersey. They’ve got a lot of good players across the board, the Dragons, but he is a hard man to handle, Papa, at the best of times.

"When he is at peak fitness and playing his best footy he is one of the best in the competition. We’re hoping he continues that form not only for this year but for coming years. Hopefully he can sort that out as well and he is hanging around."

Papalii's retention looms as a massive priority with Gold Coast-bound prop Shannon Boyd and Junior Paulo set to walk out the door at the end of the season.

It has left two unassuming Raiders front-rowers in a position to stake a claim as the men that can lead the Green Machine forward in Charlie Gubb and Dunamis Lui.

Lui is edging closer to re-signing with the Raiders while Gubb has returned to Ricky Stuart's top squad in the wake of a foot injury that will keep Paulo sidelined for up to nine weeks.

"I thought Dunamis has been great for us off the bench. He has probably been a bit of a silent achiever and probably doesn’t get the accolades he deserves," Croker said.

"He has been great off the bench and he is another one I think is off-contract as well so he’ll be looking to put his best foot forward.

"If Junior goes and with Boydy leaving – you don’t work with the same people forever do you – it’s a good chance to put a good case in with the side we’ve got this year."

However Canberra are close to signing Englishman Ryan Sutton but remain unsure if they will be able to snag his Wigan Warriors teammate John Bateman.

Croker says losing big-name players is just "the nature of the beast" and remains confident Boyd will "give 110 per cent" until the curtain comes down on his time in Canberra.

The Raiders have managed to avoid a huge player turnover over the past few seasons but they will meet a man they were forced to let go against a firing Dragons outfit in NSW Blues candidate Paul Vaughan.

He has been a key cog in a pack that has set the benchmark this season alongside England international James Graham, Tariq Sims, Jack De Belin, and Tyson Frizell.

"It’s a business. While it’s disappointing and you don’t want to lose those players, there’s been players here that we really wanted to keep," Croker said.

"It’s disappointing at times to lose players and we don’t want to lose Junior and Boydy and guys like that but unfortunately it’s just the way it is."