It's a massively important year for the Canberra Raiders as they look to return to the NRL finals after a two-year absence.

Back-to-back disappointing seasons saw the Green Machine finish 10th on both occasions, with the excitement created by a stunning 2016 long gone. 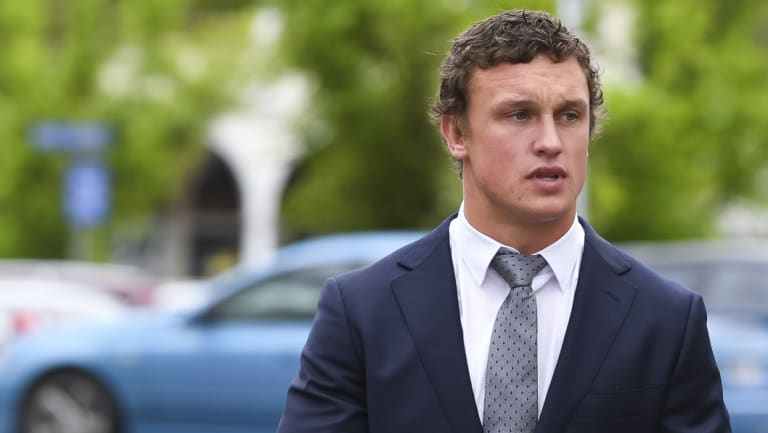 Raiders fullback Jack Wighton will look to get his career back on track in 2019.Credit:AAP

Not many pundits are predicting a return to the finals next year, but that's exactly what the Raiders need to do.

Crucial to that will be keeping their star players fit and firing on the park, with injuries and suspensions cruelling their 2018 campaign.

They will have a trimmed down, more mobile pack, bolstered by the arrival of a couple more Englishmen and will be relying on Aidan Sezer and Sam Williams as their main play-makers.

Here's the set of six stories that could define their year.

Raiders fullback Jack Wighton missed almost half of the 2018 season because of a drunken rampage in the pre-season that saw him found guilty of five counts of assault and one of urinating in public.

The NRL banned him for 10 games and fined him $30,000, while the ACT Magistrates Court fined him $3500, placed him on a one-year good-behaviour bond and gave him a two-month suspended jail sentence.

It saw him sit out the final two-and-a-half months of the season.

The Raiders missed his attacking flair from fullback in the back half of the season, while co-captain Jarrod Croker rates him as one of the best defensive fullbacks in the NRL.

But he could also be an option at five-eighth, with the Raiders struggling for depth in the play-maker roles following the departure of Blake Austin to England and Ata Hingano's shoulder reconstruction ruling him out of the opening rounds.

Regardless of where he ends up, Wighton needs to get his career back on track, starting with round one against the Titans on the Gold Coast.

ALL EYES ON RICKY STUART

After five years in charge for only one NRL finals campaign, the pressure will be on Raiders coach Ricky Stuart to get the team back playing at the level they managed in 2016 – when they were within one try of making the grand final.

He'll be working overtime with a squad that's largely unchanged to turn that around after finishing 10th the last two years. 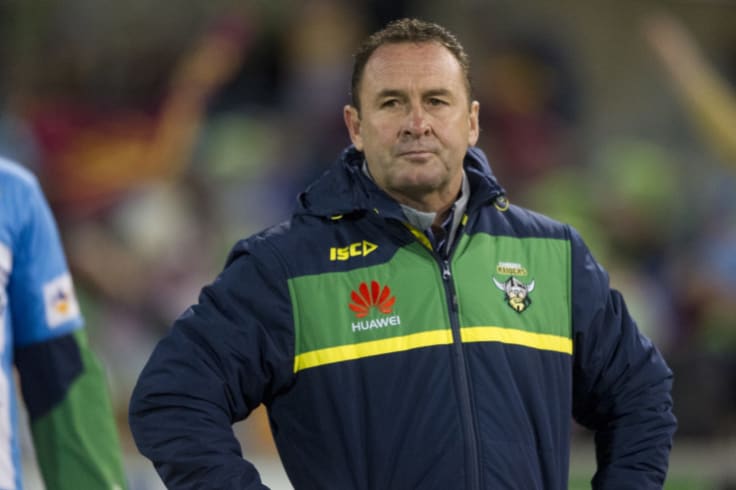 Raiders coach Ricky Stuart has revamped his coaching staff as he looks to take the Green Machine back to the NRL finals.Credit:Jay Cronan

The Raiders board re-signed Stuart halfway through the 2017 season, extending him for another two years until the end of 2020.

The pressure will also be on the board if the Raiders fail to fire in 2019.

He's the young prop with the flaming red hair and Raiders co-captain Josh Hodgson has picked him as a player to watch next year.

He's yet to make his NRL debut and starts down the props pecking order, but Hodgson has liked what he's seen of the 20-year-old so far.

"I think he's got something about him that it doesn't matter who you are he doesn't want to get beaten by you and you need that as a footy player," Hodgson said.

"I'm excited to see how he goes this year. He's had a little bit of a niggle in this pre-season, but he's one for me who's going to be my one to watch.

"He's got a lot of potential, but potential needs hard work beside it and he certainly does that. He's got the crazy side to him, he's got the tough side to him."

FORWARDS PACKING IT DOWN

They've lost two of the biggest boppers in the NRL, but Hodgson is excited by the combination of senior players and emerging young guns.

He felt while having a big forward pack can be a positive, it can also prove a weakness at times as well.

Hodgson said they had a good balance between size and having "great engines" for the upcoming campaign.

"We've still got that punch with the likes of Josh Papalii and Sia Soliola and Dunamis Lui, and Ryan Sutton's got a great engine on him and is a great footy player," he said.

"We've got so many kids that are pushing this year I think the environment's really strong.

"We have lost that size but that can be pros and cons in games.

"It can bend the line back when you need it to, but on the other side of things when you're under the pump it can sometimes be your Achilles heel a little bit. 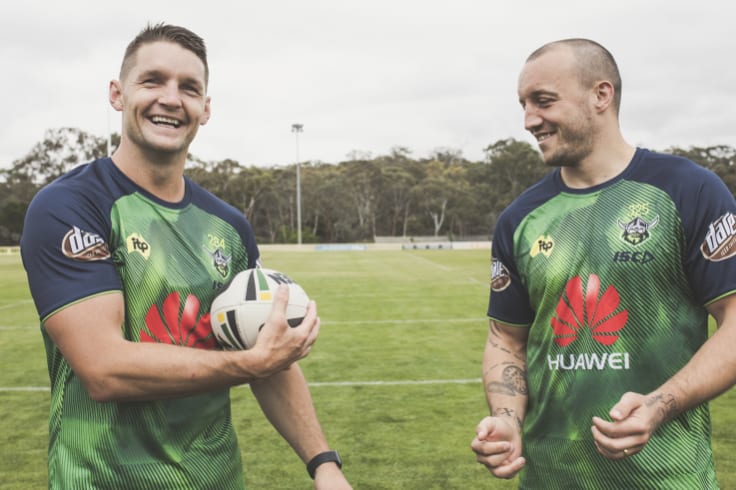 "It's a different kind of pack, but I'm really excited. I think we've got a really good balance in terms of size and great engines."

CO-CAPTAINS TO NEXT LEVEL

Stuart made Hodgson a captain alongside Jarrod Croker for the 2019 season.

Lewis felt having both fit for the entire year was crucial to the Raiders' chances after they both missed large parts of 2018 due to injury.

"Having [Hodgson] as co-captain will give him that little bit more leadership of the side. He's going to thrive on that," Lewis said.

"I don't know him personally, but knowing the way he plays I think he'll thrive on that.

"And having Crokes back on the park – he kicks goals from anywhere, scores tries from anywhere and he's just one those blokes all the boys love to play with … what he can do on a footy field not many people can do.

"Keeping those two guys on the field will go a long way to getting a grand final win." 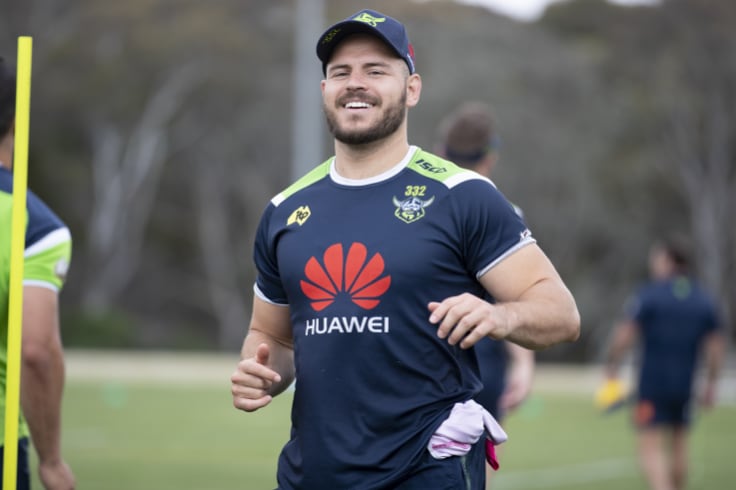 Hodgson says halfback Aidan Sezer will lead the team around the park.Credit:Sitthixay Ditthavong

Hodgson and Wighton are play-making options for the Raiders next season, according to the new co-captain.

They've lost Austin and Hingano (shoulder) will come in late, leaving Williams and Sezer as the only recognised halves.

Hodgson expected Sezer would be the one running the team.

"We've got options. We've got Sammy and Seze, you've got Jacko out the back who's fantastic for us last year – he can also play a bit of six," Hodgson said.

"There's been times when even myself I've jumped in the halves and Liva's been at nine when we've had an injury.

"It's going to be a good year. No matter who is in our halves it's just important we're all on the same page.

"We've got such good strike options on the edges it's important we use them up. I don't think our halves really need to do anything flash it's just about us being a bit more consistent in terms of completions."

BIGGEST STORY OF 2018: Jack Wighton's brush with the law happened before they'd even played a game and didn't come to a close until well after their season had. He'll be hoping to put all the drama behind him and let his football do the talking next year.

RAIDERS STAR ON VERGE OF BLUES: Raiders winger Nick Cotric shot into State of Origin contention when NSW Blues coach Brad Fittler named him 19th man for the series opener against Queensland. Will again be in the mix as the Blues look to defend the title.

SAINT SIA: As turmoil surrounded the off-field behaviour of NRL players, there was one constant shining light coming out of Canberra. Raiders veteran Sia Soliola helped the homeless by feeding them and toughing the Canberra cold, as well as growing his ‘fro for a good cause and helping distressed neighbours.

IMMORTAL MAL: Raiders legend Mal Meninga is now an Immortal. The superstar player has become the superstar coach and deserves all the accolades he gets.

EMOTION CHARGED: Former Raider Kato Ottio's tragic death rocked the Green Machine early in the year. But they rallied around Ottio's family, bringing them out to honour him at their home game against the Newcastle Knights and raising funds to go towards buying the family a home.

WHO TO WATCH IN 2019: The Raiders have added another two Poms to their squad, with John Bateman coming Down Under with plenty of wraps. If he can prove to be as big a hit as Josh Hodgson and Elliott Whitehead then he'll definitely bolster the Raiders' forward pack.

THE STATS THAT MATTER 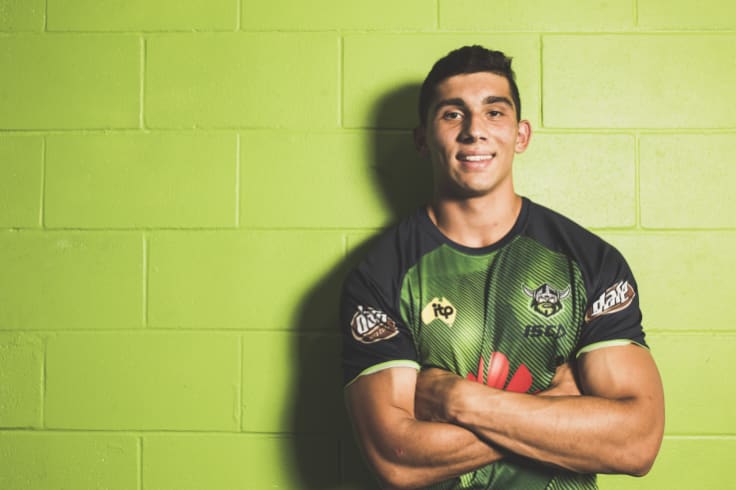 Round one: Raiders 28 lost to Gold Coast Titans 30