It's not just a raft of world-class second-rowers fighting for spots, but Canberra Raiders hardman Elliott Whitehead says there's a couple of youngsters keeping them honest as well.

Jack Murchie and Hudson Young have impressed him during the pre-season since he joined the squad late due to his international duties with England. 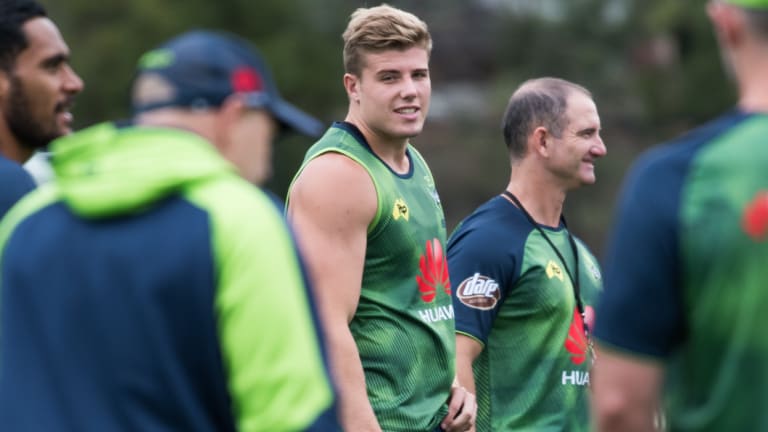 Whitehead's one of four internationals fighting for spots in the Raiders forward pack, along with Josh Papalii, Joe Tapine and John Bateman.

The 29-year-old felt it would be an England and New Zealand back row, with himself and Tapine in the second row and Bateman an option at lock, while Papalii would shift to prop.

He said the competition for places would ensure there was no complacency, especially with some youngsters staking their claim during the off-season.

Whitehead has been working closely with Murchie and Young, helping them push to be part of the Raiders' team when they begin their NRL season on the Gold Coast against the Titans.

Murchie made his NRL debut last year, playing against Cronulla and Melbourne, while Young came through the Raiders' NSW Cup affiliate Mounties under-20s to earn a spot in the top 30????.

"It's not only us four, there's some young kids as well like Jack Murchie and Hudson Young as well," Whitehead said.

"They're training really hard and they're definitely wanting to push for those spots as well.

"It's good competition at the moment in those positions and it can only be helpful for our team and our depth as well."

They're the main ones he's noticed, given he's been working with those two the most as fellow second-rowers, but he said they weren't the only ones staking their claims.

Forward Emre Guler played the final three games of the Green Machine's 2018 campaign and he'll be in the mix for a spot on the bench – at the very least – against the Titans on March 17.

He also felt 17-year-old centre Sebastian Kris had been training the house down.

Jordan Rapana's shoulder reconstruction has opened the door for an outside back to put their hand up for the first half of the season, although veteran Michael Oldfield's the favourite to get first shot on the right wing.

"It's good to have those youngsters hungry to take those positions and training hard, it makes training a lot better and you can tell that in its intensity."