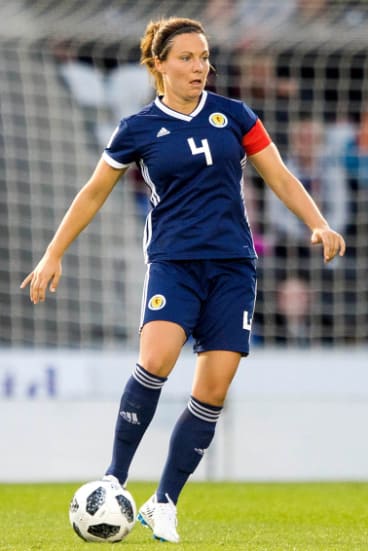 World Cup-bound Scotland captain Rachel Corsie had always wanted to play in the W-League. So when Canberra United coach Heather Garriock came calling, it was an easy decision.

The 101-capped international spent this winter taking the Utah Royals to within one win of the play-offs and Corsie said it was a privilege to sign with Canberra.

"It's been something I've looked at over the last few years, I always wanted to play here and a number of top players have come here, especially from the States," Corsie said.

"The leagues seem to work out well in terms of seasons and [the W-League] is something I really wanted to put on my CV and I want to be successful here.

"Heather reached out again this year and I felt the club was all about the team and the values I have and it was just what I was looking for, it was the perfectly opportunity and I'm really excited."

Corsie will use the W-League season to tune up for the Women's World Cup in France next June after she led Scotland through qualification earlier this year.

The uncompromising defender will enjoy seven weeks between her final fame in the NWSL and Canberra's season opener on October 28.

"The World Cup was another reason I wanted to play this [W-League] season but I wanted enough time to finish in the US and get fresh for this season, not have it squeezed in," Corsie said.

"I had 10 days off [after the NWSL] but in previous years the seasons have almost crossed over, this year it allowed for that little bit of a break before building back up

"I'm feeling good and team looks great, the players look good. It's a great bunch of girls and I'm enjoying getting to know them."

Garriock has almost revealed her entire squad, with another international recruit and guest-player still to be named.

“Rachel has already proven herself on the biggest stages and to have her here at Canberra United is just  fantastic,” Garriock said.

“She has demonstrated her ability in training already and I can’t wait to see her out on the pitch when the season starts.

“I was drawn to Rachel’s leadership quality and her winning mentality, and those are both attributes that will be instrumental to a successful season this time around.”