Alison Bai finally cracked her first WTA singles main draw this week and the Canberra tennis player has some advice for the next generation.

Bai's appearance in the opening round at the Hobart International came almost 15 years in the making and she said learning to relax was behind the breakthrough. 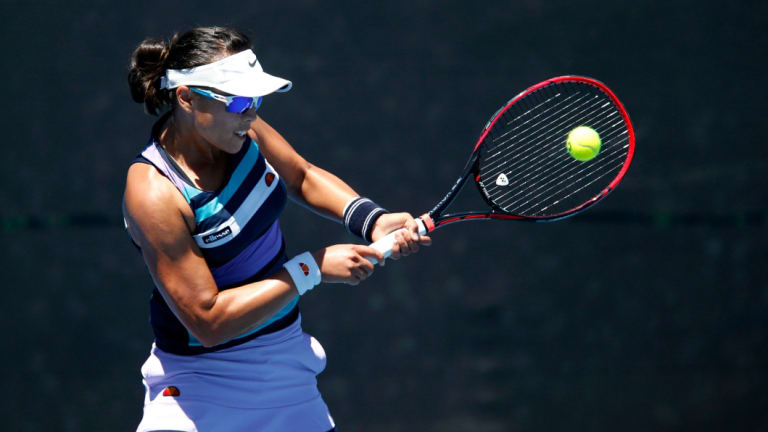 Alison Bai has enjoyed the most successful week of her career. Credit:Darrian Traynor

The 28-year-old has been playing professional events since 2004 but Bai admitted it has only been recently she's learned not to put so much pressure on herself.

Bai beat the first top-100 player of her career, Anastasia Potapova, and then Olivia Rogowska in the Hobart qualifiers to earn her main draw match against former world No. 11 and current No. 35 Alize Cornet.

Bai was on serve for the first seven games of the match before a back spasm hindered her progress and she eventually fell 6-4 6-2.

But the world No. 380 said she still took plenty of confidence knowing she could hold her own with one of the best players in the world.

"It was awesome, I had a really good time playing out there in front of a big crowd and against a top-50 player who has been there for 10 years, it was a great experience," Bai said.

"It was a competitive match but unfortunately I had a back spasm in the first set. That was hanging in the back of my mind and I wasn't able to play at 100 percent but at the end of the day I felt like I played well considering it was my first tour main draw.

"I was in most of the rallies and obviously some of the decisions I made was from a lack of experience but most of the time I felt like I was in it.

"She played quite well in the big points and stepped up when she needed to but it definitely gives me a lot of confidence, especially being the second tournament of the year."

Bai said she has been working on her mental game and realised the expectations she put on herself she was only making things harder.

"I've just been more relaxed, obviously I'm a lot older now and coming almost to the end of my career and I'm not taking it too seriously so to speak," Bai said.

"I'm not putting too much pressure on myself and am just going out there enjoying being able to play and compete at these events with all these great players. 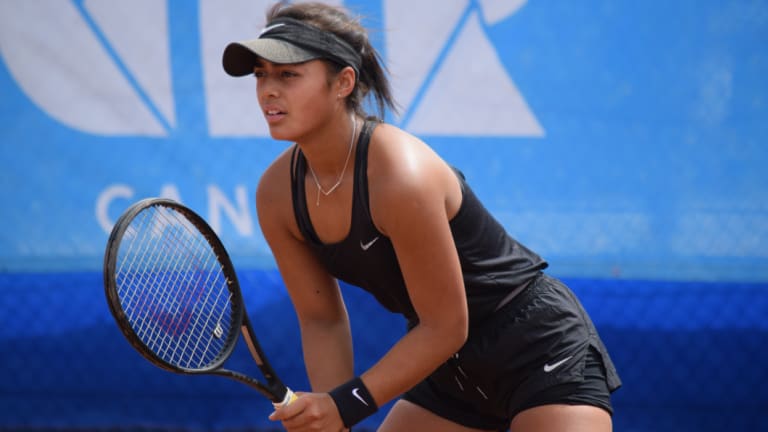 "When I was younger I put a lot of pressure on myself to do well and reach goals and sometimes it gets too much when you put that much pressure on yourself.

"I played today just thinking I never know if I'll get this opportunity again so just have fun and do your best, which is all you can do."

Bai entered the doubles alongside fellow Canberran Annerly Poulos on her 16th birthday. They faced Potapova and Dayana Yastremska on Tuesday night.

Bai made the doubles semi-finals at the same tournament 12 months ago but said her only goal this year was to bring the best out of Poulus.

"I'm really excited for Annerly. When I was her age being in this environment and playing a tour event I was so nervous," Bai said.

"I feel confident I can pass on the lessons I've learned over the years and try to get her to have fun and really just enjoy these experiences.

"Knowing her over the years she can get temperamental and angry on court sometimes so my goal is to make her laugh as much as possible. If you're having fun and are smiling you tend to relax naturally.

"It's a little bit ironic we're both from Canberra and I'm coming towards the end and she's only just starting, so hopefully I rub off a bit on her and she can take it to the next level."

Marc Polmans was the only other seeded player to fall with Sadio Doumbia dispatching him in straight sets.