Friday nights at Canterbury are receiving a vibrant tag while James Cummings was surprisingly enthusiastic about the Starlight Stakes at Rosehill Gardens on Saturday that was hardly a good result for Godolphin.

Perhaps the waft of the food outlets plays a role but independent racegoers not spin doctors, report Canterbury under lights is also a hub of punting activity from a strong local element. 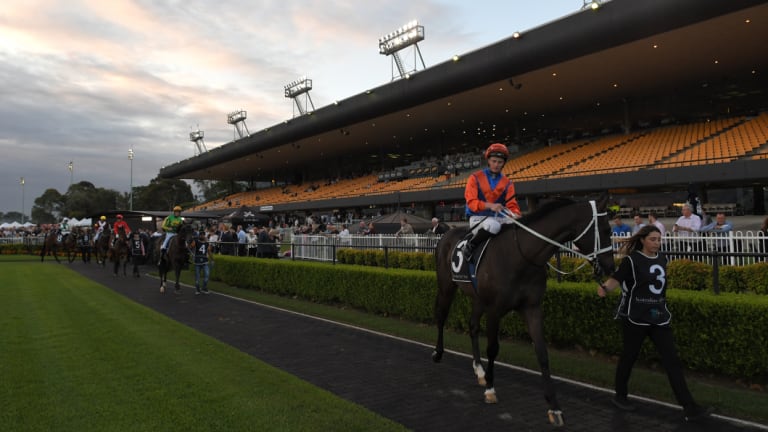 Vibrant: Canterbury’s night racing has been compared to the halcyon days of Harold Park.Credit:AAP

Certainly the senses were not stimulated at Rosehill the following day which produced a couple of major negatives.

Cummings, however, got on the front foot about the prizemoney increases, highlighting the Starlight Stakes and the quality of the winner Invincible Star who had just beaten Godolphin’s Badajoz under dubious circumstances.

Badajoz was a neck in arrears but jockey Brenton Avdulla declared a kilo over weight to 54kg. Jockeys are allowed to ride heavy much to the chagrin of weights and measures form analysts.

A kilo equates to over a half-length so on the figures Badajoz would have scored ridden at his handicap assessment.

Weight is important as emphasised by Glyn Schofield after he won on the Cummings-trained two-year-old Athiri in the Made Your Look.

Schofield arrived on course still 2kg above Athiri’s 54kg but managed to shed the excess in time.
When the campaign started to raise the limit weight from 49kg due to the argument men are getting bigger an old trainer told me: “It doesn’t matter what the limit is jockeys will always ride over. They don’t want to waste.”

Which raises the question of whether fit or famished jockeys are better for the industry? With more overweights being accepted should the 53kg bottom line be ditched with critics maintaining the current trend will lead to elephant riders on horseback.

Yes, unpalatable but so, too, are the middle distance and staying events on Sydney Saturdays, which confirmed last week they are a no go punting proposition as far as I’m concerned.

Take, for instance, the ATC Tipping Handicap over 2400 metres in which Tamarack, the $5 equal favourite, was beaten over 14 lengths while The Bandit, at the same odds, finished sixth after never looking likely.

Before the race The Bandit was so hot he could evaporate despite trainer and media personality Richard Freedman, walking with him to keep a lid on the boiling pot.

Earlier Savacool, the $2.30 favourite in the five-horse ATC Cup, failed to finish, stopped by cardiac arrhythmia, an affliction that thankfully has only come into play in the last 25 years.

Still, those put into reverse from the heart problem have been known to do exceptionally well at their next starts.

Anyway Savacool has come down twice with it. Third time out?

No doubt it can be argued that it was just a bad day. Savacool’s race went
to stablemate Exoteric, a winner on October 20 in the City Tatt’s Cup at Randwick while favourite High Bridge, another prepared by Chris Waller, was more than 10 lengths astern.

Obviously there are other races more palatable, even sprints like The Starlight Stakes.

A week earlier Cummings questioned me regarding the better figures – strike rates – of present-day trainers compared to their counterparts.

To me a worthwhile strike rate is when a horse wins and the stable money is on, coming from an period when trainers survived on the punt and not prizemoney.

I alerted him to Cap D’Antibes and The Master. Of all the majors Bart Cummings had to his credit one of the most significant was Cap D’Antibes in the 1975 Lightning Stakes at Flemington.

The record shows Cap D’Antibes triumphed at 20/1 but the support was so great in the Randwick betting ring, serviced by bookmaking giants JE Waterhouse, Arthur Browning and Jack Pick, they wouldn’t take any more bets on the mare.

Now that was a strike rate.