Cardiff City have been dragged into a legal row with Nantes over the Emiliano Sala tragedy after the French club sent a demand for full payment for the £15 million deal.

A legal letter from Nantes was emailed to Cardiff on Tuesday – the second demand in the space of a week – to request urgent payment. The Welsh club is understood to be taken aback by the timing of the correspondence as underwater rescue teams are still in the process of retrieving the plane in which Sala is believed to have died. 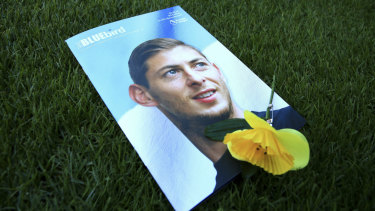 Nantes have sent a demand for payment to Cardiff, though investigators are still attempting to recover a body from the plane’s wreckage.Credit:PA

Cardiff had previously frozen payments while the police and air accident officials investigate the circumstances surrounding the tragedy two weeks ago.

Nantes, who were not immediately available for comment, are understood to be threatening legal action if they do not receive a payment within 10 days. A source at Cardiff says they will honour the contract, but not until they have clarified all the facts.

Among those due to be paid for the deal is the businessman Willie McKay and his son Mark, who acted as intermediaries.

Mark McKay was acting on behalf of Nantes so will demand payment from the French club. The pair have confirmed they made arrangements for Sala's doomed flight, but said the journey was due to be free of charge for the player.

Cardiff manager Neil Warnock has described how the tragedy has made him question his future, but the club rejected claims he could quit. It is understood Warnock was reassured about his position in a phone call this week with the chairman, Mehmet Dalman.

Sala had become Cardiff's record signing just three days before the Piper Malibu disappeared. Warnock was reduced to tears after the club's home win over Bournemouth on Saturday but insisted that his future remains with Cardiff.

"I've spoke to Mehmet Dalman and our relationship is so close, he knows my feelings," Warnock told Wales Online. "Over the past few weeks, there have been times when I thought, 'Is it worth it, being a football manager after all that's happened?' But I'm looking forward to [the rest of the season]. I've got a responsibility to the club."