World Rugby has called for a greater consistency from referees when they hand out red cards but will not ask officials to show too much leniency, chief executive Brett Gosper said on Sunday.

A crackdown on head-high tackles has seen a surge in dismissals but opinions have been split on whether the punishments were often too harsh. 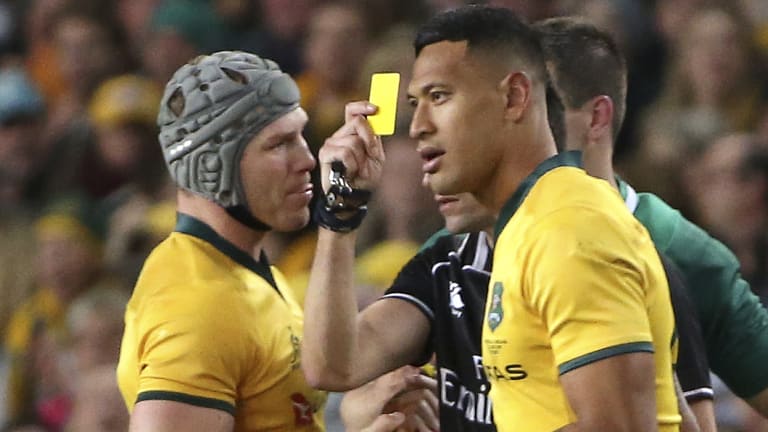 Consistency: Israel Folau’s yellow card for his attempt at a high ball against Ireland was widely debated.

"We're trying to lower the tackle height so we can reduce the incidence of concussion and injury, and we know from evidence that that's what that does.

"We just have to be consistent and make sure it's very clear what we mean by a head-high tackle or a tackle that's too high… We'll get there, but you always go through this period of people believing there are too many cards because you're adjusting player behaviour."

The TMO (television match official) and the disciplinary process around the issuing of red cards have been under heavy scrutiny with southern hemisphere coaches querying decisions and criticising protocols.

The body's chief executive Andy Marinos said in July they felt referees needed to take control of games again, with the TMO providing "context to the officials' decision making".

"There weren't particularly many sensitivities in other parts of the world to be honest, but we have looked at it and I think there will be some positive change but I can't pre-empt that until those discussions are had in the rugby committee."