Carlton presented to the AFL Commission on Wednesday morning as the league contemplates what special assistance the club should receive to help make the Blues more competitive as they come off their worst season since 1901.

The Blues delegation of CEO Cain Liddle and president Mark LoGiudice presented their strategic plan to the commission and discussed their strategy for on-field improvement, including the potential of being granted a priority pick. 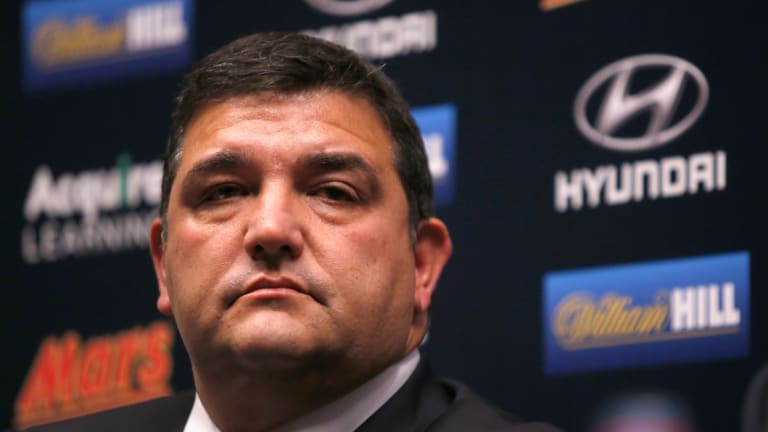 Although the meeting with Carlton was not out of the ordinary, as the AFL Commission catches up with a club each time it sits, the discussion carried a more urgent edge given the Blues' performance in 2018.

Any priority pick, if granted, could be crucial to the club's chances of re-establishing some depth in the range of players aged between 22 and 26, given they are loath to relinquish pick No.1 and their next pick is 25, as a result of swapping picks with the Crows last year when trading Bryce Gibbs.

However Fairfax Media understands the discussion focused broadly on the ways the AFL would be able to assist, including fixtures or other components of the football program.

Such discussion was only a precursor to any decision being made on the pick, with the AFL executive having to make recommendations to the AFL Commission about whether any special assistance should be granted and what form it should take. The commission decision is not expected until the next time they meet – on the Monday before the grand final.

The club has resisted calls for the Blues to apply for special assistance with Liddle telling Fairfax Media in May "we got ourselves into the situation and we’ll get ourselves out of it".

However that declaration came after round 10 and the Blues went on to finish the season with just two wins for the first time since 1901 and win the wooden spoon with a percentage of 59.3.

They have since softened their stance somewhat with the AFL keen to ensure they are more competitive in 2019 given the Blues have now played 55 consecutive games without reaching 100 points and suffered three losses by more than 100 points this season.

Although opposition clubs have expressed concern at handing out a selection to the Blues given they had a deliberate strategy to trade out mature players for draft picks and have stockpiled young talent such as Patrick Cripps, Paddy Dow, Charlie Curnow, Sam Petrevski-Seton, Jacob Weitering, Lochie O'Brien, Caleb Marchbank and Lachie Plowman, the lack of competitiveness has not only affected television ratings in 2018 but the fairness of the fixture.

One solution potentially being explored is granting a pick to be traded or giving lower clubs access to mature-aged talent.

The Blues' performances meant attendances were down this season on projections but they are still expected to make a profit and are in a good position off-field to maximise returns when their on-field performance improves.

Carlton have been linked with Adelaide Crows forward Mitch McGovern, who requested a trade from the Crows on Tuesday despite having two years remaining on a three-year contract, which he signed this time last year.

A priority pick appears critical to the Blues' hopes of securing the forward although they could also offer a future selection to the Crows if they wanted McGovern.