Carlton are one of at least three clubs that will have their application for special assistance heard by the AFL Commission next Monday.

The Blues, who finished on the bottom of the ladder with just two wins in 2018, are understood to have joined the Gold Coast and the Brisbane Lions in making applications for assistance that could include priority draft selections. 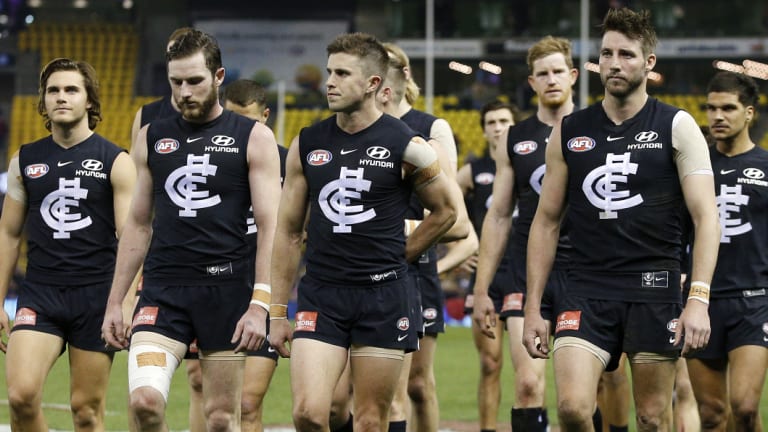 The Blues capped off a dismal season with 100-point losses in rounds 22 and 23.

Fairfax Media understands the clubs have been in regular dialogue with the AFL since the end of the season around the scope of rule 19, which deals with special assistance, determining what support might be available to make them more competitive.

Carlton's stance has changed since they declared in May they would not seek a priority pick, with their lack of competitiveness in 2018 forcing them to reconsider their position.

Their CEO Cain Liddle and president Mark LoGiudice fronted the AFL Commission in August as part of regular club presentations to the Commission, with discussions around a broad range of issues including picks, fixturing and other components of the football program.

Although the proposal for special assistance will be considered at next Monday's AFL Commission meeting a decision is not expected until after the grand final.

The AFL is keen to avoid the discussion interrupting the finals series.

The Blues' season was the club's worst since 1901. They won just two games to finish on the bottom of the ladder with a percentage of 59.3.

They have not kicked 100 points for 55 consecutive games and their only wins this season came against non-finalists, Essendon and the Gold Coast.

Depleted by injury, the young Blues lost two of their final four games by 100 points to have three 100-point losses for the season.

However they have made change this year with Liddle joining and Brad Lloyd appointed football manager.

The Suns, who won four games for the season, have also submitted an application for a priority pick with a long-term plan being considered to simultaneously foster player retention while bringing in young talent.

The fledgling club is set lose its co-captain Tom Lynch to premiership contenders Richmond through free agency and has not played in a final since joining the competition in 2011.

However the Suns are attempting to reboot the club under handpicked CEO Mark Evans and rookie coach Stuart Dew. They have also rejigged their football department in the past year, appointing a new football manager and list manager.

They are expected to receive a first-round selection (pick three) as compensation for losing Lynch.

'The Brisbane Lions will also have a submission considered despite the positive direction the club appears to be heading under coach Chris Fagan.

Although they appear on an upward trajectory they remain in a rebuild phase.