Geelong coach Chris Scott has conceded his side faces a tough mathematical fight to make the finals but his focus is only on regaining their winning groove against Fremantle next Saturday.

The Cats were unable to pinch victory against Hawthorn at the MCG on Saturday, the loss leaving them outside the top eight and needing to win their final two home-and-away matches, against the Dockers and the Gold Coast Suns, and rely on other results going their way, to feature in September. 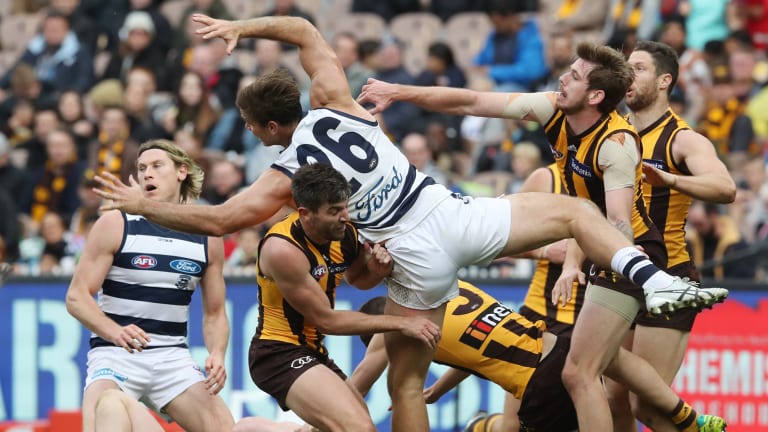 Not quite: Geelong’s Tom Hawkins flies unsuccessfully for the ball.

Goalless in the second term, the Cats trailed by 26 points at three-quarter-time but had a chance to close within a point when Tom Hawkins lined up from 20 metres out with just over three minutes remaining. However, the key forward was unable to convert before the Hawks rubber-stamped victory with the following goal from Jaeger O'Meara.

"The comeback was good. I don't think anyone can accuse us of not hanging in there and believing we can't win when the chips are down but the more pertinent question is, why are we waiting for so long to play that way in a game?" Scott said.

"I think it would be a little superficial to reflect on the game and say one bad quarter cost us but it certainly had a big impact."

As was the case in the loss to Richmond a week earlier, Scott said the Cats had been beaten by an opponent who had used the ball better.

While Patrick Dangerfield was best afield with 40 disposals and Gary Ablett added 32 and three goals, a lack of contributors hurt.

Scott said the Cats had "outplayed" the Hawks in the second half despite only edging their opponents by three points after the main break in a low-scoring but enthralling clash in what has become the greatest modern-day rivalry.

Geelong lost ruckman Rhys Stanley to a calf strain in the second term – he had just returned from the same injury – and it's unlikely he will feature in the crucial final two games. Defender Zach Tuohy nursed a hand injury. 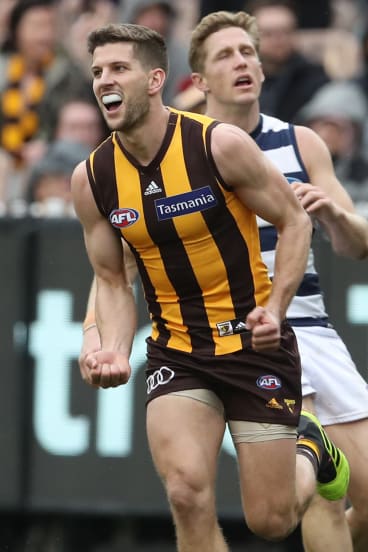 Luke Breust kicks a goal for the Hawks.

"This one makes it harder for us … I would imagine there is a mathematical equation that might make it difficult for us [to make the finals] and I can talk to you about it for ages because I have probably done the ladder predictor 500 times but, you know what, it doesn't matter," Scott said.

"Our responsibility internally is to play as well as we possibly can this week and next week. That's what I would have been saying had we won as well."

Hawks coach Alastair Clarkson praised his team's performance in a "finals-type game" with "finals-type pressure", a victory which elevated the Hawks into the top four.

Emerging youngster James Worpel impressed in the midfield, Tom Mitchell still had 32 touches despite a heavy tag, while the late withdrawal of skipper Jarryd Roughead (ankle) did not matter.

"It's a trademark of Geelong to come with a surge like that late in the game. At the end of the game, we were probably a bit lucky they missed gettable shots in the last five minutes of the game."

The Hawks have St Kilda and the Swans in Sydney remaining on their agenda. Two wins would almost certainly have them unexpectedly earn the double chance.

"We just have to keep winning to see where it finishes up for us. Every side is really in that bracket. The 'Tiges' can probably afford to slip one here or there in the run home but everyone else that is running from second to tenth or eleventh just need to do their best to keep winning games of footy," Clarkson said.

The four-time premiership coach said Roughead had been carrying a "grumbly" ankle for several weeks but remained hopeful he would return against the Saints.