Geelong are unwilling to give up Tim Kelly without a fight after the 24-year-old indicated he wanted to return to Western Australia for family reasons and nominated West Coast as the club he wanted join.

However the Cats said that while they were prepared to consider offers from the Eagles and the Dockers they would not trade him unless a satisfactory deal was struck.

The news became official just hours after Kelly had finished equal runner-up in the Cats' best-and-fairest award in his first season with the club behind Mark Blicavs and tied with Patrick Dangerfield, finishing ahead of Gary Ablett and Joel Selwood.

Kelly has three children aged three and under, including twins born in January, and he and his partner Caitlin need more support in raising their family. 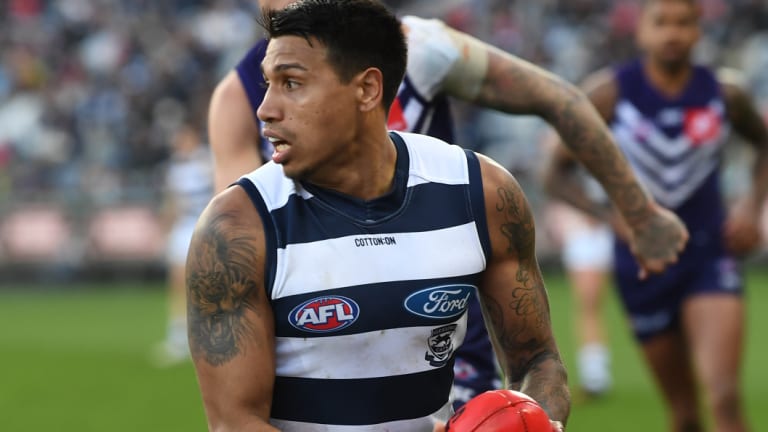 The Cats used pick 24 to select him in the 2017 national draft after he had been overlooked in six drafts and their view is that he is worth more at the trade table than the Eagles' best pick, currently 20.

West Coast are expected to obtain additional picks as compensation if Scott Lycett and Andrew Gaff leave, however Geelong want a higher draft pick than what either of those are likely to be.

Kelly's manager Anthony van der Wielen said he would not be speaking to Fremantle, but the Cats think they are entitled to try to secure the best deal for their player if he wants to return home and should be able to field offers from both clubs instead of being forced to negotiate exclusively with West Coast.

Fremantle CEO and interim list manager Steve Rosich told trade radio the Dockers were interested in Kelly although they were aware his preference was to join West Coast.

The Dockers have enough on their plate. They secured Reece Conca as a free agent from Richmond on Friday while awaiting decisions from Melbourne's Jesse Hogan and their own Lachie Neale, who is favourite for the Dockers' best and fairest.

Hogan, who toured the Dockers and met new football manager Peter Bell and list manager Steve Rosich on Thursday, has headed to Bali for a holiday while he contemplates whether to ask for a trade.

The Demons are expected to want two first-round picks in exchange for Hogan, with the Brisbane Lions offering pick four for Neale, an offer the Dockers intend to reject.

If the Dockers, who hold pick five,  agreed to hand over two first-round picks for Hogan then the Demons will attempt to secure Gold Coast's Steven May with one of those picks. However the Suns are expected to demand more for their contracted captain.

Geelong landed Luke Dahlhaus as a free agent on Friday with the AFL indicating the Western Bulldogs would receive pick 25 as compensation for losing the premiership midfielder.

The Bulldogs may also lose Jordan Roughead to free agency and ruckman Tom Campbell could be on the move. Out of contract at season's end, his future at the Whitten Oval remains up in the air.

It is likely he could be one of the men big men who could join the trade period's inevitable "ruck merry-go-round".

Collingwood are yet to lock in Tom Langdon with work remaining before they sign the 24-year-old however their interest in Bulldogs' defender Marcus Adams is lukewarm at best with Darcy Moore expected to re-sign.