The Boston Celtics have taken advantage of quiet games from Australian duo Thon Maker and Matthew Dellavedova to beat the Milwaukee Bucks 92-87 and take a 3-2 lead in their NBA playoffs first round series. 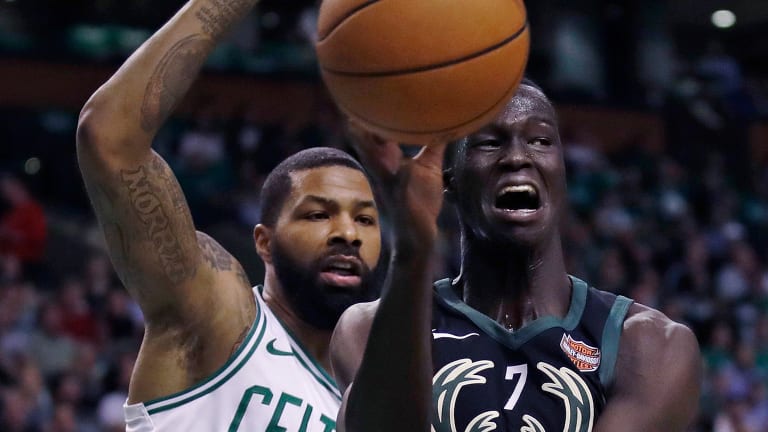 Locked down: Thon Maker is guarded by Marcus Morris.

The Celtics shifted their Australian big man Aron Baynes from the starting lineup to the bench in Tuesday's game in Boston in favour of the more athletic Semi Ojeleye.

They thrived in front of their raucous home crowd, also buoyed by the return of guard Marcus Smart after he sat out with a thumb injury since March 11.

The Celtics can now eliminate the Bucks from the playoffs in Thursday's game six in Milwaukee.

However, they lost the last two games played in Milwaukee.

"We have to execute in a hostile environment," said Smart, who had nine points, five rebounds and made key aggressive plays including fighting for a loose ball and passing it for a basket in the final quarter.

Maker, after stunning games in the past two wins in Milwaukee, had just two points, no blocks and fouled out in the final seconds.

Dellavedova was scoreless after only taking two misguided three point attempts and struggled with the Celtics' guards pressuring the full court when he had the ball.

The Celtics' Al Horford had 22 points and 14 rebounds while Baynes was also quiet with four points and two rebounds.

The Bucks' Giannis Antetokounmpo was not at his usual dynamic best with 16 points and 10 rebounds.