South Africa hold high hopes of a rare double over New Zealand as this year’s Rugby Championship comes to a close on Saturday, but they will be wary of being subjected to a ferocious backlash from the world champions.

New Zealand have already retained their Rugby Championship title, but blotted their copybook last month when the Springboks pulled off a surprise 36-34 win in Wellington. 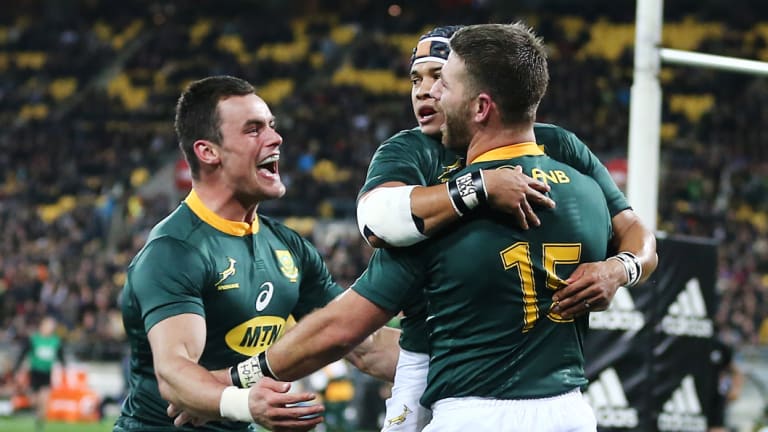 Second dose: The Springboks impressed in their last clash with New Zealand in Wellington.Credit:www.photosport.nz

South Africa will now hope to use their home advantage as a springboard for a second straight victory against the All Blacks, a feat last achieved in 2009 and rarely inflicted on the all-conquering New Zealanders.

"There’s an edge about this match-up," All Blacks coach Steve Hansen said. “They beat us in the last game and that’s why there’s an edge now that probably hasn’t been there for a while.”

Loftus Versfeld sold out weeks ago and the thin Highveld air is always a factor in South Africa’s favour at the ground.

Yet the hosts have lost their previous four Tests against the Kiwis at the Pretoria venue, by an average margin of 20 points and with 19 tries conceded.

A sterling defensive performance was the catalyst for the Wellington win as well as last week’s 23-12 success for the Boks over Australia, but their attack needs polishing if they are to secure another victory.

“The All Blacks usually hit hard back after a loss so we have to be mentally and physically ready for a massive contest," said Springboks coach Rassie Erasmus.

"We will have to front up in defence and be clinical when we create chances because the All Blacks punish you for errors and missed opportunities."

New Zealand have picked their strongest available side for the Test with captain Kieran Read returning after sitting out last week’s trip to Argentina.

Prop Owen Franks and scrumhalf Aaron Smith are also restored to the line-up and Jack Goodhue has been picked ahead of Ryan Crotty, who could be a devastating option off the bench.

"This team hasn’t had a lot of adversity chucked in its face. Individually or as a group. So it’s something we have to learn from," added Hansen. 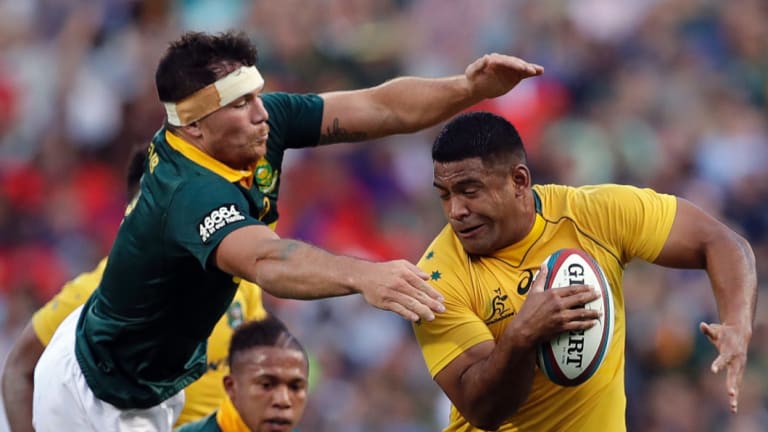 Recall: South Africa’s Francois Louw (left) is back in the Sprinboks’ line-up.Credit:AP

South Africa have drafted number eight Francois Louw back into the team after an emergency call-up as one of three changes to their side.

Louw, 33, had gone back to play for Bath in the English Premiership after featuring for the Springboks in their opening four matches of this year’s Rugby Championship.

Yet he was recalled for the last game of the competition against the world champions after Warren Whiteley suffered a training-ground injury.

He played for Bath last Saturday and then flew out to rejoin the Bok squad.

Sikhumbuzo Notshe started at number eight in last week’s win over Australia but has been dropped to make way for Louw, whose experience is preferred in order to counter the returning Read.

Erasmus again preferred Steven Kitshoff to veteran Tendai Mtawarira at loosehead, as he did last month when South Africa upset the All Blacks in Wellington.

Mtawarira started last week against Australia in Port Elizabeth with Kitshoff replacing him in the second half.

Damian de Allende has overcome a shoulder injury and returns to centre in place of Andre Esterhuizen.