Reed Mahoney was not long ago labelled a ''cheeky little prick''  by Sam Burgess.

And in just his seventh NRL game, the rookie Parramatta hooker Reed Mahoney could not guarantee he would bite his tongue when lining up against future Immortal Cameron Smith. 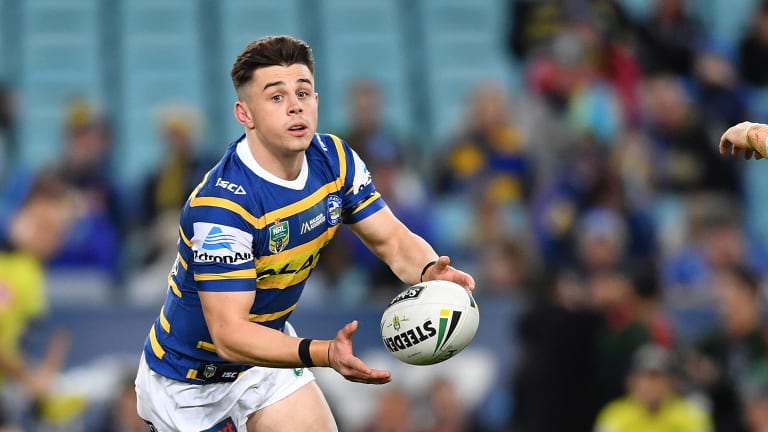 Hooking in: Injuries have opened the door for Reed Mahoney to shine.

Mahoney, 20, said he was far from overawed by the challenge in Melbourne of stopping the game's best at such an early stage of his career.

"I don't mind having a little yarn on the field with some of the boys, but it won't work with him [Smith],'' Mahoney told Fairfax Media.

"I'll just go out and do my job. If some words come up I might say something.

"We've got things in place to try and keep him quiet, but he'll come out and definitely test us through the middle.

"He's so composed and knows when to pull the trigger, when to calm things down. He's done it all in the big moments in grand finals and State of Origins.''

Mahoney crossed paths with Smith last month when he featured in the Maroons' Origin win over NSW in the under-20s curtain-raiser at Suncorp Stadium before the man of the moment was given a rock-star reception before kick-off.

The youngster quipped his father Glenn, a passionate New South Welshman, wished him luck before that Origin game, ''but I still hope NSW win''.

Parramatta coach Brad Arthur turned to Mahoney to start at dummy-half after injuries to Kaysa Pritchard and Cameron King.

Just as he made the most of his opportunities through the summer when he landed the chance to join the full-time squad, Mahoney has made the No.9 his own.

"He's one of those feel-good stories in terms of blokes looking for opportunity, he had a train-and-trial before Christmas, he knuckled down and worked hard until an opportunity became available,'' Arthur said.

"He's a good kid, he's got that swagger about him, and we don't want to knock that confidence out of him, but we also want to make sure he stays grounded.

"He's got a really good pass, he gives our halves that ability to hold good width, and he's a competitor – he competes for everything.

"Reed is also brave and gets in front of them, he makes his tackles and that's all he needs to do.''

Mahoney said he rushed his game when he first started, which he quickly addressed after some words from halfback Mitch Moses.

After playing in Canterbury's SG Ball team, Mahoney was picked up by arch rivals Parramatta, where he is contracted until the end of next season.