Wallabies scrum supremo Taniela Tupou has mounted a seemingly irresistible case to start in Australia’s next match against the Pumas after a brilliant cameo off the bench in Brisbane but there is no guarantee Michael Cheika will elevate the prodigious youngster just yet.

With the Wallabies camped on their own line, under a mountain of pressure from a South African pack hell-bent on asserting dominance in the dying stages of a gripping match, Australian captain Michael Hooper approached Tupou. 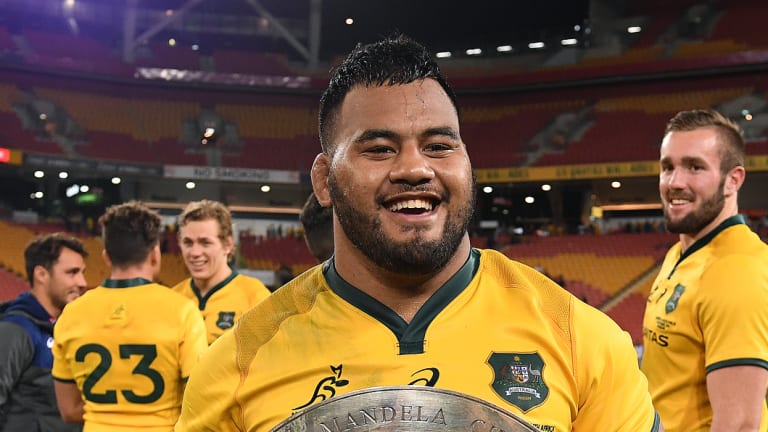 Taniela Tupou holds the Mandela Plate after the Wallabies’ win.

Even though Tupou had hurt his neck in an earlier scrum, Hooper needed something big from his replacement prop.

“He said: ‘Nella, I really need this from you’,” Tupou said. “I looked straight at him and said: ‘I’ll give it to you’. “Before that scrum I told myself I have to put my life on that scrum. If they get a penalty they pretty much win the game. I went in there with everything I had and it was a good scrum.”

After a solid scrum from both sides, a few phases later the Wallabies managed to turn the ball over before Will Genia booted it into the stands at Suncorp Stadium to clinch a pressure-relieving 23-18 victory.

Interestingly, it was the same scoreline as the Brisbane fixture in October last year against the All Blacks and in both matches the Wallabies trailed by a point at half-time.

It was also the third time in five matches between the two sides Australia have scored exactly 23 points.

Tupou helped the Wallabies win a crucial scrum penalty in the 68th minute in Springboks territory, which resulted in a Matt Toomua penalty that put the home side up by five points.

The fact Tupou got one over South African beast Tendai Mtawarira was the most impressive aspect.

“After the first scrum against him I was like, I can challenge him,” Tupou said. “I think I did alright against him. I’m a lot better at scrummaging now and I enjoy it because I’m challenging some of the best props in the world. I’m not going to say I am one of them but I think I have done the work to be able to challenge them." 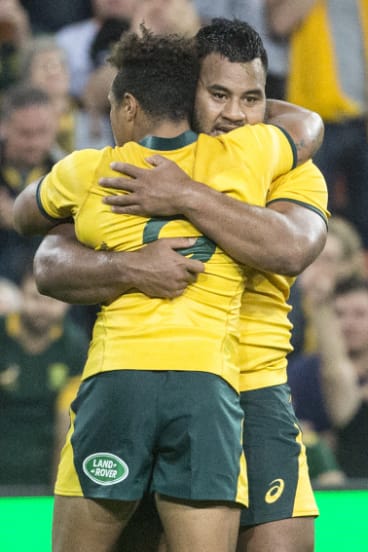 Will Genia and Tupou embrace after the final whistle.

There is no denying the 22-year-old they call “Tongan Thor” has a huge future in international rugby and the man himself says he would relish the chance to start against the Pumas on the Gold Coast if selected.

“If they start me or put me on the bench I think I’m up for it and ready to take it,” Tupou said. “If Cheika said: 'Nella, you’re starting next week,' I’d be taking that with both hands and make sure I’m doing my job. I’ll keep working hard and hopefully get the chance to start some time soon.”

Cheika praised Tupou for his performance off the bench but did say there were a couple of technical adjustments he could make that would also come with experience.

As for whether Tupou might start ahead of Allan Alaalatoa in Australia’s fourth Rugby Championship match, Cheika does not seem completely sold on the idea, for now.

“It’s horses for courses with all these things, you see how they go,” Cheika said. “We’ve got to remember he’s got five caps. No hurry, no panic. Let him grow as a footballer. Playing the back-end of the game as a front-rower is big. He’s playing nearly a half a game of footy anyway.”

Captain Michael Hooper added: “He pushes to get better every day at training. That’s the best thing at the moment. He’s hungry to become a better player."

Tupou said it was nice to be in a happy Wallabies change room after deflating losses to Ireland and New Zealand this year.

“It’s a different feeling because the last week has been tough for us and to be able to win this game, we needed that,” Tupou said. “It’ll be good for us going forward. Argentina next weekend; [we just have to] just bring the same kind of mindset.”