English football royalty Chelsea FC started life under new coach Maurizio Sarri on a winning note, with a 1-0 victory over Perth Glory in front of 55,522 fans at Optus Stadium on Monday night.

The crowd was an all-time record for the A-League side but just short of the new $1.8 billion venue's own benchmark set in May, when 57,616 fans attended the AFL clash between West Coast and Richmond.

It didn't take long for the glamour English Premier League club to find form in its first pre-season match, with Pedro hitting the back of the net in just the fifth minute. 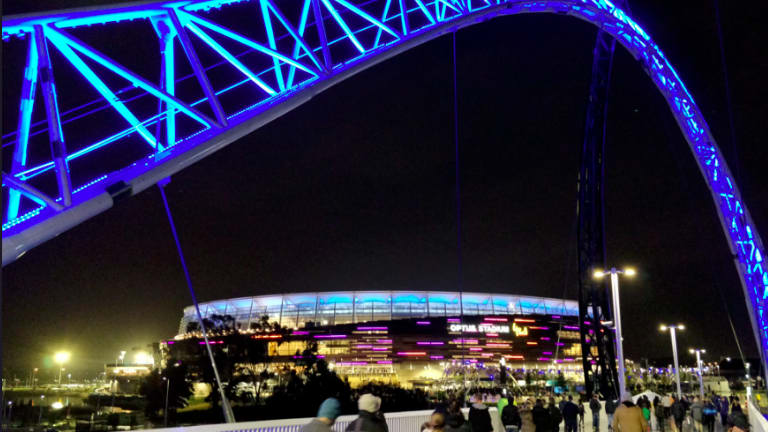 But Glory fans should be happy with how their players responded thereafter in their first serious hitout under new coach Tony Popovic, holding the 2018 FA Cup champions well, thanks in no part to a series of sharp saves from goalkeeper Liam Reddy.

Perth threatened to snatch an equaliser late after Popovic brought on star striker Diego Castro, Jason Davidson, Juande, and Brendon Santalab but, in the end, had to settle for a respectable loss in a stunning showpiece for WA soccer fans, just weeks after the World Cup in Russia.

However, it was 17-year-old striker Callum Hudson-Odoi who stole the limelight just minutes after kick-off, with his fancy footwork and neat cross setting up Pedro's opener.

Glory endured a host of nervy moments during the remainder of the first half but managed to keep their star-studded opponents at bay.

New Perth recruit Fabio Ferreira caused Chelsea headaches with some piercing runs early in the second half, as goalkeeper Reddy kept Glory in the game with some superb saves.

Pedro watched a series of chances go begging, as did many of his teammates, with both Mario Pasalic and Ross Barkley hitting the goalpost.

Glory found their attacking mojo late in the game but, like the Socceroos in Russia, couldn't finish off their chances in front of goal.