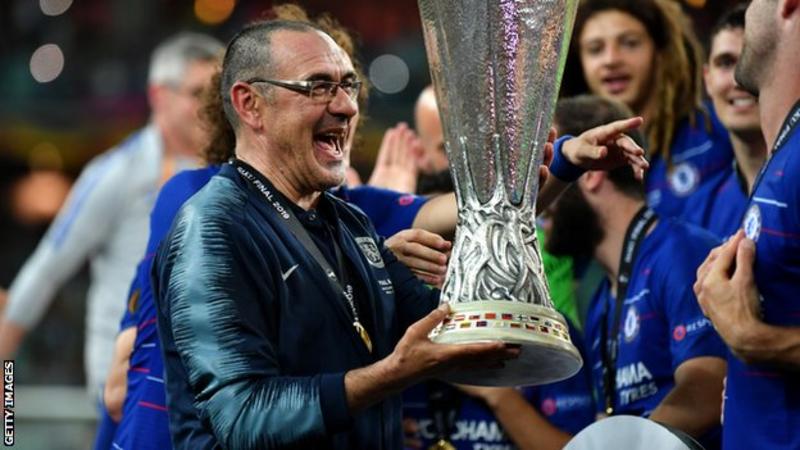 The entrance to the Chelsea manager’s office might as well be a revolving door.

Following the departure of Maurizio Sarri to Juventus, the club are looking for their 12th different manager under the ownership of Roman Abramovich.

Three of the previous 11 were temporary, including Guus Hiddink, who was at Chelsea for just 27 games but still had time to make an impact.

Since 2004, Chelsea have endured only one season that could be termed a complete write-off, when they failed to win, or finish second, in a major domestic competition or reach the last four in Europe. Only five times in that period have they finished a campaign empty-handed.

Against that backdrop, it is reasonable to ask what do Chelsea want – and, more importantly, is there anyone who can actually give it to them?

Who could Chelsea turn to?

For all the difficulties Chelsea managers tend to encounter, there will be no shortage of candidates linked to the vacancy.

The most obvious is record goalscorer Frank Lampard, who is in charge of Derby County.

Lampard ended his first season as a manager with defeat by Aston Villa in the Championship play-off final. The 40-year-old says he expects to stay at Derby but has also said he will speak to owner Mel Morris about his plans.

Lampard is steeped in Chelsea history, won 11 major trophies during his 13 years at the club, and is adored by supporters, even though he eventually moved to join Manchester City before ending his career in Major League Soccer with New York City. 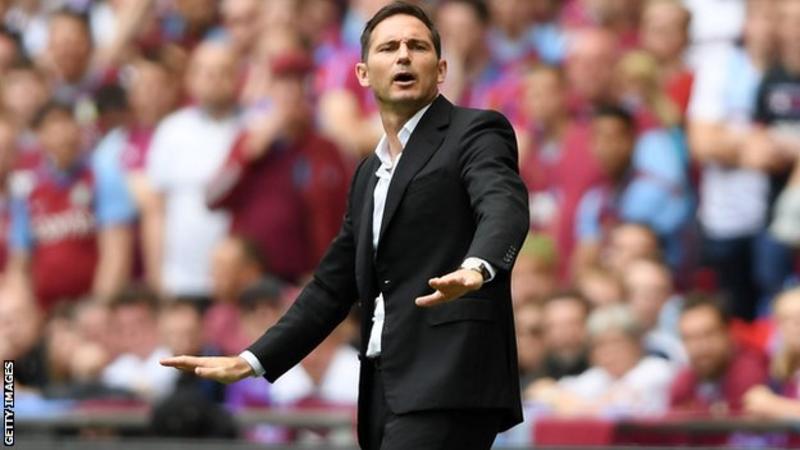 At Derby, Lampard also linked up with former team-mate Jody Morris, who developed an impressive reputation during five years working with Chelsea’s youth teams. That might improve the pair’s chances of taking over at Stamford Bridge, given the transfer embargo the club are facing.

Given Chelsea loanees Fikayo Tomori, Mason Mount and Tammy Abraham were all involved at Wembley and others, such as Reece James, have also impressed in season-long moves, Morris’ inside knowledge would be a major asset in deciding which of these youngsters have the capability to step into the first-team picture.

Lampard would be a huge departure for Chelsea, though. They have not appointed an English manager since Glenn Hoddle in 1993 when John Major, a lifelong fan, was prime minister.

Nice boss Patrick Vieira has more experience. Prior to his return to France he was in charge at New York City after a spell working as Pep Guardiola’s reserve-team manager at Manchester City, but his London links are to Arsenal.

Massimiliano Allegri is available after leaving Juventus but said on Thursday he intends to take a year out. Former France and Paris St-Germain coach Laurent Blanc may also be spoken about – but he has been out of the game for three years.

Wolves manager Nuno Espirito Santo is also of interest. Nuno has taken Wolves from the Championship to seventh in the Premier League – and European qualification – in the space of two seasons. He is known to be hugely ambitious and for all the promise Wolves have shown during his time at Molineux, Chelsea represents a significant step up.

How will the transfer embargo impact the recruitment of a new manager?

Even if Chelsea are prevented from signing players until the summer of 2020, there would still be one significant new arrival for a new manager to work with – Christian Pulisic, at £58m the club’s third most-expensive signing.

Given “big-six” rivals Tottenham, Arsenal and Manchester United did not sign anyone for a similar sum during 2018-19, having to “make do” with that one transfer is not a hardship for Chelsea, especially as there are so many younger players to come through.

The issue – if there is one – is having to work with someone else’s squad.

Sarri might think N’Golo Kante playing wide and Jorginho in central midfield is an excellent combination, but plenty disagree. If Kante is moved to a more defensive role, Jorginho is of little value. Add the departure of star man Eden Hazard to that and suddenly a Chelsea side that scraped into the top four is significantly weakened.

This being Chelsea, while a manager might be appointed with the idea of retaining faith beyond the point at which players can be bought again, there is no guarantee he would survive a disappointing campaign. 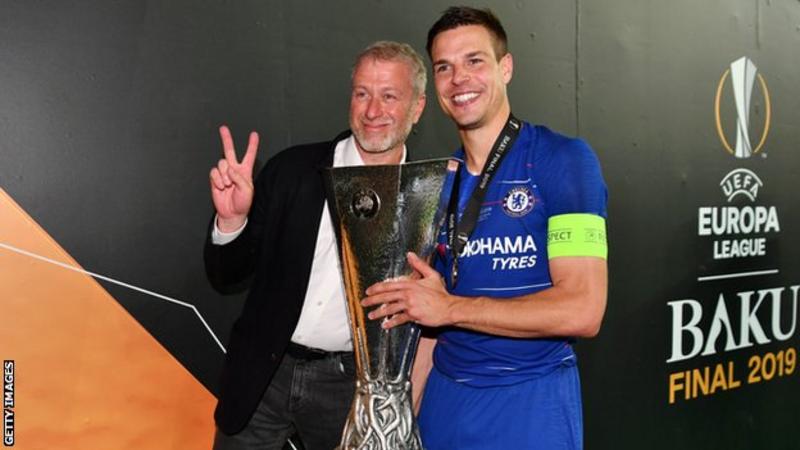 What does a Chelsea manager need to do to keep his job?

The easy answer is to keep Abramovich happy. The detail is more complex.

Sarri’s exit is the first of the Abramovich era when it could be argued a permanent manager has gone on his own terms.

His departure was convenient for Chelsea, though.

Unlike Jose Mourinho and Antonio Conte – both fans’ favourites – Sarri was disliked by Blues supporters, who did not appreciate either his tactics or team selections.

Chants of “you don’t know what you’re doing” were frequent. Their incredulity at the time it took Sarri to find homegrown youngsters Ruben Loftus-Cheek and Callum Hudson-Odoi a place in his team was deep-rooted.

Nevertheless, Sarri secured a top-three Premier League finish – something Chelsea have bettered only twice in eight seasons – won the Europa League and reached a second cup final, feats they have not managed in the same season since their Champions League-winning campaign of 2011-12.

So, without Juventus’ intervention, Abramovich would have needed to decide whether to keep a – relatively – successful manager disliked by supporters, as opposed to getting rid of one who was not doing so well but retained support in the stands.

Abramovich has seemed to scale down his lofty ambitions in recent years. While Luiz Felipe Scolari was sacked when it appeared the club might not finish in the top four in 2009, and Carlo Ancelotti was axed for not winning anything in 2011, Mourinho survived a trophyless season three years later and Conte made it to the end of the 2017-18 campaign even though Chelsea were fifth from 25 February to the end of the season.

So the chances are Sarri would have survived had he not upset the fans. As he did, Chelsea were happy to listen when Juventus came calling.

Will they look for a director of football?

One of the sub-plots to Chelsea’s Europa League final against Arsenal was a story that appeared a few days before claiming former Blues keeper Petr Cech would be returning to the club as technical director.

Tellingly, while Cech did not wish to elaborate on the story, he did not deny it. 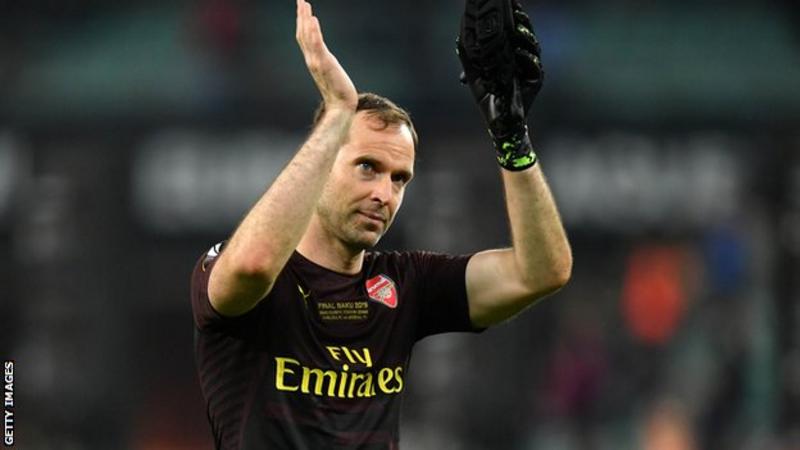 But it is hard to see how the 37-year-old, who retired as a player after Arsenal’s 4-1 defeat in Baku, can have amassed the necessary experience to fulfil a conventional technical director role.

Since Michael Emenalo’s exit in November 2017, director Marina Granovskaia has been in charge of negotiating transfers and new contracts, a situation that troubled Conte.

What the appointment of a Cech-type figure might do is create a bridge for the manager to the club’s hierarchy, thus potentially reducing the scope for conflict.

Remarkably, Chelsea have carried on winning no matter which name appears on the manager’s door.

While irritation between the man responsible for putting a team on the pitch and the people who control the finances has flared frequently, Chelsea’s chain of command has ensured the club avoided stockpiling players who fit different managerial philosophies and become surplus to requirements when a change is made.

However, it does feel a shift in outlook is coming.

Abramovich has scaled back his funding from his early years. A much-publicised – and hugely expensive – ground redevelopment is on hold. Planning permission will have to be revisited if enabling work does not commence by the end of January 2020 and, until there is clarity over that, rumours about Abramovich selling up will not go away.

Sarri’s reign ended with Chelsea claiming the 16th major honour of the Abramovich era – but they had won only eight in their entire history before the Russian bought the club in 2003.

With a transfer ban looming, are the club prepared to look longer term with their next manager?

It would potentially mean taking a step backwards, in order to secure the stability they have so often lacked.

Or are they going to carry on as they have before, believing it will carry on delivering success on the pitch?

The identity of Sarri’s successor will tell which way Abramovich has decided to go.