With disappointment etched on his face, Melbourne City midfielder Dario Vidosic could only lament that his team did not reproduce what they were capable of after taking an early lead  before crashing out to Newcastle Jets in their A-League semi-final.

Vidosic, whose telling cross from the left set up Bruno Fornaroli to get the crucial touch for the opening goal inside the first quarter-hour, said City were not able to impose themselves on their opponents in the final third in the way they had against Brisbane Roar in the elimination final, which they won comfortably a week earlier. 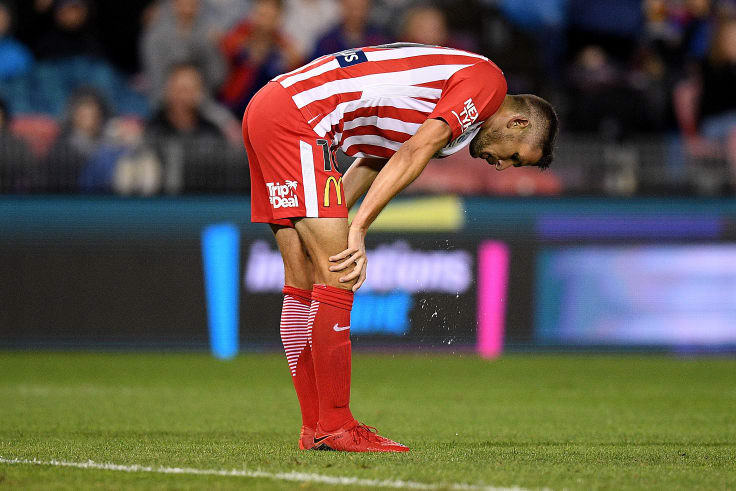 Can do better: Dario Vidosic reacts after missing a chance against the Jets.

''I don't think we played our best game tonight. We resorted a little bit to their style, a lot of long balls," Vidosic said. "We probably didn't have that bit of courage to try to play through their press, which we have been doing these last few weeks, especially against Brisbane.''

He could only rue the fact that City was undone by an extraordinary goal and a defensive error but was philosophical about the way his team's season came to an end.

''It was a bit of a freakish goal, and a bit of a mistake for the second. But that's football. We are bitterly disapppointed for the moment, but we will pick ourselves up and be ready to go next season.

''Last week we did really well, we kept a high line and kept them in their half. Tonight, for long periods, we didn't keep it in their half for long enough and create those moments for our midfielders to get in between and then be able to make runs in behind, like for the first goal.

''It's always tough after a loss, even in the regular season, but when the season comes to an end it's a bitter pill to swallow, and when freakish goals go in like that off the heel and lobs and goes into the top corner, it makes it even that little bit harder.''

Vidosic joined City in the January transfer window and has made a big impression at the club in only three months. He is contracted for next season and is looking forward to the challenge already.

''I have thoroughly enjoyed it. I will be looking to be even better next season. It was a long season, not having had a pre-season, coming off surgery pretty much two weeks before the season started. I got back on to the training field, then with what happened in Wellington, coming here, a heavier workload, the intensity of training.

''I am happy to make my contribution and for the body to hold up without any injuries. With a pre-season next year I am hoping to be even better.

''I think we have left a good starting point for next season. We played some very good football and we just need to continue now. We will have the whole pre-season to work and get ready. It's a long pre-season, which is a good thing from a coaching and team point as well. It's a long time to really work on the style.''

He felt that the loss through injury of defensive stalwart Michael Jakobsen might have made a difference.

''Possibly, he is our captain and leader. But I think Ossie [Osama Malik] was brilliant there filling in. He made one bit of an error [losing control of the ball to set up Jason Hoffman for the Jets winner].

''The touch came off, but normally we play out from that and it's something we try to do. It's nothing on Oz, those things happen. It was just one of those that happened for Newcastle.''