Five days after an engrossing game of football and its fascinating fall-out Alastair Clarkson and John Longmire finally patched up their differences. But it took a lengthy, frank and robust telephone conversation on Wednesday night to put one of the AFL’s great friendships back on its regular terms.

To put it bluntly, the Swans were disgusted with Clarkson’s behaviour after Hawthorn’s narrow loss to Sydney last Friday night. The revered and influential coach said after the game that Longmire’s defenders had got away with ‘‘blue murder’’ and he broke the unwritten post-game rule of singling out a player — Dane Rampe. 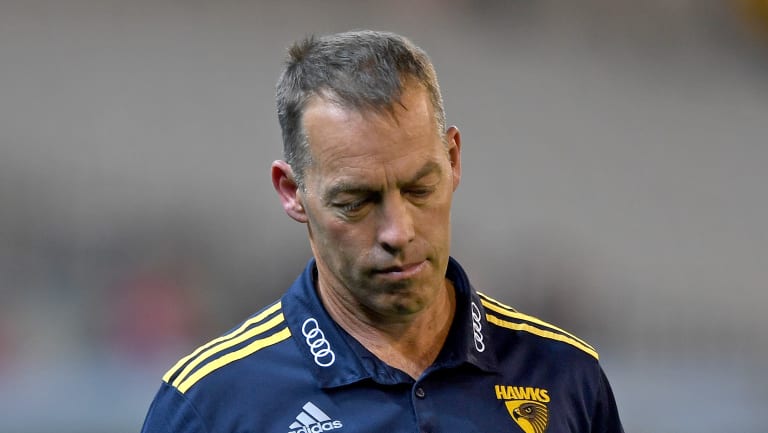 Hawthorn coach Alastair Clarkson has had a busy week after some fiery comments.

Being Clarkson, he got away with this subtle swipe at the umpires and then the following day he expanded in an extraordinary interview on 3AW linking the patterns and tactics from the previous night to his fears for the future of the game.

On Sunday night Clarkson made a Monday morning breakfast date with AFL chief Gillon McLachlan,  where he pursued his distaste for the blocking tactic he clearly believed cost his club. Not only Sydney but reigning premiers Richmond were in his sights as he produced visual evidence on his mobile device over coffee at Prahran’s Club Social. That was the final straw for the Swans, who did not miss the implications of the apparently coincidental memo from head office which landed at their desk on Tuesday underlining warnings regarding defensive blocking.

Sydney executive Tom Harley contacted the AFL’s football boss Steve Hocking, making his displeasure clear and stressing his concern that such strategically timed meetings and public targeting of tactics would not create a precedent. The Swans' view was that Clarkson’s behaviour was petulant, hypocritical and unsportsmanlike and that he was indulged by the game’s governors. This was a view shared closer to home and even among the Hawthorn fraternity, concerned that their coach remains insufficiently handled or reined in at time when he chooses to display poor sportsmanship.

Longmire spoke with McLachlan and voiced his disappointment that the league CEO was not available for the occasional coffee or breakfast in the Swans’ home town. This is a view shared by most of the non-Victorian coaches. Certainly those at the NSW and Queensland clubs speak of an isolation from the game’s coal face impossible to understand unless you’ve experienced it.

This was not the first serious dispute between Longmire and Clarkson and it won’t be the last. Clearly their deep and historic relationship will continue to override the stoushes involving the stubborn and often bellicose four-time premiership coach and his equally stubborn and proud former teammate, now coaching his eighth season at Sydney and having never once finished lower than sixth on the ladder.

But the row is symptomatic of the growing emotional divide between the Victorian clubs and the rest, coming as it did so soon after the historic AFL deal with the Victorian government and the MCC which has guaranteed an MCG grand final for more than four decades. The deal has been applauded by every club but there is a strong view that more must be done to make the competition fairer for travelling grand final teams.

It was the Swans CEO Andrew Ireland who first put forward the best-of-three concept for the grand final in the interests of fairness and Sydney have strong thoughts about other potential measures to create a level September playing field. Nor will they abandon the best-of-three concept. This millennium has seen its fair share of non-Victorian premierships but only two (the Brisbane Lions in 2001 and Sydney in 2012) have involved victories against Victorian teams.

Then came the meeting of the Victorian presidential bloc of seven convened by Jeff Kennett and pushed by Eddie McGuire and Peter Gordon, which insulted the interstate club chairmen — who were not invited – and angered the AFL.

AFL Commission chairman Richard Goyder, who did take the trouble to sit down with the majority of non-Victorian coaches in their club offices last year, conveyed his disappointment to all the non-Victorian presidents, and Kennett and co. were warned that such behaviour could stop future meetings with the commission all together.

This highly sensitive divide between Victoria and the rest was not helped by Mike Fitzpatrick’s extraordinary interview on Fox Footy’s Open Mike this week. Certainly not for relationships between head office and Sydney. Not only did the former AFL chairman come across as aloof and at times uncaring regarding deeply sensitive issues but he displayed an embarrassing lack of knowledge in terms of league rules and the game’s recent history.

Defending his position on the Lance Franklin deal, Fitzpatrick pointed the finger at the Swans, saying their contentious cost-of-living allowance was designated for the younger, lower-paid players when in fact it was legislated to apply pro rata across the entire Sydney – and Greater Western Sydney — playing lists. It was disappointing to hear a commission chairman fumble with the rules.

Fitzpatrick’s stated disappointment that the commission’s response to the Adam Goodes booing was not regarded as strong enough by the public was pretty feeble as well given the traumatic nature of that disgraceful saga.

His successor Goyder, a recently departed Fremantle board member when that club was dealt a series of practical disadvantages in 2013, appears more sensitive to the non-Victorian woes and more highly sensitive to the grievances of those clubs.

The fact that Victoria remains the game’s heartland — despite head office’s neglect in recent decades of regional football — and headquarters will not change. But the recent expansion into the non-traditional states and the AFL’s failure until recently, according to those northern clubs, to adequately promote and imaginatively fixture their games has only enhanced their disenchantment.

It took five days for the chest-beating Clarkson to make his peace with his old friend the ''Horse'' but resolving the growing schism between the Victorian clubs and the rest with their unique and individual points of difference calls for stronger handling.

And the occasional cup of coffee or breakfast generated by McLachlan, Hocking or Goyder in Sydney, Brisbane or the Gold Coast would mean more and prove more significant than the AFL bosses perhaps understand.