He's campaigned hard on social media, spent $1300 on tickets and will donate half his trainers fee to charity. He's even come up with his own hashtag.

Now Queanbeyan trainer Joe Cleary's fate is in the "lap of the slot holders" to see if he makes the inaugural field for the $1.3 million Kosciuszko (1200 metres) at Randwick on October 13.

The innovative race allows punters to buy $5 tickets and 12 winners will be drawn on Friday at 4pm. 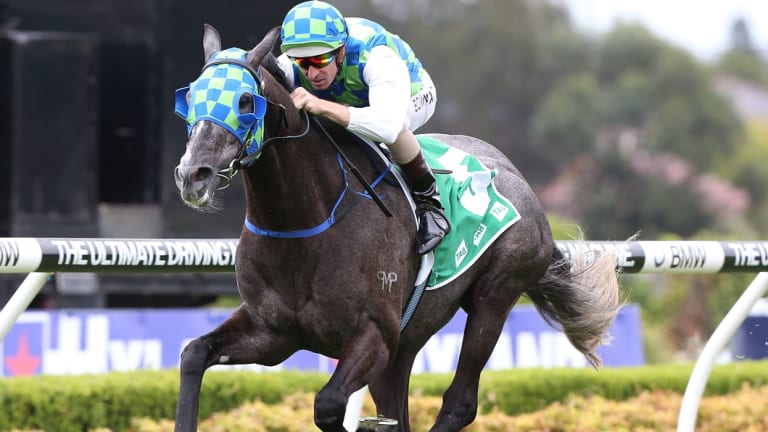 Joe Cleary hopes someone will #givethegreyago in the $1.3 million Kosciuszko.

They can then pick which horse they want to represent them in the lucrative race for country NSW trainers.

Cleary's hoping his Coolring will be one of the 12 picked to run in four weeks and he coined #givethegreyago on social media to help his cause.

The eight-year-old gelding has accumulated more than $627,000 in prizemoney.

"Looking forward to the next 24 hours to see if we gain a slot. We've campaigned pretty hard on social media," Cleary said.

"We've put it out there that he's available and we've put a nice little package together for the potential slot holder.

"He's a stakes winner, he's won at Randwick, he's won over $600,000 in prizemoney so he basically ticks all the boxes to be in this race.

Coolring's a $26 chance for The Kosciuszko, with Matthew Dunn's Care To Think the $3 favourite.

Cleary said unlike some of the candidates, his son of Sebring will be aimed to peak in the middle of October.

His last run was in the listed Glasshouse Handicap (1400m) on the Sunshine Coast on June 30, but he had a gallop at the Queanbeyan races on Monday.

"He's a tough sprinter. You've got your two or three at the top – The Monstar ($8), Care To Think and Victorem ($6) – and you take those three horses out of the equation and it's a very open race," Cleary said.

"I think there's a lot of horses that have peaked too early – the race is still a month away and these horses are peaking already.

"I just think there's a couple of horses that have really been aimed at it, including Victorem, Care To Think and also Coolring."

If Coolring gets a run, it will also be a boost for the community with Cleary pledging half of his earnings will go to the Ricky Stuart Foundation, which raises money and awareness for autism.

The foundation has already built two respite homes in Canberra and will announce their next project in the coming months.

"I'll be donating half of my trainers percentage, which could be up above $30,000, to the Ricky Stuart Foundation," Cleary said.

The Joseph Ible-trained Maryore is a $51-longshot in the Tibbie Stakes (1400m) and the Joseph, Jones and Jones-trained Almost Court will jump in the Cameron Handicap (1500m) as an $81 hope.