ARLINGTON, Tex. — With its veteran defense complementing its true freshman quarterback, second-ranked Clemson dominated third-ranked Notre Dame, 30-3, on Saturday in the Cotton Bowl, a College Football Playoff semifinal, to advance to its third national title game in four seasons and solidify its status as an elite program.

The Tigers will face the winner of Saturday’s other semifinal, the Orange Bowl between No. 1 Alabama (13-0) and No. 4 Oklahoma (12-1), in the national championship game on Jan. 7.

Should Alabama win, Clemson (14-0) and Alabama will meet in the title game for the third time in the past four seasons, with each team having won one so far. (The two also met in a semifinal last season, a game Alabama won.) 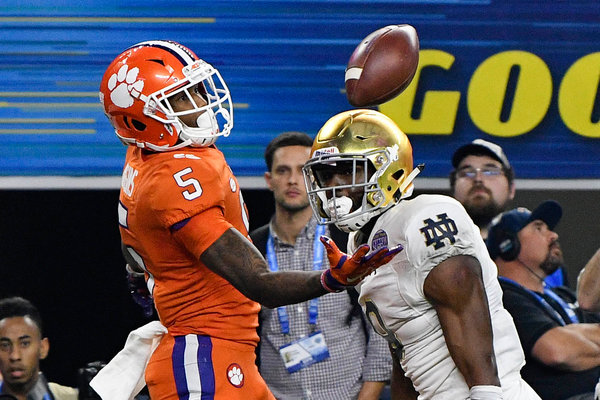 The thorough manner in which Clemson dominated the Fighting Irish will offer ammunition to those who thought that Notre Dame (12-1) had been graded on something of a favorable curve by the playoff selection committee.

Because Notre Dame is the only major team not in a conference, the strength of its schedule varies from year to year. This season’s squad faced one major test, defeating Michigan at home in September, but had a relatively light schedule over all.

But Clemson was so dominant this season — its average scoring margin of 30.9 entering Saturday’s game was second only to Alabama’s — and so impressive on Saturday that it might be just as easy to argue that virtually no team could have looked better versus Clemson.

Clemson’s experienced defensive line bottled up Dexter Williams, Notre Dame’s senior running back, who finished with just 54 yards on 16 carries. The Tigers’ secondary harried the Irish receivers, and quarterback Ian Book was 17-for-34 passing with 160 yards, no touchdowns and one interception. He also lost a fumble on a strip sack by the redshirt junior lineman Clelin Ferrell that led to the game’s first points, a Clemson field goal midway through the first quarter.

Clemson’s defense was without the star tackle Dexter Lawrence, one of three Tigers suspended after testing positive for a banned substance called ostarine. Lawrence has denied intentionally taking ostarine, and Clemson is appealing an N.C.A.A. ruling that would keep him out of the championship game.

Still, the dominance of Clemson’s defense, ranked fourth in the country, was expected. By contrast, quarterback Trevor Lawrence, the true freshman who beat out the previous Clemson starter, Kelly Bryant, for the job early in the season, was outstanding in this high-pressure game.

Lawrence, finished 27-for-39 passing with 327 yards, three touchdowns and no interceptions.

He busted the game open early in the second quarter, when, after Notre Dame failed to convert a fourth-and-4 in Clemson territory, he hit Justyn Ross, a speedy freshman receiver, down the right sideline for a 52-yard touchdown.

A few drives later, Lawrence threw a perfect pass to Ross, this time on a seam route, for a 42-yard touchdown. Ross had 137 receiving yards in the first half.

The drive that turned Clemson’s halftime lead from just imposing to effectively insurmountable began with 48 seconds left in the half. On third down, Lawrence hit the sophomore Amari Rodgers in the right flat for a first down deep in Clemson’s own territory, and Rodgers shed an attempted tackle, running out of bounds and stopping the clock.

Then Lawrence found the senior receiver Hunter Renfrow — a former walk-on and the hero of the 2017 national title game — in the middle of the field for 32 yards. That play, plus a roughing-the-passer penalty, suddenly put Clemson on Notre Dame’s 19-yard line with nine seconds left and, thanks to Rodgers, a timeout to regroup. On the next play, Lawrence flung a pass to the sophomore Tee Higgins, who bobbled the ball and caught it with just his right hand as he fell out the back of the end zone, making it 23-3.

There were other demoralizations for the Irish. Notre Dame’s Cole Kmet stripped Clemson’s Derion Kendrick on a first-quarter kick return, and the Irish recovered — but not before, according to replay review, the ball’s oblong tip grazed the sideline boundary, giving Clemson possession. A second-half interception by Notre Dame’s Asmar Bilal was also overturned on review.

Later in the third quarter, Clemson’s Nolan Turner picked off a Book pass, setting up a 62-yard touchdown run by Travis Etienne, the Tigers running back who finished with 109 yards on the ground.

If the Notre Dame fans, who seemed to outnumber the Clemson contingent, could find any consolation at that point, it was this: Pretty soon, there would be only one more quarter left.