Melbourne expect to take Tom McDonald to Alice Springs for Sunday's clash against the Adelaide Crows despite the key forward battling soreness in his troublesome foot.

McDonald left training early on Thursday on a golf cart, having pulled up sore, and was sent for scans. He had missed the opening five rounds of the season because of the foot problem. 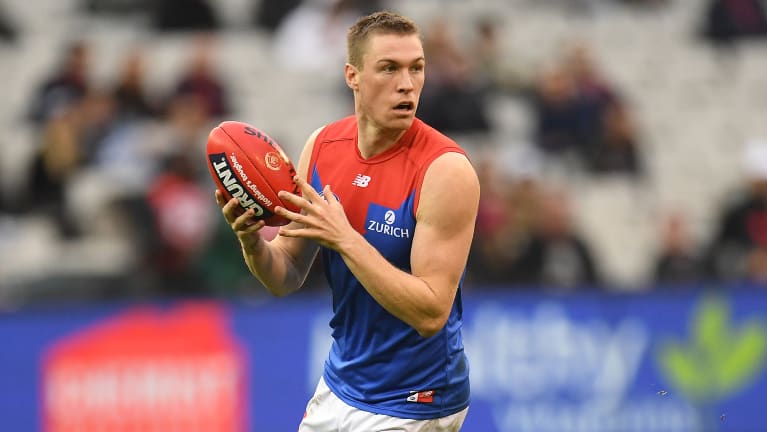 Coach Simon Goodwin said McDonald was sore after last week's 109-point win over Carlton but was still hopeful he would line up against the Crows.

"He is still coming back from his foot, obviously. It's more precautionary – take him off the track. We are pretty confident that we still have some training ahead, he will be right to play as it stands today. But we certainly won't be taking a risk with Tom," he said.

"He is still working his way back. We have been monitoring his loads. He was still a bit sore from the game at the weekend but, in saying that, we are comfortable it might settle down as well. He didn't have to do the full session. We will certainly take a cautious approach but, as it stands today, he will play."

Goodwin said a final call would be made after a training session in Alice Springs on Saturday.

"We will be cautious with it. Of course, it's worrying because you have got a player that is in really good form that hasn't trained. But, as it stands right now, he is confident that in his own mind, with a couple of more days and training on Saturday, that he will be right to go," he said.

"So, we will just wait and see over the next couple of days. He will jump on the plane and travel up."

McDonald's absence would be a major blow but the Demons would still boast a strong attack should he be absent.

They head into this clash as an offensive force, leading the league for scoring, inside 50s and marks inside 50s. They have averaged 129 points per game over their past four games, at a time when many teams regularly struggle to score more than 60 points.

While the Demons have won their past four matches and shape as a top-four contender, questions will remain until they defeat a league heavyweight.

They have six wins this season – against Brisbane (17th) and North Melbourne (seventh) in rounds two and three and against Essendon (14th), St Kilda (16th), Gold Coast (15th) and Carlton (18th) over the past month. The opportunity to make a statement comes against the Crows, although Goodwin stressed his club respected all opponents equally.

"We respect the game and we respect the opposition. We are playing a really strong footy club this week and all we can do is look at what is right in front of us right now and that's the Adelaide footy club," he said.

Jack Viney had a subdued return against the Blues, having 12 touches in his first senior match of the season – his pre-season ruined by a persistent foot problem. Goodwin said the co-captain would be better for the run.

"He pulled up great. It was great to get the captain out there again. He gave us a lot of pressure around the contest and great leadership on field. Once again, he is working his way back. We played him 70 per cent of game time last week and we will continue to monitor that over the next month," he said.

Jake Lever, who enjoyed his best game of the season against Carlton, has said he has been looking forward to facing his former side for the first time since his tumultuous departure last year. While the word from Adelaide has been that Lever can expect anything from a fiery reception to the silent treatment, Goodwin said his rebounding defender was focused on the task at hand.

"Obviously, when a player is playing against his old club, it can be challenging for them individually but it certainly doesn't distract us from what we are trying to do – that's to go up there and play a great style of footy against a really strong footy club. For Jake, it's about playing his game, keeping those emotions in check and playing his role for the team and not really getting away from that," he said.

What the Demons will hope to do is improve their record at Traegar Park, where they have just the one win, against Gold Coast last season, from four "home" matches. The Crows have yet to play in Alice Springs.