Ash Brazill's favourite sport? It depends when you're asking. The multi-talented Magpie is alternately a netball midcourter with four Diamonds caps and an AFLW defender selected in this year's All-Australian side.

"At the moment, I'd say netball, because we're winning!" laughs Brazill, happy again playing her more established sport after a miserable 2018 for the underperforming Pies. "It's really hard; they're just so different, but so similar." 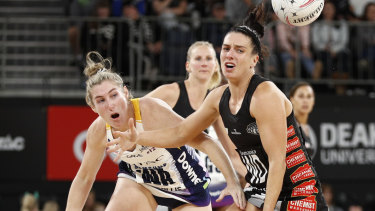 Yet it may not be the sports themselves that determine the enjoyment factor, so much as the chemistry among the personnel within. A new coaching staff and a half-new list has combined to produce a win and a draw for Magpies Netball ahead of Sunday's game against the winless Giants in Sydney, but also far more than that.

"If you'd asked me at the end of last year it was 100 per cent footy, because our [netball] season was just terrible, and we wanted it to end," Brazill says of a Super Netball stinker in which the Pies finished above only the winless Adelaide Thunderbirds. "But I love this team, my teammates."

The netballers are an older group, closer to the married 29-year-old Brazill's current self. Then again, the footballers "are all about 18, which is nice as well, because I feel young when I'm with them".

Except, perhaps, when she's feeling like the resident grandma who is determined to pass along some of the behaviours and professionalism that netball simply expects.

"But, in saying that, my footy girls crack me up," Brazill says. "They're so raw and energetic, and I'm like, 'Oh, I wish netball had a little bit of that, as well'."

Super Netball is a serious, big-money business these days, though, and Brazill is thriving in the environment created by head coach Rob Wright. Described as both "the best coach in the world" and marvellously "quirky" by his athletic wing-defence, one suspects he would be happy with both titles.

The cultural change the former Swift has driven means that, for Brazill, comparing the past and present at the Holden Centre is too difficult. Which is a good thing, she quips, because then you forget about what it was really like in the past two years. 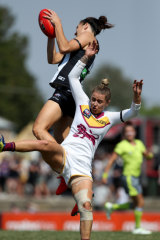 Collingwood’s Ash Brazill flies for a mark in the 2019 AFLW season.Credit:AAP

"I think the biggest thing is that before we just had days where we had to go out to breakfast or do things together, which was fun, but they were forced. This year we don't have anything like that and I reckon we've gone out more than we ever have before, for breakfasts, or to movies. We actually want to hang out with each other because it's not forced."

Netball-wise, the shattering loss of co-captain Madi Browne to an ACL injury means the four-star midcourt is down to a still imposing trio of Brazill, Kelsey Browne and Kim Ravaillion. In a World Cup year, the latter two are squad members, but Brazill is ever hopeful, despite extended time in a non-squad wilderness that has bewildered so many.

But, well, hope floats, as they say. "I've always told [Diamonds coach Lisa Alexander] that every year I'm gonna make it super-hard for her not to pick me and hopefully it's even harder this year," Brazill says.

"I feel like I'm still that young kid playing netball. A lot of athletes talk about when you're playing at the top that your goals kind of change, but I just love sport, and I love that I'm playing Suncorp and I'm playing netball, but in the end your goal is still to play for the best team in the world and if that's to play for Australia, then it's obviously there."

A first domestic championship is another ambition, one she considers achievable.

Otherwise, Brazill was most recently in the headlines in the wake of the Israel Folau controversy, when the first openly gay netballer was asked by The Saturday Paper for her thoughts on what was then a day-old controversy. Brazill spoke of how devastated she would have felt as a 17-year-old whose sporting role model condemned homosexuality, and how grateful that idol was Liz Ellis.

"I obviously don't know Israel at all, and I think that's the only way I could have looked at: If I hadn't come out yet, how hard would it have been hearing that? What I said got a great response, but I just think I'm so lucky," Brazill says.

"One, I've got my parents who are great role models, but to have sporting idols like Liz is just amazing. Everything she says just blows me away. I just think she's such an amazing human that I'm lucky that I had somebody like her as my role model."

In round four, the Magpies play Maria Folau's Thunderbirds, and Brazill has also been widely quoted for her disclosure that Mrs Folau sent a congratulatory message after her 2016 marriage to Brooke Grieves.

"A lot of people talked about what I said about Maria, but I don't really know her. I know she sent me a message of congratulations when we got married, but that was three years ago and that was the last interaction we had.

"[I don't say that] in a bad way. Maria used to play in New Zealand, I play in Australia, and that's just how netball works. So I think it will be interesting next week: I think some people will have some eyes on us, when we are at the same end of the court, but, nah, we're just playing netball."