Instead of hugging teammates, he was hugging his wife in a Melbourne hospital room while watching the Wallabies battle it out against South Africa on his phone. 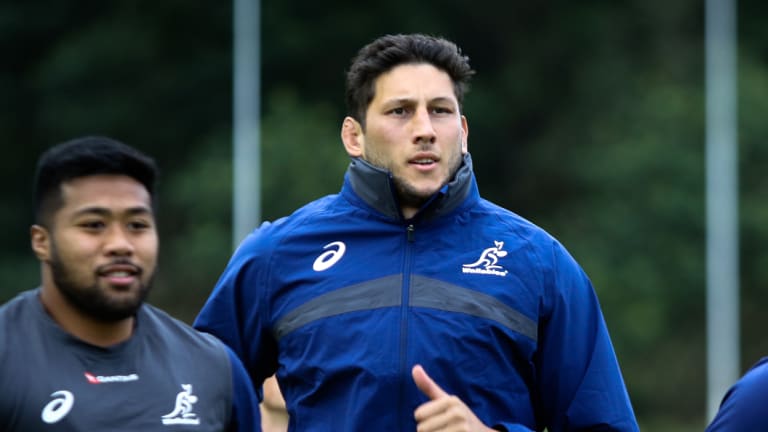 Eight hours earlier, Coleman received a call from his partner, Tonia, saying their baby was on the way and there might be complications with the birth.

Coleman quickly sprung into action, despite having a game that evening at Suncorp Stadium.

He raced to the airport and got on the first available flight to Melbourne. After a sleepless night – Coleman reckons he got about half an hour of shut-eye – he and partner Tonia welcomed Fia Florence Coleman into the world at 12:08pm on the Sunday.

“I can’t really explain it,” Coleman said ahead of the Wallabies’ match against Argentina on Saturday. “It was very emotional for my mum to see the baby. I’m pretty proud of Tonia; she is pretty strong and she is back at home now recovering and the baby is keeping us up at night.

“I apologised to the boys for leaving them that short but it was something that I was never going to miss and I’m glad I did [go]. It was something I will remember for the rest of my life. It was a really humbling experience.

“She would have been a bit bigger if she was on time. She’s a little gem.”

With the baby not quite ready to come into the world, Coleman decided to make the most of his time and do what most other blokes would do – flick on the rugby.

“My partner was laying on the hospital bed and I was watching the game on my phone being very supportive,” Coleman said. “Obviously I wanted to be out there so bad.

“It was all a bit of a rush and credit to the boys that stepped in on the weekend getting the win. Rory [Arnold] and Izack [Rodda] did a tremendous job and [Rob] Simmo as well."

Things have actually panned out quite well for Coleman and his partner given there was the real possibility he would be in either South Africa or Argentina for the birth of his first child.

“We planned the baby shower for this Sunday, so I think everyone will meet Fia at the baby shower,” Coleman said. "We’ve had some nappy incidents already. I don’t think you’re a dad until you’ve been poo'd on. It was an amazing experience and I wouldn’t have it any other way.

“Day-to-day life is so much different already; going to Coles and picking up nappies and wipes instead of dinner. Little things like that have changed a lot.”

The 26-year-old joined teammates on Thursday for training and has been named on the Wallabies' bench for a first outing on the pine since debuting in Sydney against England two years ago.

“There was no pressure to come back into camp and play or do anything,” Coleman said. “It’s a slightly different role but it’s one that I’m willing to do for the team.

“Argentina have a very strong pack. They’re a quality side and they’ve shown that throughout their performances. For us it’s making sure we bring that intent and really try and play on top of them.”