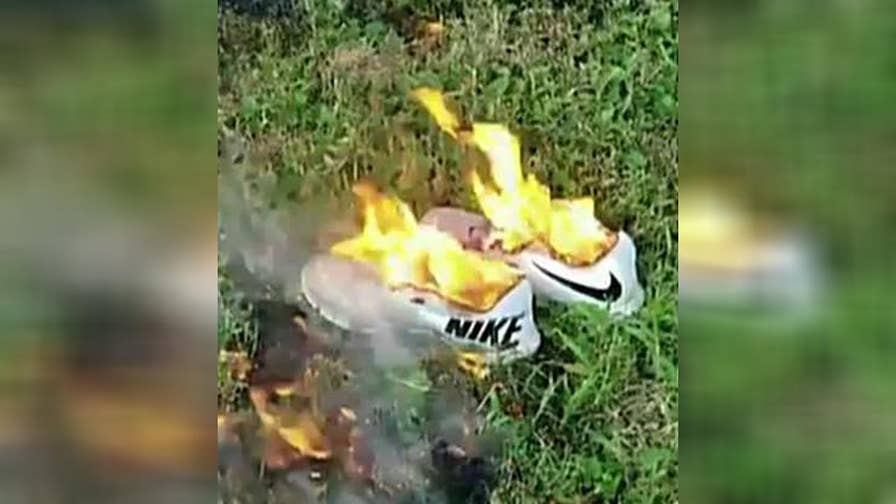 One former Nike consumer burns their shoes in protest.

Nike announced on Monday that Kaepernick would be the new face of the company’s “Just Do It” campaign, which is celebrating its 30th anniversary.

“Believe in something, even if it means sacrificing everything. #JustDoIt,” Kaepernick, who has been with Nike since 2011 and hasn’t played a down of football since he failed to re-sign with the 49ers following the 2016 season, posted on Twitter.

Brennan, CIA Director from 2013-2017, tweeted his support for the former quarterback-turned-social-justice-activist.

“Colin Kaepernick drew our collective attention to the problem of continued racial injustice in America,” Brennan wrote. “He did so not to disrespect our flag but to give meaning to the words of the preamble of our Constitution—‘in order to form a more perfect union.’ Well done, Colin, well done.”

Ahmadinejad, who has lambasted the U.S. repeatedly over the years and led Iran from 2005-2013, also came out in support of Kaepernick.

“The #NFL season will start this week, unfortunately once again @Kaepernick7 is not on a NFL roster. Even though he is one of the best Quarterbacks in the league,” he tweeted.

Kaepernick also received support from several athletes, including Miami Dolphins wide receiver Kenny Stills who has followed Kaepernick in kneeling during the national anthem for the last two seasons.

However, not everyone was happy with the renewed partnership between Kaepernick and Nike. Some took to Twitter to show their burning — literally — rage at the brand’s decision.

Clancy added a video of burning Nike sneakers to his tweet.

“Our Soundman just cut the Nike swoosh off his socks,” Rich wrote. “Former marine (sic). Get ready @Nike multiply that by the millions.”

Kaepernick began kneeling during the national anthem during a 2016 preseason game to protest perceived racial injustices against African-Americans. The movement since took off, garnering the attention — and ire — of President Trump, NFL owners, players and fans of the sport.

The University of Nevada alum has had one of the top selling jerseys in the NFL since he decided to kneel during the national anthem, according to Bleacher Report. He said in 2016 he would donate his jersey proceeds to charity.