For many years, the N.C.A.A. Division I men’s hockey tournament was a celebration of the sport’s aristocracy.

Increasingly, it is becoming a demonstration of the sport’s parity.

Of the 16 teams in this year’s tournament, which begins Friday, only five have won a national championship.

Arizona State, in only its third season playing a full Division I schedule, is the first independent to make the tournament in 27 years. Another first-time participant is American International College, a school of less than 2,000 undergraduates in Springfield, Mass.

The fresh faces have come at the expense of college hockey’s traditional powers. For the first time since 1970, Boston College, Boston University, Michigan, Minnesota and North Dakota all missed the tournament. Combined, they have won 32 national titles.

A variety of factors have contributed to the flattening of the pyramid atop college hockey.

N.H.L. expansion and the growth of youth hockey in places like Illinois, St. Louis and the Sun Belt over the past couple of decades have deepened the player pool. Top-level recruits have more attractive destinations to choose from with the rise of programs like Penn State, Arizona State and Minnesota Duluth, which has won two titles since 2011 and is the top seed in this year’s Midwest Regional.

Two of the top six overall seeds in this year’s tournament — No. 2 Minnesota State and No. 6 Quinnipiac — were Division II programs in the 1990s. Over the last seven seasons, though, they have the most wins in college hockey.

Minnesota State has yet to win a N.C.A.A. tournament game in Division I, but Quinnipiac has reached two Frozen Fours and lost in the championship game to Yale in 2013. 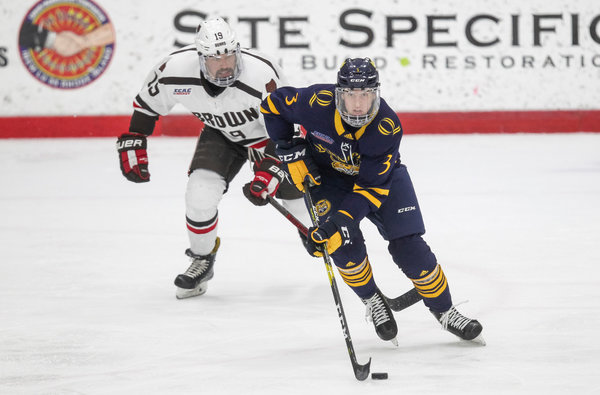 Quinnipiac Coach Rand Pecknold, who earlier this year won his 500th game at the school, attributed the success of programs like his to focusing on recruiting “the right type of player.”

“We’re winning with a lot of kids nobody wanted,” he said. “They’re our bread and butter.”

He added: “Success depends on more than just having talent. You need an identity and a culture.”

A.I.C. Coach Eric Lang won only eight games in his first season, 2016-17. But last season the Yellow Jackets won a postseason series for the first time, and in 2018-19 they had the best regular-season record in Atlantic Hockey and won the conference tournament.

“Every team has to find their competitive advantage,” said Lang, whose team faces top-seeded St. Cloud State on Friday. “For us, it was going over to Europe to recruit. We’re probably 60th among the 60 Division I teams in terms of resources, so we have to turn over every rock here.”

While the most prominent programs continue to get more than their share of top N.H.L. draft picks and players from USA Hockey’s National Team Development Program, many of these players leave college after one or two years.

At rising programs, the rosters are stocked with players from the amateur United States Hockey League or the top Canadian junior leagues. These players not only typically stay in college for at least three years, but they also start their college careers at an older age. It’s not unusual for 17- and 18-year-olds to be playing against skaters six and seven years older.

The teams with older players have more continuity from year to year, as well as more critical experience in postseason play. Four teams in the tournament — Minnesota State, Arizona State, A.I.C. and Ohio State — have an average age over 21.

“There’s a ton of really good players out there, and there aren’t enough stalls with only 60 teams,” said Arizona State Coach Greg Powers, whose team plays Quinnipiac on Saturday. “And when you get older players, they’re ready-made for college hockey from the physicality standpoint.”

Michigan Coach Mel Pearson led the Wolverines to the Frozen Four in 2018 but finished 13-16-7 this season.

Referring to the changing dynamics in college hockey, particularly the balance between recruiting players the N.H.L. covets and building an experienced roster, Pearson admitted: “I don’t think we’ve adapted yet. We’re still trying to figure it out.”

“In basketball, you can win with three players,” he added. “In hockey, you need nine or 10 pretty good players for a chance to compete.”

Perhaps the team with the most daunting route to the tournament was Arizona State. With no conference affiliation, the team regularly traveled far for games, and most of its home games were played at a community ice rink with less than 1,000 seats.

Eight months after winning the national club hockey title in March 2014, Arizona State announced it would play as a Division I program for the 2015-16 season.

“We just jumped into it and had to figure things out along the way,” said Powers, who coached the club program after playing goalie for it in college. “We learned that it’s O.K. if you don’t have the answers right away.”

The players from his first recruiting class are seniors this season. Powers said he expected to be playing in a new on-campus facility sometime during the 2020-21 season, an indication of the university’s commitment to hockey.

Boston College won the last of its five N.C.A.A. titles under Jerry York in 2012 and has reached the Frozen Four twice since, but the Eagles have missed the tournament three years in a row.

“Everybody’s putting a lot of resources into their programs now,” York said. “I think it’s great for college hockey. We’ve got to keep growing our sport.”