Islanders goalie Robin Lehner heard his name chanted loudly at Nassau Coliseum in the closing minutes of Sunday’s 3-0 win over the Anaheim Ducks, another sterling performance in a renaissance season for him and his team. He clapped in appreciation and smiled toward the sellout crowd.

Ten months ago he had reached rock-bottom. As he wrote in an essay for The Athletic in September, Lehner was drinking a case of beer a day and taking pills to sleep. He thought about suicide. Then in March he had a panic attack during a game with the Buffalo Sabres. Soon he entered the league’s substance abuse recovery program and received a diagnosis of bipolar disorder with manic episodes.

Now, he is 10 months sober and an integral part of the Islanders’ stunning turnaround under their new coach, Barry Trotz.

Last year the Islanders allowed a league-worst 293 goals. Behind their goalies Lehner and Thomas Greiss and Trotz’s defense-oriented game plan, the team has reversed course, winning 15 of its last 19 games heading into the All-Star break this weekend. They are in first place in the Metropolitan Division, a position few pundits thought even remotely possible before the season.

“We started off the year with a belief in a new coach and new system and I think everyone has bought in,” said Lehner, who is 15-7-4 with three shutouts, already surpassing his victory total with the Sabres last season. “When you come to work with purpose every day and everyone buys in every day, it gets the focus going.”

Since last March Lehner has worked to resuscitate his personal life and on-ice livelihood. Admitting he had never had a sober season during his hockey career, he focuses daily to control his addiction.

“I’m an alcoholic and I have a few other things, but it’s treatable,” said Lehner, who was also found to have A.D.H.D. and post-traumatic stress disorder. “I was in a very dark place. I didn’t see much in the future at one point. Now I feel good. I’m coming along.”

Lehner, whose father was a goaltending teacher for the Rangers star Henrik Lundqvist in Sweden, played parts of five seasons with the Ottawa Senators before tending goal for the next three years in Buffalo.

Islanders General Manager Lou Lamoriello signed Lehner to a one-year contract in July and paired him with Greiss under Trotz and the goaltending gurus Mitch Korn and Piero Greco.

“I knew about the ability and talent he had and things for whatever reason went in the wrong direction,” Lamoriello said during training camp. “I just called — I knew the agency that he is with — and I said, ‘why don’t you come in and let’s have a conversation.’ It was something we felt very comfortable with.” 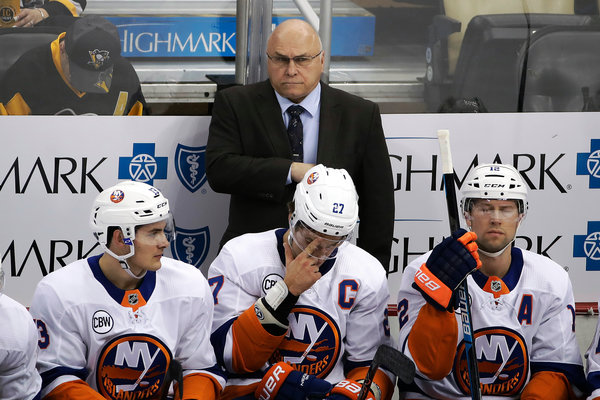 The Islanders have emerged as a surprising story line after the departure via free agency of their former superstar captain John Tavares to the Toronto Maple Leafs. Fans were furious over Tavares’s exit and seemed resigned to a rebuilding season. But the team’s defense has forged a fresh confidence under Trotz, allowing a league-low 118 goals through 49 games.

The offense has flourished with steady production from all corners. Eight Islanders have scored at least 11 goals, the first time since the 1984-85 season that the team has generated such a balanced attack at this juncture of the season.

Lehner emphasized that success is a byproduct of the team’s cohesiveness. Players and their families live in proximity of one other, the team’s practice home in East Meadow, and Nassau Coliseum, where they are playing half their home games this season.

Lehner said he detected a positive environment with his new squad even before moving to Long Island to train with his teammates over the summer.

“I hadn’t played with anyone on this team before, but as soon as I signed, I think the whole team sent me a text message,” said Lehner, who has a young son and daughter with his wife, Donya.

Cal Clutterbuck, an Islander since 2013, has marveled at Lehner’s focus and dedication from the start of their relationship on the ice.

“You know you can’t go through something like that alone, and he’s got a nice support system here,” Clutterbuck said. “He’s living his life the right way and getting rewarded for it.”

Trotz, who also heard his name chanted Sunday as the Islanders won for the fifth time in seven games back at their raucous former home, said Lehner’s achievements in tandem with Greiss are a boon for the team’s psyche.

“He knows how important he is,” said Trotz, who joined the Islanders after winning the Stanley Cup with the Washington Capitals last season. “He and Greisser have been exceptional. When you feel that you’re part of the success and part of the reason you’re having success, it’s got to feel good.”

Amid the relentless swirl of the season, Lehner said he had not fully absorbed what his turnaround might mean for those encountering similar life battles. He is more focused on managing his crease and being a husband and father.

“I still have a lot of emails and letters to go through,” he said. “It’s not about being an inspiration figure. It’s about shining a light. If you have these problems, it’s treatable. You need to get help. You need to find support. You can’t do it alone. That’s all the message there is.”

And Clutterbuck said Lehner’s revival has inspired him and by extension, the entire team.

“He’s had a glimmer in his eye all season,” Clutterbuck said. “We are rooting for his success, all pulling for Robin as a person. I couldn’t be happier for him.”