There’s more than just three points on the line for Sydney FC on Friday night.

Alex Brosque, the Sky Blues' captain, believes they must also take the opportunity to land a devastating mental blow on Adelaide United by beating them at the same venue they'll contest the FFA Cup final.

Sydney FC open the new A-League campaign against the Reds at Coopers Stadium. Then 11 days later, the two sides will reconvene at the same location to battle for the first piece of domestic silverware on offer this season. 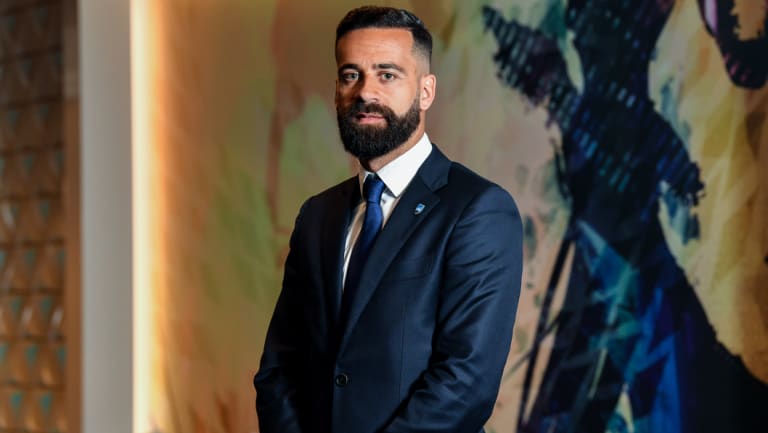 Whoever wins the first match will probably head into the second as favourites, and with a handy psychological edge. As holders of the FFA Cup and the reigning A-League premiers, Brosque could think of no better way to begin life under new coach Steve Corica.

"This is a big game on many fronts," Brosque said. "Obviously round one you want to start the season off well but looking towards the final, I think we can send a bit of a message to them if we were to put in a dominant performance and beat them down there in front of their home crowd. Psychologically, that could do a lot to them."

It won't be easy. Adelaide are tipped to be one of the big improvers this season and have recruited well, re-tooling their attack with the signings of fringe Socceroos wingers Craig Goodwin and Ben Halloran – both of whom were reportedly targeted by Sydney.

But Brosque, who turned 35 last week, is keen to make the most of every moment he has left in a Sky Blue shirt. He nearly gave the game away in the off-season but convinced himself to squeeze out at least one more year from his creaking body for the sake of continuity. Just because Graham Arnold is gone and his former assistant Corica is now the boss doesn't mean Sydney's era of dominance should end now.

"Obviously Arnie, what he did at the club, has been fantastic but I wanted the players to get the same sort of credit," Brosque said. "They did so much to achieve all the records and everything in the last two years. I wanted to hang around and make sure everything continued, that it didn't fall away just because now Arnie's gone. I didn't think that was a reason that everything should sort of implode on the playing field."

Brosque was content to play a bit-part role off the bench, cognisant of how the likes of Matt Simon and David Carney still managed to make major contributions to Sydney's recent successes while in the twilight of their careers. But those plans will go out the window, at least for the first part of the season. Daniel De Silva's slow recovery from a hamstring issue and Trent Buhagiar's unfortunate ACL injury at training last weekend will mean Brosque will be thrown right into the thick of things from the outset, alongside exciting new recruits Adam le Fondre and Siem de Jong.

"I came into the season with a certain frame of mind and that's been changed very, very quickly," Brosque said. "The plan was when I spoke to Corica about my role this year, he mentioned that he didn't want me fixated on the one option only – that I would be a bench player, or play reduced minutes all the time. But if for whatever reason the recruitment wasn't there, injuries or whatever, I had to be prepared to play. So that is exactly what it is."

Brosque is excited about what this new-look Sydney team can do. "With [le Fondre] up front, I think we lose nothing at all," he said. "He's got a great eye for goal. I see it every day at training. He has what top strikers in the world, you can't teach – that ability to make something, a chance out of nothing. So I think with him we've got a bag full of goals and Siem, he's all class. The more the season goes on, the more everyone will see. I genuinely think that this year we've got more depth than we ever have."

Having briefly contemplated retirement before thinking better of it, Brosque seems refreshed, as if he has found a second wind. And while this season is likely to be his A-League swansong, if he comes through it unscathed, he may yet go around again.

"Speaking to a lot of good mates that aren't playing anymore and have retired … once you're done, you're done, basically. There's no turning back from that," he said. "If I feel good doing this, there's no reason why I probably can't do it for a little bit longer. Any year right now could be my last. Right now it's about enjoying it, understanding that every player does play a role. Whatever mine is this year, I'm happy to play."