Mask Of Time had the Coongy Cup won then lost in the straight before fighting back to dead heat with Best Of Days in a memorable race that finally ended half an hour later in the stewards room when a protest lodged by Mask Of Time jockey Kerrin McEvoy was dismissed.

A disappointed Mask Of Time trainer Ciaron Maher, who works in partnership with David Eustace, shook hands with Best Of Days' trainer James Cummings after the decision was delivered in even tones and tried to process what had just happened. 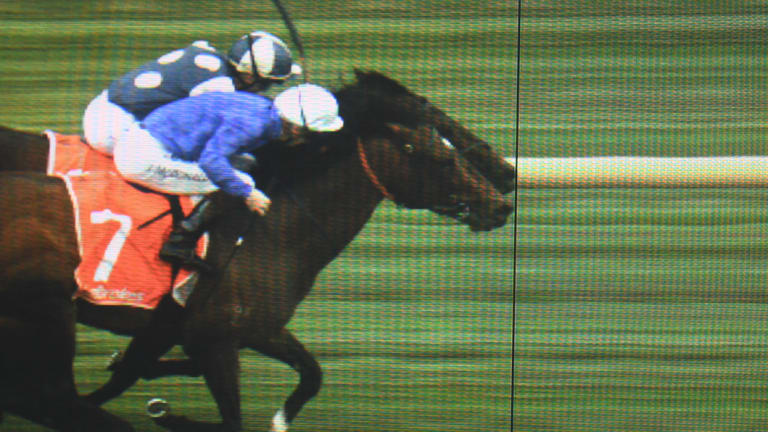 Best Of Days (No. 7) and Mask Of Time can’t be split at Caulfield.Credit:AAP

"I don't like to share but they were racing pretty close and they bumped so I thought there were definitely grounds for protest but we laid it all out there and they opted to leave it the same so I will have to settle with sharing," Maher said.

He was pleased with the run as the five-year-old looked set to run second when Best of Days headed him in the straight after he had been forced to lead when the speed went out of the race after Trap For Fools was scratched.

"He is a proper horse. He has taken a while to get confidence."

Maher suspects he might become a Doomben Cup horse in time but his next assignment would be the Emirates Stakes over 2000 metres on Derby Day.

The dismissal of the protest was a win for Cummings as the stewards would not have needed to have seen much interference to have taken the half-share from him.

As Maher said in his evidence, he was "only looking for a millimetre" but the stewards found both horses had raced without hindrance as they fought their way down the straight.

Cummings said he would need time to decide what his next move would be for Best Of Days and there was a chance he might tip him out as he was satisfied with his development during this preparation.

If not, he would wear blinkers, Cummings said, just to keep him focused.

"He has been a work in progress for a long time," he said.

"He really felt the run against Furrion three weeks ago and I think it took a toll late."