Western Bulldogs' defender Zaine Cordy expects the new 6-6-6 rule being introduced to increase the number of one-on-one battles between forwards and backs.

And the 22-year-old can't wait to test himself in them, although he has one qualifier.

"As long as they are not too deep in the forward line," Cordy said. 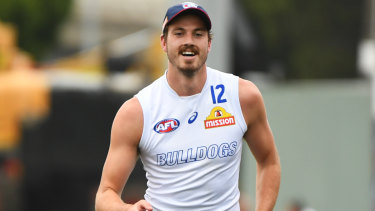 He expects the rule, which requires six players from each team to begin each centre bounce inside the 50-metre arcs with at least one of the six starting inside the goal square, to ease congestion and leave defenders and forwards exposed in one-on-one contests.

"One of the best things about our game is the one-on-one physicality," Cordy said.

Having played in a flag at centre half-forward in just his 11th game, Cordy has reconciled himself to the fact he will spend most of his time in defence in 2019, playing alongside what he hopes will be a more settled backline with Dale Morris, Easton Wood and Aaron Naughton all fit and available.

He said he doesn't have to change his game much, following Luke Beveridge's exhortations to play on instinct and back himself.

"It's been going pretty well so far," Cordy said.

However, he knows as well as anyone the importance of having a settled structure after the backline was decimated by injury last season.

"If we can get a good core of 25 players who can stay healthy I reckon we have a fair crack this year," Cordy said.

Unfortunately the club lost one of their heart and soul players for the next two months after Lin Jong tore his hamstring at training on Thursday.

"The sad thing is he has been training really well this year. He has had a horrible run with injuries so hopefully he can get back fighting fit but, yeah, it is going to be a pretty tough two months for him," Cordy said.

"He is a pretty loveable character and the boys will all get around him." 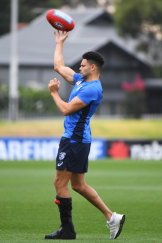 Apart from Jong and Jason Johannisen, who remains in a moon boot after injuring his ankle eight days ago, and Tom Boyd, who is restricted to light duties as he battles a back problem, the Bulldogs are in reasonable shape ahead of their first JLT Community Series game against the Gold Coast in a fortnight.

With two games to play until he reaches his 50th, Cordy, who is only reaching the stage where tall defenders begin to emerge, appears ahead of the curve.

How he needs to change to flourish under the new rules remains to be seen but he is full of confidence it won't be an issue.

"It's actually a little bit better … especially when teams are up and they are trying to flood the backline," Cordy said.