Richmond have ruled out captain Trent Cotchin and key defender David Astbury for their AFL match against Essendon.

The Tigers will make at least four key changes for the Friday night match against the MCG, with Dion Prestia (hamstring soreness) and Kane Lambert (ankle surgery) already out of action. 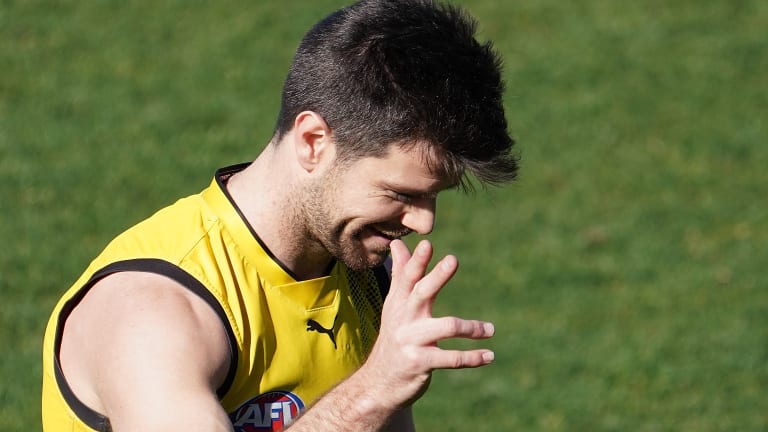 Out: Trent Cotchin won’t play against the Bombers.

Dan Butler also had ankle surgery earlier this week as the reigning premiers prepare for the finals.

Richmond are guaranteed a top-two finish with two rounds left, meaning they will host a qualifying final at their MCG fortress.

Cotchin and Astbury were glaring absentees from the captain’s run on Thursday morning at Punt Rd.

Richmond then confirmed Cotchin has hamstring soreness and Astbury is out because of Achilles soreness.

The four changes are a massive boost for the Bombers, who must upset the Tigers and then beat Port Adelaide away to maintain their slim finals hopes.

Essendon are a game plus percentage outside the top eight, meaning they also need other results to go their way.

While Astbury was absent, young defender Ryan Garthwaite took part in the training session as did midfielders Reece Conca and Sam Lloyd.

All three are chances to return in Friday night’s match.

Tigers coach Damien Hardwick held his weekly media conference on Thursday morning, before the news broke at training about Cotchin and Astbury.

Hardwick is confident Prestia will miss only a week. Injuries have restricted the premiership onballer to 10 matches this season.

‘‘We’re probably in the situation at the moment, coming into the pointy end, we’’ll take a really conservative approach with those players who need it,’’ Hardwick said.

The Tigers also are confident Butler and Lambert will be ready for the finals.

Conca was ruled out initially this week – he is returning from a dislocated ankle and then suffered an ankle sprain last weekend in the VFL.

But Hardwick said Conca had recovered quicker than expected from the minor setback.

‘‘I must admit when we heard the news [ankle sprain] up on the Gold Coast, we were really concerned,’’ Hardwick said.

‘‘It’s come back less serious than what we thought, so that’s a real positive.

‘‘It’s about time that kid had some luck.

‘‘Whether he plays this week, he’ll certainly be around the mark.’’

Hardwick said the Tigers have much to work on over the next fortnight, despite being guaranteed the home qualifying final.

‘‘We still have to settle on our best side – we still have to get those players available to play and [playing] their best footy,’’ he said. ‘‘There’s always something riding on it.

‘‘They’ll come out and play their best footy, that’s what we require them to do and in fairness, that’s what Trent demands that they do.’’

News of Cotchin’s rest comes a day after he signed a two-year contract extension.