Could Moody have been Godophin's main man? He never got to find out

Australian horse players have become used to seeing Godolphin's English trainer Charlie Appleby come out and mop up some of the spring carnival's big prizes in recent years.

But could it have been Black Caviar's trainer Peter Moody arriving on these shores every 12 months to supervise the Blue Army's raid on the lucrative Melbourne carnival? 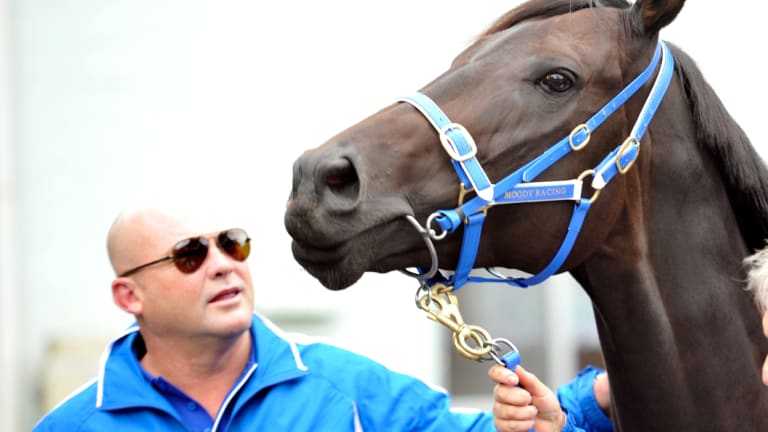 Moody revealed that six years ago he had been very tempted by the prospect of relocating to England and had inquired whether he might have a chance of becoming one of Godolphin's trainers at Newmarket.

The opportunity arose after the Mahmood Al Zarooni scandal, when in April 2013 Zarooni received an eight year suspension after he admitted administering anabolic steroids to a total of 15 horses at Moulton Paddocks, his stable just outside Newmarket.

He had occupied the yard since his appointment by Sheikh Mohammed, the Godolphin boss, in March 2010.

In the end Appleby, who had been working for Godolphin for several years, was appointed as his successor.

But Moody told RSN radio on Monday that he had been interested in the position.

''I actually rang Henry Plumptre (then Godolphin's Australian boss) five or six years ago. and asked him to throw my name in the hat when the position that Charlie Appleby has now came up. [It was] just a curve ball.''

Moody said he had floated the idea through a sense of adventure and for the possibility of a fresh challenge.

''I just thought it would have been a great challenge, I always just wondered if our Australian methods would have worked in Europe,'' he said.

In Europe trainers tend to prepare horses to run over distances while in Australia sharpness is encouraged.

''The way we train our horses for a turn of foot. It might have been a total disaster, I don't know, but what better way to do it with a benefactor like the Sheikh and a stable full of horses and a little bit of trial and error to see.

''Alternatively you were going to learn a lot (through the experience).''

That was around the time of the Black Caviar retirement.

Moody subsequently copped a six-month ban from Melbourne stewards after being cleared of a deliberate doping charge but being convicted for unintentionally administering his horse Lidari with a product that produced excessive cobalt levels.

He shut down his training operation in 2016 and now works as an industry consultant and in the racing media.