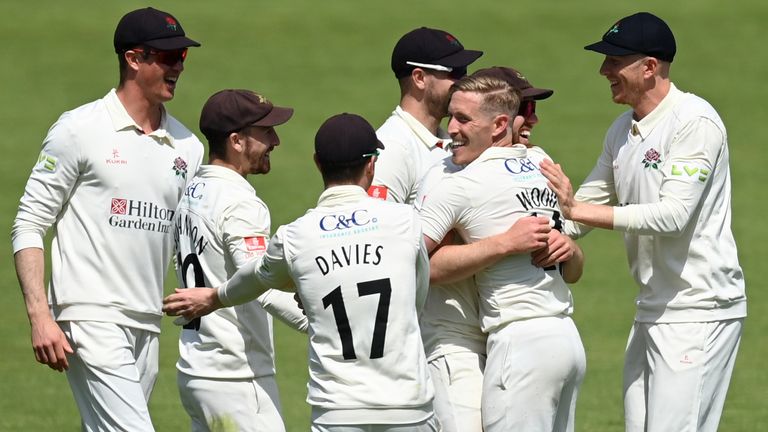 Tom Bailey claimed 3-6 in 14 overs and Alex Davies hit a breezy 52 as Lancashire made a flying start to the LV= Insurance County Championship Roses fixture.

Seamer Bailey was superb as Yorkshire were bowled out for 159 at tea in front of Emirates Old Trafford’s first first-team crowd for 617 days.

Yorkshire slumped to 40-7 before lunch, only for 19-year-old wicketkeeper Harry Duke to add respectability with a composed 52 off 120 balls in his second first-class appearance.

But opener Davies hit eight fours in 57 balls as Lancashire ended day one in total control at 95-1 from 31 overs, with this a fixture between Group 3’s top two sides.

The Lancashire opener brings up his half-century from 53 balls with eight boundaries, none better than this drive a couple of overs ago.

A captain’s innings of 103 not out by Hashim Amla guided Surrey to 285-5 on the opening day against Group 2 leaders Gloucestershire at the Kia Oval. Surrey v Gloucestershire scorecard

Amla batted serenely for five hours, facing 200 balls, although slow left-arm spinner Tom Smith – who wheeled away without reward for 23 overs – was distraught to see Miles Hammond at slip fail to hold an edged cut when the former South Africa batsman had made 76.

Jamie Overton scored a responsible unbeaten 50, adding an unbroken 104 with Amla for the sixth wicket to ensure it was Surrey’s day, while Ryan Patel also passed fifty.

A second century of the season and his first as skipper. A standing ovation from The Kia Oval crowd.

Left-arm paceman David Payne, who reached 300 first-class wickets, was the pick of a persevering Gloucestershire attack, but the Amla drop might prove a key moment in the game.

Crowds returned to the Emirates Riverside for the first time in 611 days and were entertained with 15 wickets falling on day one of Durham‘s game against Essex. Durham v Essex scorecard

The Essex innings had looked in a strong place following Michael Pepper’s maiden first-class fifty but a collapse that saw them lose six wickets for just three runs appeared to give Durham the upper hand.

But Essex came back strongly as their bowling trio of Peter Siddle, Sam Cook and Jamie Porter picked up five wickets between them to leave Durham struggling on 58-6, trailing by 124 runs at the close of play.

The home side closed the first day on 250-6, having been 238-3 after Nottinghamshire, chasing a fourth successive win, had failed to make the desired early inroads in humid conditions.

Warwickshire captain Will Rhodes led the way for his side with a resolute 91 (188 balls, 10 fours) before falling to the last ball before tea. Sam Hain (61) and Matt Lamb (43no) added 75 in the final session before Paterson’s burst of three wickets in 14 balls evened the day up again.

Sanderson took 10 wickets against Sussex earlier this month and his high-quality opening spell, when he took 3-17, helped reduce the hosts to 30-4. 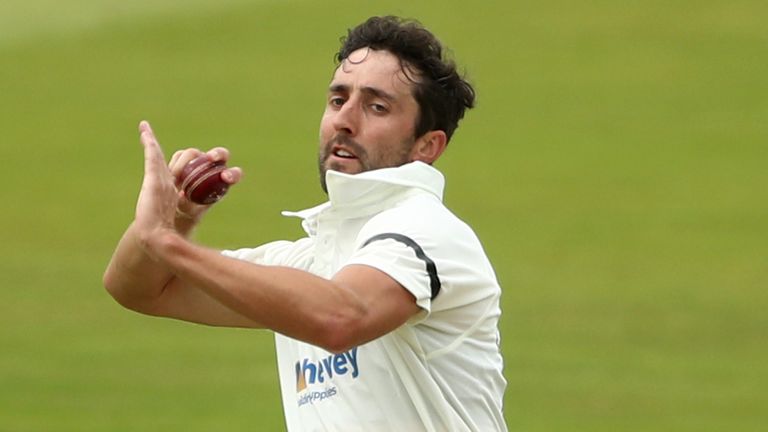 When Sanderson took his fourth wicket with the second ball after lunch Sussex were in dire straits on 67-8, but Jack Carson led a fightback with 52 – his maiden first-class half-century – as the last two wickets added 108.

A seventh-wicket partnership of 90 between John Simpson and 20-year-old Luke Hollman rescued Middlesex on the opening day of their match at Leicestershire. Leicestershire v Middlesex scorecard

Left-arm spinner Callum Parkinson took 3-76 as Middlesex stumbled to 132-6 in the afternoon session, but wicketkeeper Simpson fought back with his second half-century of the season and found good support from Hollman (32), a leg-spinning all-rounder playing in only his third first-class match.

Simpson was still there on 73 as Middlesex closed on 260-7, which may be a competitive total on a pitch expected to offer more help to the spinners as the match progresses.

Worcestershire batsman Jack Haynes hit his career-best score but fell just short of his maiden first-class hundred on day one of their match with Derbyshire at New Road. Worcestershire v Derbyshire scorecard

Haynes batted in impressive fashion to move within three runs of reaching three figures but was denied a century when he was caught on the boundary off spinner Matt Critchley on 97.

Brett D’Oliveira also produced an excellent knock of 71 as Worcestershire recovered from 62-3 to total 330-7 by the close on an excellent cricket wicket which gave some encouragement to bowlers but also allowed batsmen to play their shots.

Watch day two of the Roses match between Lancashire and Yorkshire in the County Championship from 10.55am, Friday on Sky Sports Cricket.