He’d had enough of Cronulla, enough of coach Shane Flanagan (even though he was suspended) and enough of waiting for the chance to join North Queensland with one season remaining on his Sharks deal. 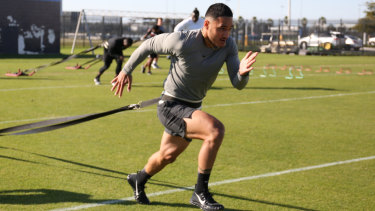 Clear intent: Valentine Holmes insists his sole focus is on making it in the NFL.

Holmes has been linked to the Cowboys for years. He’s from Townsville and his partner’s sister is married to their halfback Michael Morgan.

Instead of snapping up the Sharks’ five-year, $5 million deal to extend his contract, Holmes decided he wanted to flirt with the NFL but when it all falls over join the Cowboys in 2020.

I mean, why else would a 23-year-old Australian and Queensland walk away at the peak of his powers with the gravy train about to pull away from the station? Why else would he chase an impossible dream? Is it really his dream?

Because he’s going to the Cowboys. Expect denials. You heard it here first …

“No,” Holmes says. “This is what I came to do. I wouldn’t have given up everything to just do this for a year. I want to try and do this for as long as I can.”

Then this: “But it’s cutthroat here, you don’t know what could happen in the future. I don’t have those glass balls [sic] or anything. If I didn’t like it or if I didn’t get picked and I’m not good enough, I’d obviously just go home to Townsville.”

His answer is about as clear as the other one I was chasing on this grey afternoon at the IMG Academy in Bradenton, Florida, where Holmes and six other gifted athletes from other sports and countries attempt to learn the intricacies of a foreign code.

Is he any chance of playing in the NFL, as Jarryd Hayne did for the San Francisco 49ers three years ago? 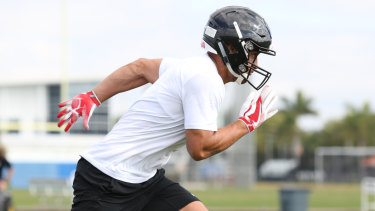 Adjusting to the playing equipment is all part of Holmes’ journey.

On Thursday (Friday, AEDT), Holmes pulled on his enormous shoulder pads for the first time since joining the NFL’s International Player Pathway Program and, for the next hour-and-a-half, ran and danced and stepped and moved and cut and caught balls both long and short as enthusiastic coaches barked at him: “That’s it baby-baby-baby! Now you’re lookin’ like a player!”

And he did. A rugby league player trying be an NFL player.

With the unfamiliar pads on his shoulders for the first time, Holmes struggled now and then to reach up and catch the ball. But he still possessed the same raw athleticism he displayed in rugby league, especially towards the end of last season when his form almost dragged the Sharks into the grand final.

For much of the session, Holmes was in competition with Christian Wade, a 27-year-old rugby player who played six matches for England and scored a bunch of tries for Wasps.

The pair did much of this with running back coach Earnest Byner barking and cajoling from close range.

“See him in those pads, man?” Byner asks after the session. “Valentine’s picking things up. The professionalism he’s shown in rugby transfers to this. He and Christian are competing against each other and coaching each other.”

Wide receiver coach Larry Kirksey sees one attribute in Holmes above them all. “Oh, he’s tough,” he says, nodding knowingly. “You can tell he’s a rugby [sic] player. You can see that. The ball is a little smaller but he catches it extremely well.”

The coaches might be excited about what they see from Holmes but his decision to abruptly walk out on the Sharks with one season to go angered many in the Shire, especially captain Paul Gallen who said Holmes had “let the club down”. 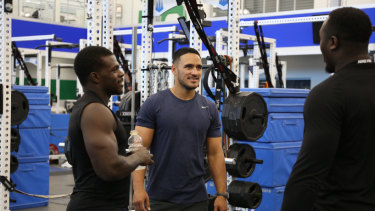 Holmes (centre) faces some tough opposition in his bid to make a roster.

Fair enough. Gallen, his teammates and club officials were seething that they’d lost their star player just weeks before the pre-season started. They signed Shaun Johnson from the Warriors, sure, but it still left a gaping hole in their roster heading into the 2019 season.

But then Gallen went too far.

“A bloke breaking a contract with one year to go and just walking out on a club and the game. I think it’s got to be a minimum two years out of the game, if not out forever.”

“I don’t see how this is good for the integrity of the game.”

The Sharks have done far more damage to the “integrity of the game” in recent years than Holmes leaving to pursue an NFL career or whatever he wants to do if it doesn’t work out.

It’s understood he was bemused by Gallen’s remarks, although Gallen phoned soon after to clear the air.

“He was saying what’s best for his club [with those remarks],” Holmes says. “I don’t read too much into it. He knows that. He gave me a call after. We’re still mates. It’s nothing to me.”

When Holmes and Taumalolo participated in NFL trials in Los Angeles in late 2016, it was seen by most for what it was: an attempt to pump up their market value.

Orr also understands the opportunities in the NFL better than most of his peers in Australia.

He pushed former South Sydney giant Jordan Mailata into the same international pathways program a year ago. Until then, the best Mailata could expect was a $5000 contract with North Sydney, the Rabbitohs' feeder team at the time.

He knocked it back, went to the IMG Academy and later that year was drafted by the Philadelphia Eagles on a deal worth $3.5 million. 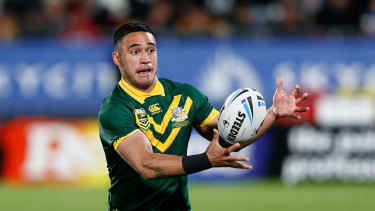 Holmes sacrificed a mega deal and representive honours to chase an NFL contract.Credit:AAP

Holmes has another nine weeks of this before talent scouts from NFL teams visit in March to run an eye over him and the other six hopefuls. They could sign him as a free agent but, if not, he could be placed on a team’s practice squad for the rest of the year because he’s part of the international program.

If there is one thing that’s certain about the NFL it’s that it’s fantastically uncertain and complex. Holmes isn’t entirely sure what he’s got himself into.

“I don’t really know how it works,” he smiles. “I’m not focussed on that. I’m just here to train hard.”

Not a bad theory.

Andrew Webster travelled to Atlanta as a guest of ESPN. Super Bowl LIII — LIVE on ESPN, Monday, February 4, from 9:30am.