Coaches are forever banging on about completion rates. Hold the footy and you win the game.

North Queensland, in taking on the premiership heavyweights the Roosters, did not drop the Steeden until there was two minutes and 33 seconds left on the clock. They finished with a completion rate of 35 from 36, a a tick over 97 per cent. And they got dusted. 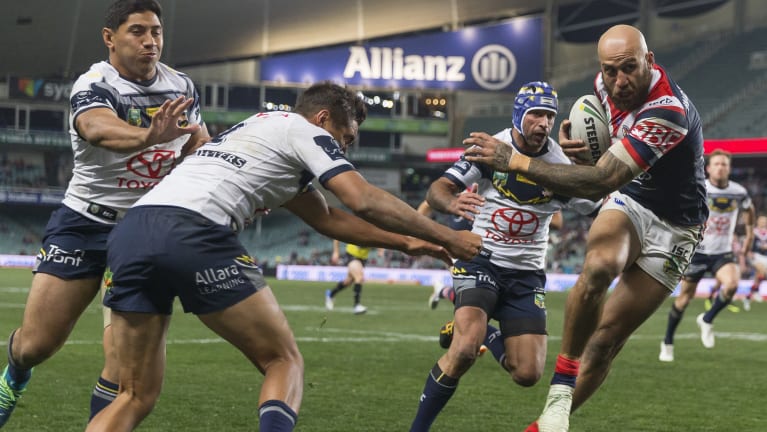 Stepping through: Blake Ferguson beats Johnathan Thurston to cross for the Roosters at Allianz Stadium.

There appears to be a spate of potential grand final previews at the moment. We had one last week when the Roosters smashed the Dragons. Another on Friday night when Souths beat the Storm. And then there’s next Friday’s blockbuster between those old sparring partners, the Roosters and the Rabbitohs.

But if you had to make a prediction on who would be there on the big day at the start of the season, there were plenty of people telling you it could well be contested between North Queensland and the Roosters. 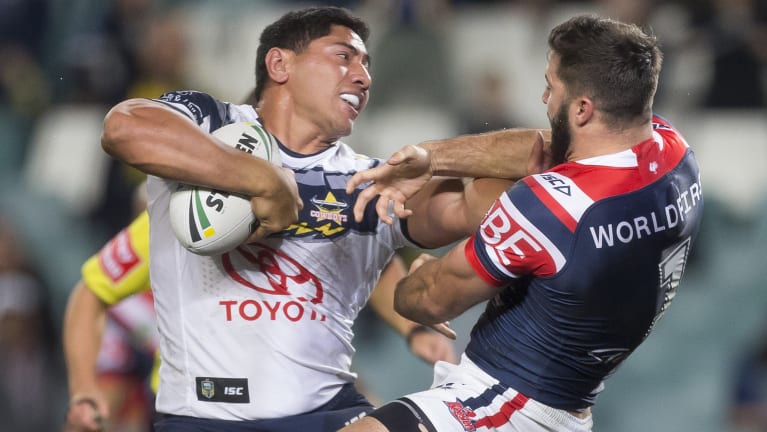 Don’t argue: Jason Taumalolo runs over the top of James Tedesco to score.

That will clearly not be happening. This is as close as the pre-season fancies will get to big-time September footy, a round-21 clash most notable for being the last time Johnathan Thurston shares a football field with Cooper Cronk.

The Roosters may yet do a lap of honour. The Cowboys, incredibly, are in contention for nothing but the wooden spoon. Both teams put on a performance befitting their potential as the Cowboys mounted a big comeback. The Roosters were up by 18 points and appeared to be cruising to a blowout victory, but had to be content to get home in a nail-biter. 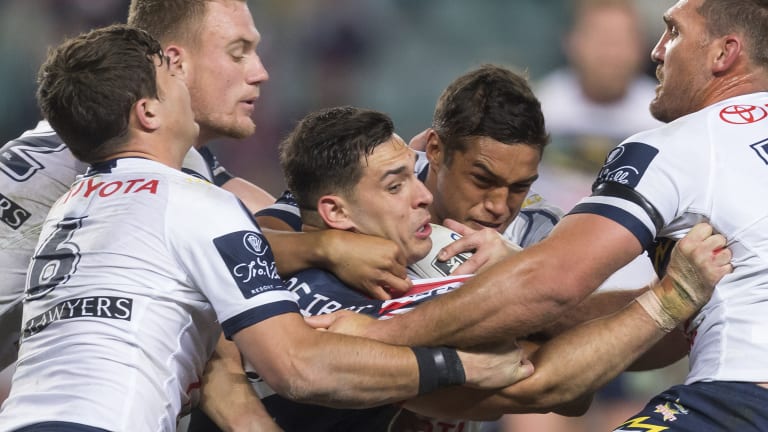 Despite having some of the most exciting attacking weapons in the game, both sides can be accused of negative play. What is with this obsession with kicking penalty goals? One of Thurston’s attempts came when his side were six behind.

The Roosters also opted against a tap at a time when their opponents were on their goal line and faced the prospect of being a man down if they conceded another penalty.

Thankfully, they gave us some great attacking footy as well. The first try, to none other than man-of-the-moment Latrell Mitchell, is what rugby league is all about. A beautiful shift to the left, involving James Tedesco and a lovely short ball from Boyd Cordner, resulted in Mitchell planting the ball down and performing his trademark kangaroo celebration.

His centre partner, Joseph Manu, scored one just as spectacular, even if there was a hint of a bobble during the ground. When wingers Blake Ferguson and Daniel Tupou got in on the act, it looked like it would get ugly for the Cowboys at Allianz Stadium.

Yet they almost stole it. 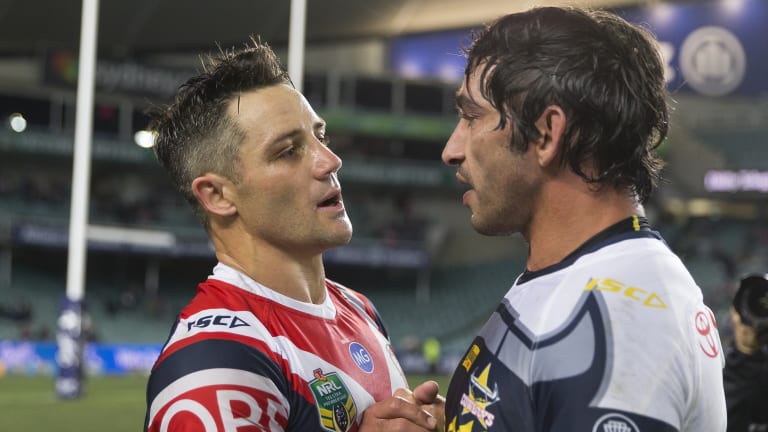 When Jason Taumalolo broke through the line and the only thing standing in his way was Tedesco, it was one of those car-crash moments – you knew there was going to be carnage, but you couldn’t look away. There is not a man on the planet that could have stopped him. And in one of his farewell games, Thurston scored a try. The conversion pushed him into third place on the all-time points-scorer’s list, passing Andrew Johns.

He would have traded it for a victory, but it was not to be.

Afterwards, the Roosters honoured Thurston with a guard of honour. Coach Trent Robinson presented the match ball and then offered the highest compliment.

“We really wanted to honour him as a person," Robinson said.

"We wanted to beat him tonight in the game but we also wanted to honour the legacy he has left.

“I said to him we were fortunate to have a guy called Artie Beetson at our club, who left such a big impact on our game, the club and Australia when it came to our first indigenous captain.

“‘JT’ left a similar legacy to Artie Beetson. That’s the biggest wrap I can give him.

“We didn’t want to let that pass.”

With the game over, we look forward to the action to come. Next week’s Rabbitohs-Roosters clash, another potential grand final preview. Next week the Cowboys take on the Broncos in the local derby. That will be their grand final.