The 23-year-old started the season as a back-up for fullback Billy Slater and five-eighth Cameron Munster, but his form was so compelling during State of Origin Bellamy decided he couldn’t leave him out.

Bellamy brought Hughes into the halfback role in the lead-up to last weekend's 12-6 win over the New Zealand Warriors. He is the third halfback used this season with Brodie Croft starting the campaign and Ryley Jacks playing the middle rounds. 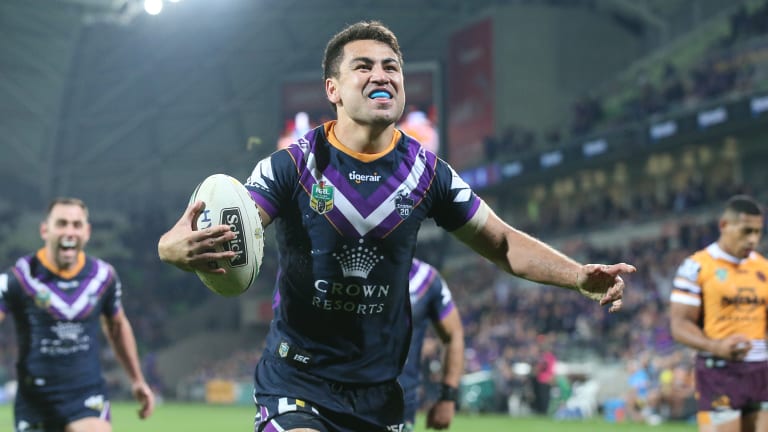 Jahrome Hughes has been in good touch for the Storm.

Jacks was unlucky to make way but Bellamy believes Hughes has the natural football skills to make the halfback role his own, he also doesn’t have to fill as much of a playmaking role as hooker Cameron Smith and five-eighth Cameron Munster control so much of the ball.

The top of the ladder Storm take on Canberra Raiders at AAMI Park on Saturday night and Bellamy was asked on Friday whether the halfback role was Hughes’ to lose.

“It probably is now,” he said.

“When Billy didn’t play for a long period of time, Jahrome came in and did a great job at fullback so we just thought he deserved to stay in the team.

“Sometimes you don’t get the opportunity to leave them in the team but with the halfback position we thought he was the best man for the job.

“That was a tough decision. Ryley has played a lot of solid footy for us and Brodie came back in and played two really good games during Origin, but Jahrome was up in our top three or four players for those three or four weeks so we thought he deserved to stay there.”

Hughes had a try assist last week, setting up Will Chambers, and he performed solidly at the defensive end. Bellamy expects he will make some improvements to his kicking and partnerships with edge players such as Felise Kaufusi.

Bellamy admits he didn’t have Hughes high on his list of halfbacks at the start of 2018, with Croft or Jacks expected to lead the side.

“Fullback is his best spot but we also saw him as someone who can play in the centres or on the wing if he had to.

“He is a real smart footy player, he picks things up quickly and he has a lot of natural ability speed wise and game-sense wise.

“We think he could handle anywhere in the backs.”

Halfback has always been a pivotal role in sides competing for the premiership and Bellamy said that hadn’t changed, but this year the Storm have the good fortune of having star playmakers Smith, Munster and Slater who lead in that area.

“We think Jahrome fits in there OK,” Bellamy said.

“There are some things he has learned and things he is still learning about halfback play at the moment. He is getting some help off our No.1 [Slater] and No.9 [Smith] and the people around him.

“He has two Origin players outside of him in Fuse [Kaufusi] and Chambers as well so he is a smart guy and picks things up quickly.”

The Storm sit on top of a congested ladder with the top-eight race the closest it has been since 1999, with only four points separating first and eighth place.

The Raiders sit outside the eight so will be desperate to win and keep their hopes of chasing a finals spot alive.

The Storm have won seven successive games despite having a number of key players involved in State of Origin. Bellamy admits that number of wins has surprised him as much as anyone else.

“St George were the standout team in the first half of the season, Souths then had a run on but we are very happy with where we are at the moment,” he said.

“We did a really good job during Origin – while we didn’t execute like we would have in different parts of games our effort was always right up there and that is the main reason why we are where we are.

“It’s been a topsy-turvy season for everyone and there will be more twists and turns before the season finishes.”

The Storm play the Raiders at AAMI Park on Saturday at 7.35pm.