When Craig Bellamy stood in front of a domestic airline check-in counter midway through the year,  Melbourne Storm powerbrokers watched their televisions and almost resigned themselves to losing the best coach the game has got.

Bellamy was vacant, his gaze distant. He spoke in hushed tones, almost embarrassed to be fielding questions from reporters of such a nature. 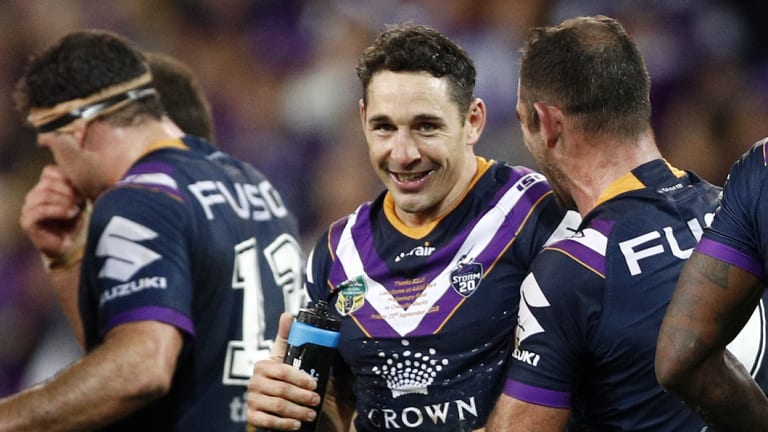 The news had just broken the Broncos wanted – and had met – with the NRL's pre-eminent coach to replace Wayne Bennett. Bellamy's body language suggested his bags might have already been on the carousel to Brisbane. This year, it appeared outwardly, would be his last in charge of the NRL's most dominant force for a decade.

History says Bellamy wavered for a few weeks, eventually signing for a further three years to stay in Melbourne. History might also say he's about to chalk up his greatest achievement in more than 15 years at the helm of the Storm, too.

Teams just don't win competitions in back-to-back years these days. The salary cap eventually squeezes the life out of you and even if you can remain a premiership force, it's proved nigh on impossible to win it all in consecutive years.

Maybe, that was, until now.

There's little doubt for all the master coach has achieved in his career, Bellamy's standing on the precipice of perhaps his most special day.

Granted, there's always been the staple Cameron Smith and Billy Slater names on so many teamsheets, a luxury for any coach. Both were brilliant in a 22-6 preliminary final mauling of old foes Cronulla on Friday night, but this year has been different.

Cooper Cronk left for Sydney after last year's title and left a gaping hole in the impenetrable Storm beast, which has just kept on relentlessly chugging. 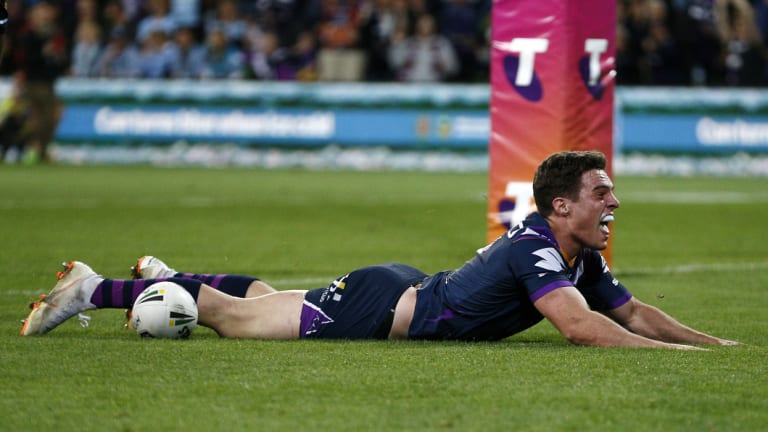 Success story: Brodie Croft scores after a Billy Slater assist as the Storm racked up a huge lead in the first half.

For a large part of the year, Cronk's coveted No.7 has been like the Rubik's Cube where that last piece won't quite go into place. Bellamy's tried different pieces – three in fact, Brodie Croft, Ryley Jacks and Jahrome Hughes – at different stages. Everything else around them has seemed to fit so snugly.

He's stuck with Croft when it mattered. Like most things Bellamy does, it's been a masterstroke.

Croft was there when when Slater glued himself to Felise Kaufusi's hip and the halfback registered the first try against the Sharks, who talked a good game but had run out of it at the same time they lost key men Paul Gallen, Wade Graham and Josh Dugan.

Speaking of losses, what price Melbourne losing Slater for the game that was supposed to be his farewell? Electrifying as always in his last ever Melbourne match, his sleep would have been limited on Friday night.

He saves just as many tries as he scores, but one screeching effort in cover where he barrelled Sosaia Feki into touch in the first half will have everyone reviewing the match review committee on Saturday afternoon. 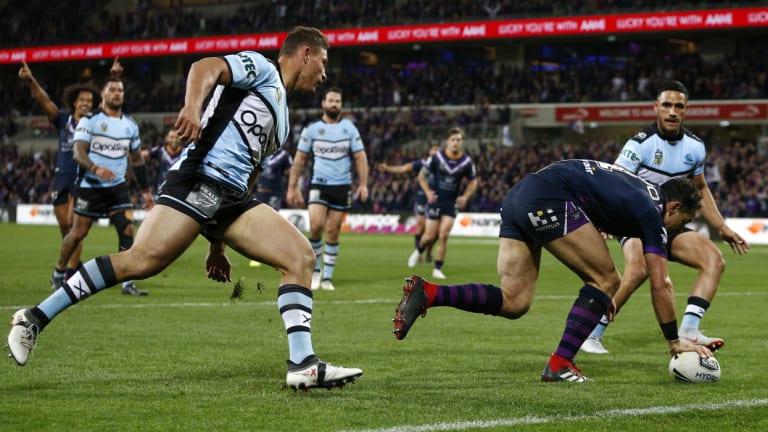 Slick: Billy Slater scores one of his two tries against an undermanned Sharks.

Slater was penalised for a shoulder charge, the scourge of the NRL charge collators in recent years. Bellamy holds his breath, aware of what happened when Smith missed a grand final in 2008.

Otherwise, Slater scored twice and most of which he touched turned to gold. His second try, moments before half-time off a deft Smith kick, summed up the night. In the back play, Andrew Fifita grappled with Kenny Bromwich, oblivious to what was happening behind him.

Bellamy's oblivious to what happened behind him a few months ago too. He's got more history to create.