Criticism water off a champion Cat's back

Gary Ablett says criticism of his game no longer gets to him in the way it used to, as the two-time Brownlow Medalist eyes his 200th game for Geelong against North Melbourne on Saturday.

In doing so, Ablett will become the first father-son player to play 200 games for the Cats.

Coming off the back of two quieter displays against Essendon and Carlton, Ablett was back to his scintillating best against his former side Gold Coast, collecting 37 disposals and kicking three goals in a best-on-ground performance. 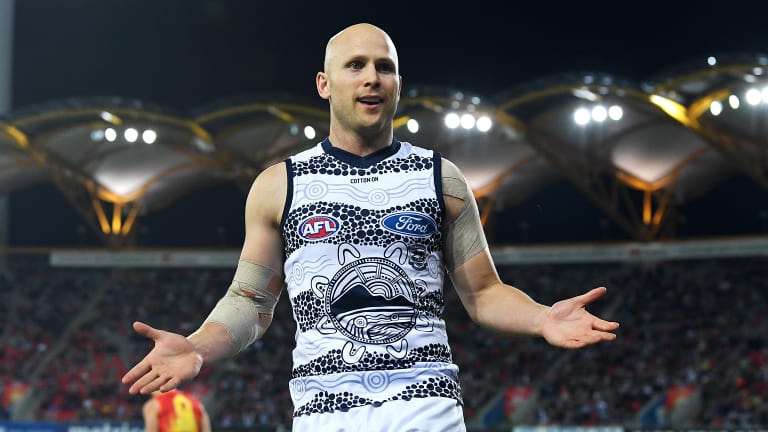 But Ablett said he no longer rides the rollercoaster of emotion when it comes to the weekly analysis of his games.

"Not really. I probably would have read more into it five years ago but I think you just get to the stage where you realise you’re in an industry where people are going to have their opinion and I think for me it’s focusing on what I can control," he said.

"I was disappointed in my game against Essendon whereas,  against Carlton I thought my game was OK, I played my role for the team."

Ablett will play his fifth consecutive game for the first time in a year, after persistent hamstring problems hampered the latter stages of his Gold Coast career and once again at the start of his second stint at the Cattery.

But the 309-gamer is now confident the issues are now behind him.

"The plan is to finish off the season and play every game but that’s something the physios and doctors are constantly talking about," Ablett said.

"We obviously play a contact sport where injuries are part of the game.

"It’s something that I've got to say on top of, I’ve been spending plenty of time in the gym just making sure that I’m keeping the legs nice and strong.

"I’ve had no issues with it over the last month or so.

"Players are going to get their niggles at times, I don’t think there’s too many players that (go into games) at 100 percent, we all play with niggles but that will be a decision we make futher down the track."

The milestone man has achieved just about every individual honour there is in football.

On top of his two Brownlow Medals and two premiership medallions, he's also a six-time best-and-fairest winner (two at Geelong and four at Gold Coast) and an eight-time All Australian.

But the humble champion takes it all in his stride.

"When I was first drafted, for me it was just about playing a game of AFL football," Ablett reflected.

"And it probably took me two or three years to really start to believe that I was good enough to play at the top level.

"So I think for me to be able to look back on those years and what I've been able to achieve over my 17 years in the game, it is pretty special."