If Luka Modric, Ivan Perisic, Mario Mandzukic or Ivan Rakitic can hit the target and drive Croatia to a World Cup final victory over France in the early hours of Monday morning the cheers in Australia may rival the noise of the crowd in Moscow's Luzhniki Stadium or the hordes of stay at home Croatian supporters who will be partying in Zagreb, Split and Dubrovnik as the match takes place.

It is quite extraordinary for a nation like Croatia, with a population of 4 million people, a small national league and dysfunctional football set up to produce stars of such calibre who play for Real Madrid, Inter Milan, Juventus and Barcelona respectively. 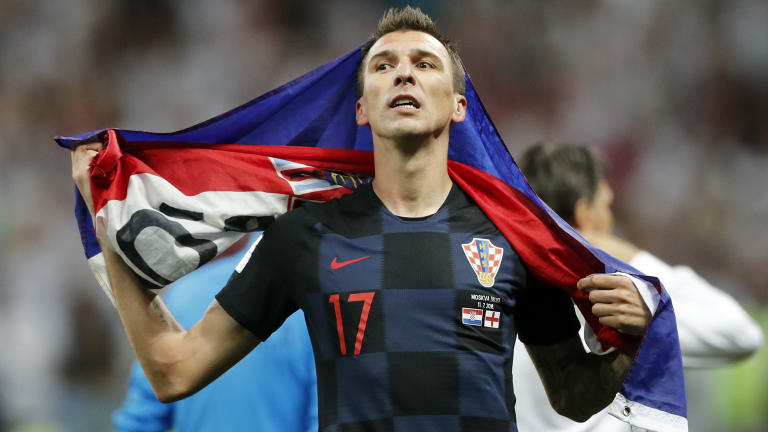 It is another thing entirely for such a new country with such a small playing base to reach the pinnacle of global sport, defying some of the giants of world soccer (Argentina and England) along the way.

But even more noteworthy than their on-field achievement is the galvanising effect the team's performances in Russia have had not just on the population at home but in the Croatian diaspora scattered world wide.

This is a country that wasn't even recognised 30 years ago, only gaining official status in the aftermath of the horrific Balkan wars which brought death and tragedy to hundreds of thousands as the former Yugoslavia broke up in violent and tragic fashion.

So many of its people, escaping the Communist leadership of Marshall Tito and the post war Russian domination of Eastern Europe, fled their native land in search of a freer life and better opportunity for their families. 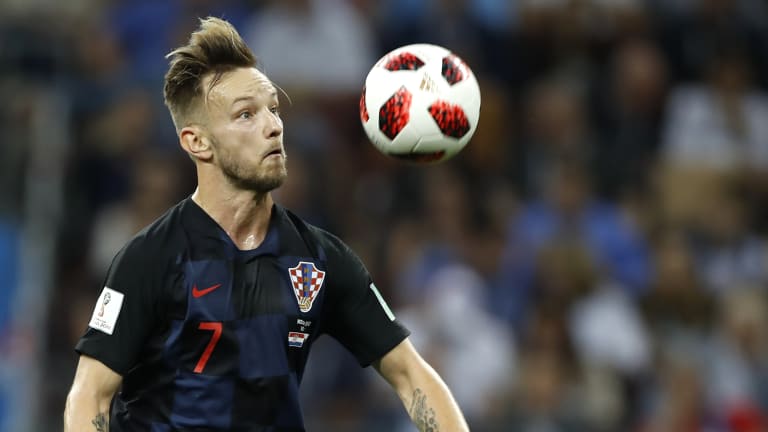 Midfield maestro: Barcelona’s Ivan Rakitic is one of Croatia’s stars.

Many, of course, came to Australia, which is why the noise in community clubs and bars, cafes and restaurants opening early for the match will be deafening should Croatia pull off the biggest upset of all on Monday and defeat the powerhouse that is France to take the title.

Australian soccer has been dominated by immigrants. After the British introduced the game it was the Greeks and Italians who helped develop the sport in this country, the post-war wave of immigration seeing the creation of well supported and successful clubs in all the capital cities.
The game might have flown under the radar in the 1950s and 1960s, but it was there, establishing a foothold.

But it is arguable that no group of immigrants has contributed more to the cause of Australian soccer, especially in the last 30 years, than the Croatian community – which is why, for them, this clash with the footballing aristocrats of Les Bleus is so important.

Think about the great names of the Australian game in recent years and so many have had Croatian antecedents: Mark Bosnich, the flamboyant goalkeeper; Ned Zelic, the elegant defender; Tony Popovic, the hard as nails centre back; Josip Skoko, the skilful and industrious midfielder; Mark Viduka, arguably the best player this country has ever produced, are just the first handful that spring to mind.

The ties between the Croatian community and Australia run very deep because for Croats the game itself is an expression of identity – both individual and collective.

Football gave so many young Croatian men a link to a new community in a new world when they arrived in Australia.

They may have only known a few people, but there were plenty of clubs – the best known being Melbourne Knights in Sunshine, Victoria, and Sydney United, in western Sydney – where they could go to play, if good enough, or watch and make friends and gain an introduction to their new world.

Many met wives and partners, found jobs and developed careers through connections made at such clubs.

Their children followed suit, playing on Saturday and Sunday mornings, honing their skills, understanding not just their place in the world into which they were born but learning the culture of the community from which their parents came.

In a broader sense, football has given Croatians, both those still in southern Europe and those of the diaspora, a broader sense of national identity, burnishing Croatia's image on the global sporting stage.

Croatia's first essay in a major tournament was in the 1996 European championships, where they made the quarter finals. In 1998 this nation, barely a few years old, made the World Cup semi finals – coincidentally losing to France after taking the lead.

Much has been made over the years of the duality of identity that Croatian footballers have struggled with – something that was never more exemplified than 12 years ago when Croatia and Australia were drawn to play each other in the 2006 World Cup in Germany.

The Socceroos fielded players like Viduka and Popovic, Jason Culina (from another famous Australian-Croatian footballing family) and goalkeeper Zeljko Kalac, all men whose routes were in the Balkans.

But the Croats also shared the link: the men in red and white checks on that famous night in Stuttgart when the Socceroos progressed at Croatia's expense had the Canberra born and raised Josip Simunic as their defensive stalwart, while two other Australians, goalkeeper Joey Didulica and defender Ante Seric, were in the Croatian squad.

Didulica's elder brother John, himself a former professional in Australia whose career was cut short by injury, these days runs the players union, the PFA.

Having worked for the FFA (as a lawyer), Melbourne City (in charge of player recruitment and list management) and for the union, Didulica, who grew up in the Croatian soccer hotbed of Geelong, is perfectly placed to spell out just how important football is to this country's Croatian community, and what it meant to his generation growing up as second generation immigrants.

"Plenty of people flying to Russia or to Zagreb or Split to soak up the atmosphere, it's incredible what they have achieved.

"I was talking to someone about the links back to the mother country, if you want to call it that, and there is the language, the church and football clubs.

"In my case as a youngster the church and football both clashed on Sunday mornings, and football took precedence pretty quickly," he recalls.

"Football is central to who we are, it reflects the dualism of our lives and its manifested more through the national football team, more than it is through religion, language or culture," he explains.

"Football for many of us became a medium of communication with the older generations, many of whom did not have the English language skills.

"Football was one of the few things I could talk to my father about on equal terms. It was the same for many.

"There was a fairly uniform lifestyle for the first generation Croatian immigrant. You played for your local football team, your dad drove you there and you went to church (or lessons) after … it was a big part of being able to express your Croatian heritage during a time when it wasn't always easy to do that."

It was the creation of the national team just over 20 years ago that gave Croatians everywhere the chance to experience a shared dream.

"We didn't have a team until the mid-1990s, but once it was established it became a very potent symbol for all Croatians around the world allowing us to celebrate our national status.

"We all enjoyed the highs of 1998 and we are experiencing something similar now. We grew up with our hearts set on playing for Australia really as for much of the time Croatia wasn't a country.

"Some boys did opt to play for Croatia (later) and that obviously was their choice. Josip Simunic had a wonderful career and played more than 100 times for Croatia."

Didulica's brother Joe was another, although his choice was made out of frustration more than anything: Mark Schwarzer and Zeljko Kalac were the established first choice goalkeepers and he felt he would never get an opportunity to play at a major tournament, so when Croatia approached him ahead of the 2004 European Championships he opted to play for the country of his parent's birth.

It is a choice many players have made before and since, with Australia itself benefiting as recently as this World Cup when Daniel Arzani chose to play for the Socceroos rather than Iran, where he was born.

The Croatian influence on the local game has gone beyond just the players, however, as Didulica points out.

"The first wave were players who influenced the local competition and then inspired younger players coming through. 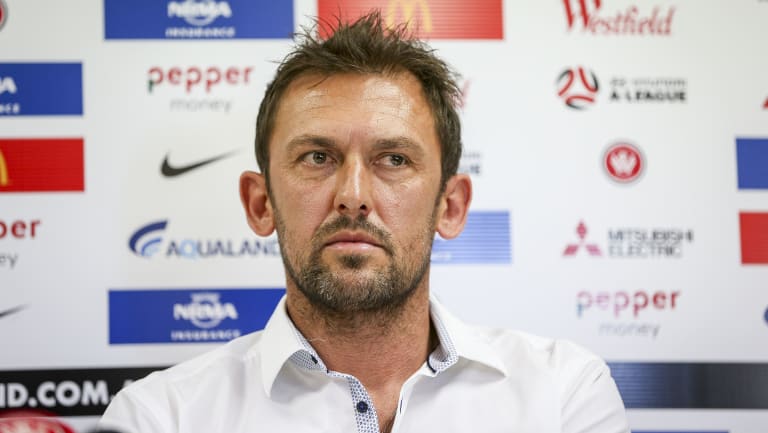 "Then they became coaches (Tony Popovic, who led Western Sydney to triumph in the Asian Champions League, Mark Rudan, now in charge at Wellington Phoenix, Ante Milicic, for years Ange Postecoglou's number two with the Socceroos) and now they are starting to become administrators and also commentators and involved in the media (the Zelic siblings, Ned and Lucy, Mark Bosnich and German-based coach and analyst David Zdrillic).

"It just reflects the importance of football in Croatian life and in the various communities in so many cities, towns and states in Australia.

"In Melbourne there are clubs like Melbourne Knights, North Geelong, St Albans, Dandenong City and various feeder clubs. It's the same in Sydney with Sydney United and lots of other clubs in that network around New South Wales. You see it also in Perth and Adelaide as well. Socceroos coach Graham Arnold came through that system at Sydney Croatia, for example, when he was a young striker, so it's not just Croatian kids who benefit.

"The Australian Croatian soccer tournament is massive every year. There are about 60 clubs which take part and its a growing and very vibrant competition."

So the links run deep – but Didulica does not want to see the Australian game modelled on the Croatian set up.

"Its governance is somewhere between criminal self interest and eastern bloc totalitarianism and it's at best chaotic. But the best players and coaches seem to be able to rise above it."

If they do see off Les Bleus on Monday there will be no higher point to which they can rise.