‘I am still waiting for my Instagram post that I am playing for Tonga from the club”.

And, until Andrew Fifita does, he will be in his trailer! *hairflick. 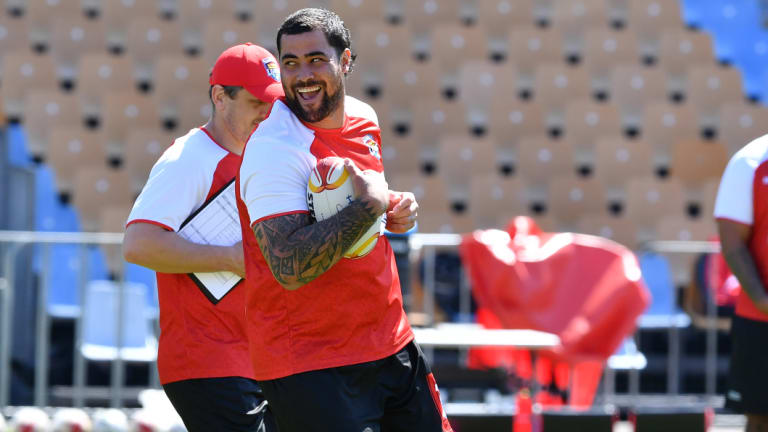 Andrew Fifita … Someone needs to have a word to the Sharks wrecking ball before he wrecks himself.Credit:NRL Photos

If any comment neatly captured the self-absorbed modern sportsperson, it was this from the Cronulla prop in Auckland earlier this week before the historic first international between the Kangaroos and Tonga.

Fifita was last month named Dally M prop of the year and was the star of their 2016 premiership, but some at Cronulla are genuinely starting to wonder if he’s worth the trouble.

Coach Shane Flanagan has skilfully got the best he can out of Fifita, conscious of Fifita’s well-publicised issues with his mental health. But how much longer can he put up with the sideshow?

It is coming to a point when Fifita needs to stop whinging about his own club and the media and simply be the 120-kilogram, left-foot stepping wrecking ball he was born to be.

Dally Ms and man-of-the-match performances during the season are one thing. But it’s the grand occasion that matters most. He cost the Sharks any chance of beating the Storm in the preliminary final when he lost his head in the final two minutes of the first half.

First, he gave away a weak penalty with a crusher tackle on Melbourne prop Jesse Bromwich – his third of the match to that point. Then, from the next set, he ran out of the line, took out Bromwich and got in a fight. His absence from the defensive line allowed Billy Slater to latch onto a grubber kick from Cameron Smith and score. At 20-0, the match was over.

Now, think back to State of Origin last year. Fifita was stunning in the first game, using all of his many skills to inspire the Blues to victory. Then he signed a fat contract extension with the Sharks and was barely sighted in the next two Origins.

Doubtless, the wrecking ball will pull on the red Tongan jersey tomorrow and swing right through the Australian forward pack, leaving defenders in his wake.

And then, afterwards, he will no doubt say something silly, insult someone and play the victim. He should be so much more than a cheap headline, and he desperately needs someone to explain how.

A few years ago, Sharks coach Ricky Stuart sent Paul Gallen to Ron Massey to deliver some home truths about being a so-called “grubby” player. Stuart knew Gallen could be so much more.

Gallen knocked on the door. Massey opened it.

By the time Gallen left, his ears still ringing, he was a new player. Massey has left us but Flanagan could do worse than find a figure of that standing to tell Fifita about how special and respected he could be.

Hayne plane won't be landing at the Dragons

The Dragons are bemused at reports they're set to offer the Eels star a contract for next season, calling it out for what it is: his management trying to force Parramatta into offering him a serious deal.

A brief discussion took place but the Dragons scoffed at the asking price. That was it. 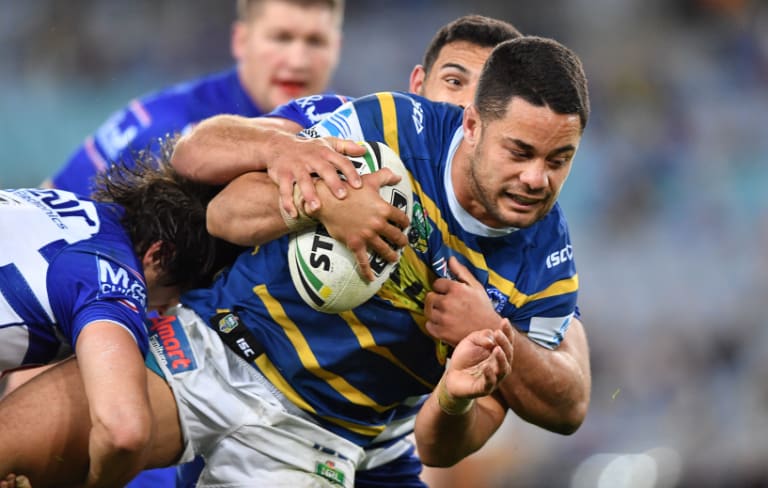 In limbo: Jarryd Hayne is yet to re-sign with the Eels.Credit:NRL Photos

Expect more clubs to be touted as possible destinations for Hayne.

The Eels need to move players to find the money he's looking for and they're having trouble getting anyone to leave.

Thing is, Hayne finished the season very strongly. When he’s in the mood, the Hayne Plane can still fly.

So reads the maroon-and-white banner outside the iconic Brookvale Hotel on Pittwater Road, which wants Geoff Toovey back as Manly coach — not Des Hasler. 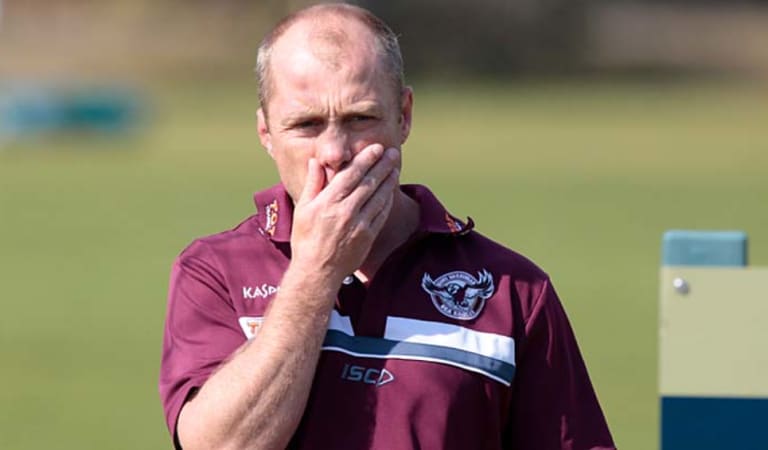 “We at the Brookvale Hotel strongly believe that Manly should ‘Bring Back Tooves’ as coach of the Sea Eagles, arguably the toughest man to ever play the game of rugby league,” the pub’s website reads. “He coached the club for four seasons, making it to the finals three times and a grand final appearance in 2013, with a winning strike rate of 58 per cent. Manly needs to be a force once more and to be trained by one of its own!”

Not everyone at the Sea Eagles agrees, including some of the current playing squad who refuse to drink at the pub because they don’t share the sentiment of "bringing back Tooves".

Of all the indicators that The Everest was a raging success, perhaps the most telling came out of Melbourne with Racing Victoria ordering the Herald-Sun to confine its coverage to less than a quarter of a page.

Racing NSW boss Peter V’landys wanted to be “disrupt” the industry and he’s certainly done that: he’s got Melbourne worried.

For an event that was apparently “on the nose” with “Sydney’s social scene” because of the Opera House barrier draw controversy, it certainly seemed quite popular.

Meanwhile, the punters climbed in. One corporate bookie reported a 63 per cent increase in turnover for the meeting. Remember: it was a rain-affected track.

And here’s a quirky figure: the meeting is now only second to the Bledisloe Cup for hire car usage for a sporting event. Bring on the light rail.

As for the race, it was a tough and tumble affair, not dissimilar to the Golden Slipper. With $13 million in prizemoney on offer, you can understand the excitement.

Spare a thought for larger-than-life Kings Cross character Max Whitby, who was a slot owner and had Graff.

That, as they say in the classics, is racing.

The imbroglio between Parramatta and the operators of the Western Sydney Stadium is real and concerning.

Eels chief executive Bernie Gurr has been accused by some of using the announcement next week of the NRL draw to squeeze out a better deal to use the shiny new stadium, which will be completed early next year.

Not so: he’s been trying to sort a deal out since last year.

As we understand it, the Eels were infuriated when Venues Live, which manages the stadium, threatened to open it with a Waratahs match.

It’s hardly the right way to treat your main tenant — along with the Wanderers — for the next 25 years and beyond.

The NBA season is under way. We speak to ESPN analysts Jeff Van Gundy and Mark Jackson about what lies ahead …

The game here is growing because of the likes of Ben Simmons, Joe Ingles and Dante Exum. Thoughts on their impact in the NBA?

JACKSON: Their impact has been outstanding. Ben’s a generational talent. He came with expectations from day one and hasn’t disappointed. He had an outstanding year last year and he’s going to build on it. Exum is about being healthy. I expect a great season from him being healthy and whole. Tremendous size, tremendous athletic ability. With Ingles, he just knows how to play. Dangerous player. Smart player. I remember him starting with the Clippers and now in Utah. That’s a heck of a basketball team. I really think Utah and Philadelphia are more than capable of advancing in the play-offs. They’re that good.

VAN GUNDY: Exum’s time in the NBA has been so choppy due to injury. Hopefully, this is the year he can be healthy and have a productive year. I love Joe Ingles. He’s a tremendous glue player, terrific shooter, passer, defender. Ben Simmons: everyone wants to focus on what he can’t do, which is trying to rush him into being a range shooter. Simmons and Philly have done a good job in focusing on what he does great versus what he doesn’t do as well. And I think that’s hard to do with all the critics you get as a player. 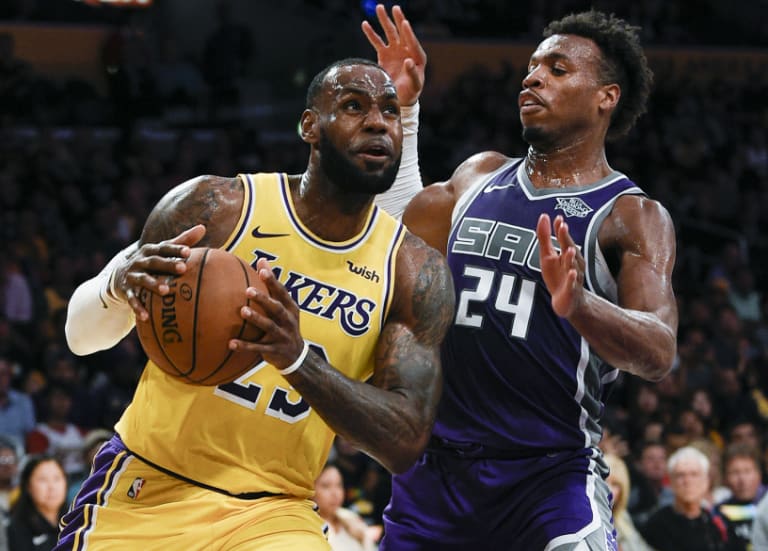 All the way with LBJ? LeBron James shows off his new colours in the pre-season.Credit:AP

What does LeBron James need to do with the Lakers for his move to be considered a success?

JACKSON: It’s about the improvement that the Lakers show. The goal is to win a championship and, when you have the best player in the world, that’s the goal. Is it realistic? I’m not sure. But to show improvement, to show growth … It’s a win already because the Lakers are once again relevant. Now it’s about developing winning habits and progressing towards that march.

Can anyone beat Golden State?

VAN GUNDY: If you said I can take the field or I can bet Golden State, I would bet Golden State. I thought Houston would get them and I still think they would have if Chris Paul hadn’t gotten hurt. But, this year, if Golden State is into it, they’re by far the best team and will win.

JACKSON: To answer your second question first, Golden State is the clear-cut favourite.

Watch the opening weekend of the NBA season live on ESPN

“Who said slavery is over?” — Yes, Sunrise host David Koch went there when talking about Usain Bolt being offered a two-year deal with Maltese club Valletta FC. He then dug a deeper hole by trying to defend the remark. 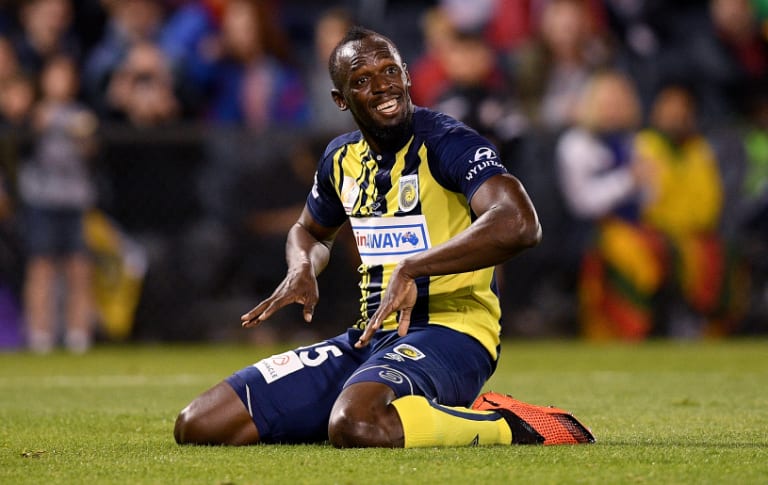 Usain Bolt: David Koch made a goose of himself when discussing the Jamaican’s potential move to Malta.Credit:AAP

Come here and give us a big hug, Prince Harry. His Royal Highness came up with the idea of the Invictus Games four years ago for wounded, sick and injured service personnel and it’s been a raging success. This year’s event gets under way in Sydney on Saturday.

The Australian men’s and women’s teams are having a good old laugh over a story in the New Zealand Herald about them closing down the bar on the Waiheke Island Ferry, making comparisons to David Boon’s 52 cans flying from Sydney-London. Integrity Unit investigator Karyn Murphy was on board.

It’s a big weekend for …

Sydney FC and Western Sydney Wanderers, who both have tough away matches to start their A-League season against Adelaide and Perth respectively.

It’s an even bigger weekend for …