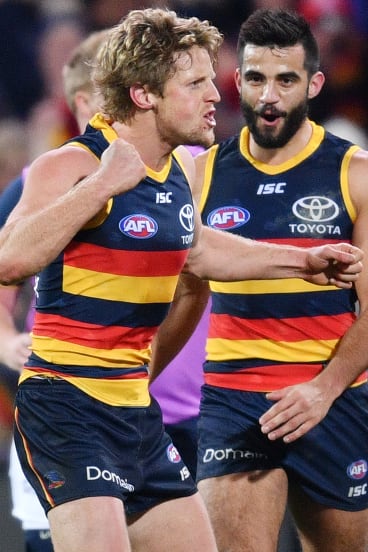 The Adelaide Crows won a thrilling fight to stay in the finals race – but could be without two of their biggest stars next week following their knockout blows against Geelong rivals at Adelaide Oval last night.

In the space of a few minutes in an ugly first quarter, Cats star Joel Selwood was felled behind play in what appeared to be a strike from Bryce Gibbs, who was alongside Riley Knight. Crows captain Taylor Walker was reported for head-high contact on Zach Tuohy.

Both Cats seemed stunned by the heavy knocks, but resumed on the field soon after – Tuohy because of the blood rule while Selwood was sore but emerged as one of their best. And they copped more hard physical attention as the Crows showed their mean streak in their desperate hour of need.

Geelong coach Chris Scott seemed far from impressed. He stared-down the field umpires as he strutted onto the field at the quarter-time break.

Given the precariousness of the result, and maybe a reminder for the Cats that the Crows beat them in a preliminary final here last year, this was always going to be a hard contest, but the ferocity of the Crows was surprising.

The loss leaves the Cats teetering on the edge of the top eight, and they play big contender Melbourne at GMHBA Stadium next Saturday night.

The Crows were fired up, largely following the re-signing of the inspirational Rory Sloane, who was sensational. Finishing with his head bandaged, he was back to his ball-hungry and fearless self. He lifted those around him and if he wasn’t saving goals with fierce tackles, he was setting them up for teammates.

A special moment came late in the third quarter when he goaled from 48 metres to the roar of the crowd, with every teammate rushing up to pat him on the back.

Adelaide sorely missed key defender Daniel Talia (foot) who was replaced in the selected side by Alex Heath, and while the former cricketer did some good things, he struggled. Hurting the Crows more was the confidence-zapped Kyle Hartigan who had another nightmare performance, this time against Tom Hawkins.

With this in mind, keeping scoring control of the Cats was a terrific effort, and the work by the vastly improved Wayne Milera and Rory Laird was superb.

For the most part, the Crows also struggled to break the defensive lines. Interestingly, Adelaide coach Don Pyke had Gibbs and Sloane switching at full forward and on the ball. It had an impact, not with goals but on the quality of their forward pressure. 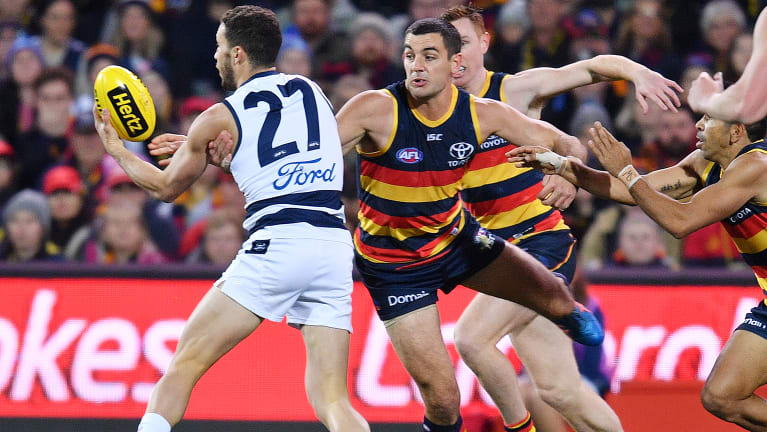 Patrick Dangerfield also had a huge positive influence on the Cats with his typical workrate. Watching his bone-crunching encounters with his great mate Sloane – especially their class – was a feature.

The Little Master Gary Ablett has had his critics of late, but again his quality lay could not be faltered. And don’t dare doubt his team play – it was superb. He didn’t star, but his performance was important. 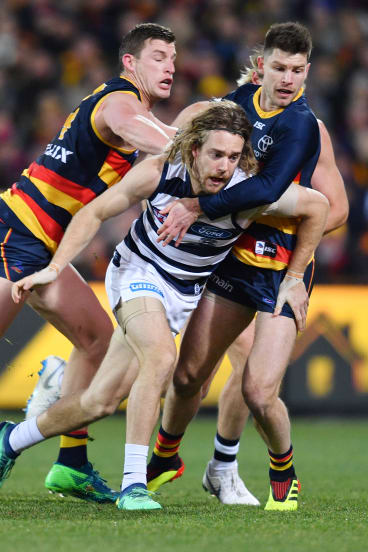 It was a game where the momentum kept changing. Both teams had a spate of goals through better ball control and slick movement under pressure, but fell away with turnovers. A vital part of this game came early in the third quarter when the Cats got within two points. Josh Jenkins set the Crows up to lead by 20, only to see Geelong respond again.

Walker struggled after that first quarter report, but Jenkins really stood up under the pressure and gave the Crows a big target. Tom Lynch was back to his goalkicking and creative best, while Eddie Betts was a good contributor in his return from injury. Rory Atkins, who was sent to the reserves for poor form, came back and played very well.

Geelong’s game featured their big names, especially Dangerfield and Ablett, but again there were immensely encouraging performances by newcomers Tim Kelly and Quinton Narkle who also added a lot of bite and other special qualities to the overall make-up.

INJURIES: Adelaide: D. Talia (foot) replaced in selcted side by A. Keath.