The Crusaders have survived a scare from the last-placed Sunwolves to win a Super Rugby match spoiled by some freakish Christchurch weather.

The defending champions emerged 33-11 winners on Saturday in Christchurch, finally quelling their Japanese opponents with two quick tries midway through the second half.

Until then, the winless Sunwolves had threatened a monumental upset, trailing 14-11 nearing the final quarter. 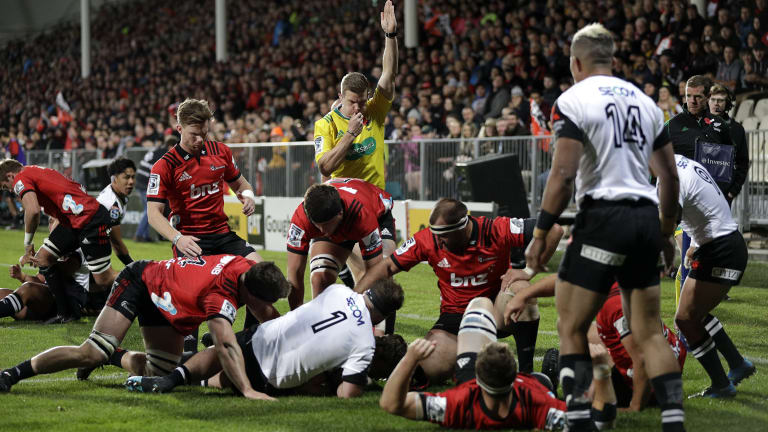 The Crusaders' fluent game was knocked off its stride by the tenacious visitors, along with a dramatic storm which struck the game in the first half.

Hail, thunder and lightning prompted some commentators to suggest that the match be abandoned.

The weather cleared but a slippery surface meant the game was as a patchy spectacle.

A repeat of the 50-3 Crusaders' win when the teams met last year appeared on the cards as they powered 14-0 ahead inside nine minutes.

Tries to Ryan Crotty and Matt Todd were followed by a Sunwolves response from Michael Little before the foul weather arrived.

The conditions proved a leveller as a Sunwolves team who had lost all eight matches this season closed the deficit after twin penalty goals to Hayden Parker.

The Crusaders shed their propensity to turn over possession or make basic errors.

Crotty bagged his second and winger Manasa Mataele was over soon afterwards, with both tries created by clever passes from Tim Bateman.

They climb to second on the overall table, one point behind the leading Lions, who have a game in hand.

One dampener for the Crusaders was what appeared to be serious leg injuries to Ben Funnell and Tom Sanders, which forced both players off in the first half.

Prop Franks was a powerful figure for 50 minutes, but Dagg endured a quiet evening on the right wing.

The Crusaders face a trio of trans-Tasman opponents, starting with the Brumbies next week in Canberra.