Major League Baseball and the Chicago Cubs moved to distance themselves from one of their own Tuesday, after the news outlet Splinter published a cache of racist emails sent and received by Joe Ricketts, the billionaire whose family owns the Chicago Cubs and Wrigley Field.

Many of the published emails, sent between 2009 to 2013, focused on a fear of Muslims and contained conspiracy theories about former President Barack Obama. The false assertion that Obama, who identifies as Protestant, was Muslim and born outside the United States were prevalent in right-wing politics during his presidency.

In one email, Ricketts wrote to somebody identified only as S.V. that “Christians and Jews can have a mutual respect for each other to create a civil society,” but “Islam cannot do that.” He went on to write that, “we cannot ever let Islam become a large part of our society,” and that “Muslims are naturally my (our) enemy.”

Major League Baseball released a statement condemning the emails but seemingly tried to absolve Ricketts of some responsibility.

“While many of the emails were not written by Mr. Ricketts, the content is extremely offensive and completely at odds with the values and principles of Major League Baseball,” the statement said.

In a statement on his website, Ricketts apologized for his emails. “I deeply regret and apologize for some of the exchanges I had in my emails,” he wrote. “Sometimes I received emails that I should have condemned. Other times I’ve said things that don’t reflect my value system. I strongly believe that bigoted ideas are wrong.”

Tom Ricketts, chairman of the Cubs, denounced his father’s emails in a statement and tried to distance the Cubs from him.

“We are aware of the racially insensitive emails in my father’s account that were published by an online media outlet,” the statement read. “Let me be clear: The language and views expressed in those emails have no place in our society.”

Tom Ricketts continued: “My father is not involved with the operation of the Chicago Cubs in any way.” 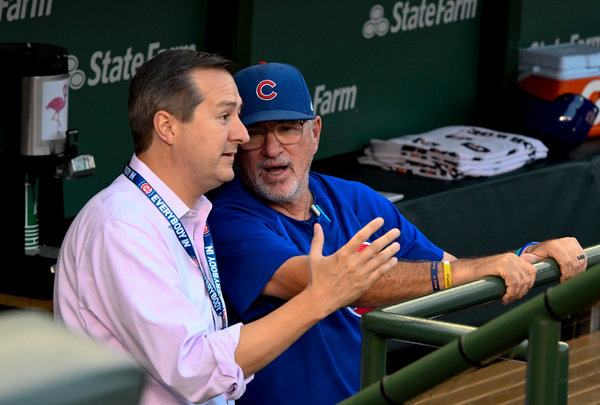 The Cubs are owned through a trust the Ricketts family controls.

Joe Ricketts, who earned his fortune as the founder and chairman of brokerage TD Ameritrade, and his wife Marlene, sold $403 million of stock to finance the purchase.

Ricketts’s four children run the Cubs day to day. Tom Ricketts is the chairman; on the board of directors are Pete Ricketts, the Republican governor of Nebraska; Todd Ricketts, finance chairman of the Republican National Committee; and Laura Ricketts, who was a major bundler for the presidential campaigns of Obama and former Secretary of State Hillary Clinton.

The Ricketts family purchased a 95 percent stake in the Cubs and Wrigley Field from the Tribune Company in 2009.

In other sports leagues, offensive behavior has led to owners selling their franchises. Donald Sterling was forced to sell the Los Angeles Clippers of the N.B.A. after a tape of him making racist comments became public. Sterling was banned from the league for life.

Jerry Richardson, the owner of the N.F.L.’s Carolina Panthers, announced he would sell his team shortly after a report came out that revealed he had been accused of sexually harassing employees and making racist comments.

In September, the N.B.A. fined Mark Cuban, the owner of the Dallas Mavericks, for the way he and team officials handled sexual harassment complaints.

For Joe Ricketts, this is not the first time his political activities have harmed the Cubs. He is a major funder of conservative causes and gave $1 million to a political action committee supporting Donald Trump during his presidential campaign.

In 2012, The New York Times reported that Joe Ricketts was considering spending $10 million on a campaign that would attack Obama’s connection to Reverend Jeremiah Wright, a former spiritual adviser who Obama denounced during the 2008 presidential campaign. At the same time, the Cubs were asking Chicago Mayor Rahm Emanuel for $300 million in public money, as part of a $500 million renovation of Wrigley Field and the surrounding area.

Emanuel, who served in the White House as Obama’s chief of staff, was reportedly “livid” over the proposed campaign, and stopped talking to Cubs officials about the renovation shortly thereafter. The Ricketts family ultimately financed the renovations privately. Those renovations are ongoing.

In a statement Tuesday, Emanuel condemned the emails. “Joe Ricketts once said that I do not share his values. Truer words were never spoken,” he said. “The ignorance and intolerance he has espoused are not welcome in Chicago. I am proud not to share his bigoted opinions. Hate has no home in Chicago.”