After nights and months and years of nail-biting through late-inning disappointment, the Washington Nationals were not supposed to have to worry about their bullpen this year. For all the problems this team has had, the bullpen was not supposed to be one of them.

But Sunday, in one of the more important games of their season, when they had a chance to vanquish a first-place team and gain ground on another, that bullpen was depleted, lacking one closer, then his replacement. In a game that could lift them back into the race or send them reeling with the weight of another missed opportunity, after Max Scherzer pitched his heart out through seven scoreless innings, the Nationals needed just-recalled Koda Glover and third-string closer Ryan Madson to hold a one-run lead against the best team, by record, in the National League. Glover delivered. Madson could not, hitting two batters as he loaded the bases, then surrendering a walk-off grand slam to David Bote with two outs and two strikes in a 4-3 loss to the Chicago Cubs.

In a season of devastating defeats, this is the one that will leave the Nationals bleeding longest.

They are playing more like a playoff team now, doing the little things more frequently – if not perfectly. Back in the second inning, when Ryan Zimmerman walked and Daniel Murphy singled him to third, Mark Reynolds hit a sacrifice fly to score the run. The Nationals struggled to manufacture runs earlier this season when Zimmerman, Murphy and others were either slumping or injured. They are creating runs much more reliably now.

Reynolds was in Sunday night's starting lineup because Anthony Rendon was not, still nursing a left wrist contusion he suffered when he was hit by a pitch there Friday. Rendon entered as a defensive replacement in the ninth inning, and Manager Dave Martinez said he hopes he will be ready to return to the lineup Monday at St. Louis, but that this team had a chance to win a series at Wrigley Field without Rendon in the lineup against two of the more accomplished left-handed pitchers in the game qualified as remarkable.

Scherzer has been one of the Nationals' few stars that has played to his potential all season, an indispensable piece – a man with an evolving MVP candidacy. The right-hander struck out four batters in the first two innings Sunday and seven in the first three. He worked ahead of a Cubs lineup that can make that difficult because it is unafraid to jump at pitches early. 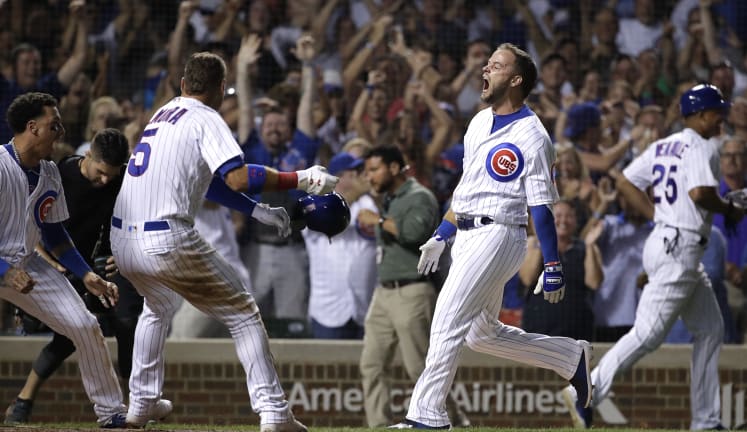 Chicago Cubs’ David Bote, right, reacts as he celebrates with teammates after hitting the game-winning grand slam during the ninth inning of a baseball game against the Washington Nationals.

His strikeout pace slowed in the middle innings. In the fourth, Ben Zobrist hit a high flyball that might have tied the score on a different kind of night or day here. But on this one, with the breeze blowing in if at all, it fell harmlessly into Bryce Harper's glove, just in front of the wall.

Meanwhile, Cubs starter Cole Hamels retired 18 straight Nationals to end his outing, continuing his reemergence as an elite starter since being traded to a contender from the Texas Rangers at the deadline.

Thanks to Scherzer's dominance, Hamels trailed for almost all of the seven innings of one-hit ball he tossed Sunday night. By the time the game hit the bottom of the seventh, then, it fit the mold of many of the 19 previous one-run games the Nationals had lost this season – games in which they grabbed an early lead that never grew, then watched it slip away late.

In so many of those games such as this, Scherzer surrendered a game-tying run late and saw an excellent day's work consumed in that mistake. Sunday, he simply refused to bend. When Albert Almora Jr. hit a two-out double in the seventh to become the Cubs' first runner in scoring position, Scherzer fell behind Kyle Schwarber and decided to intentionally walk him.

With his pitch count at 100, Scherzer faced Willson Contreras in what suddenly became a make-or-break at-bat, the kind on which games – and at this time of year, seasons – pivot. This time, Scherzer didn't break. He struck out Contreras and convulsed in some combination of relief and glee, then marched to the dugout like a man prodded with electricity. The high-fives he delivered to the first people to greet him in that dugout likely delivered a similar shock. He threw seven scoreless innings in which he allowed three hits and struck out 11. He leads all active starters with 77 career 10-strikeout games. He has 13 of them this season.

Scherzer's departure left the Nationals in the hands of their depleted and suddenly shaky bullpen, and the game in the hands of Glover, just recalled from the minor leagues and thrust into late-inning duty out of uncomfortable necessity. 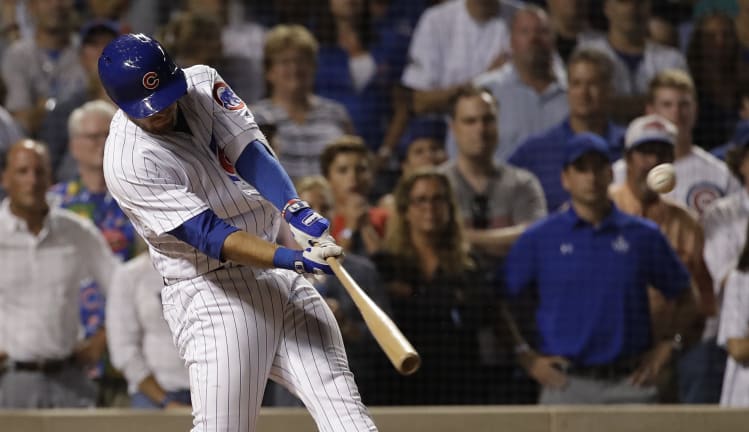 The 25-year-old allowed a leadoff single, got two outs, then surrendered a chopper to Javy Baez, who was initially ruled to have beaten Reynolds's throw across the diamond. Martinez challenged the play. After a long review, the call was overturned, saving Glover the stress of a two-on, two-out jam and getting the Nationals through the eighth.

Then, in the ninth, Zimmerman increased the margin for error with a bases-loaded single against Brandon Kintzler that brought home two. Dealing Kintzler left the Nationals with far less depth in their bullpen than they had previously. Facing him Sunday allowed them to give that depleted relief corps some help.

But it wasn't enough for Madson. He allowed a single and hit two batters, looking rattled. He got ahead of Bote 1-2. On a 2-2 pitch, Bote sent a high flyball out to dead center, leaving Matt Wieters cringing behind home plate, well aware that the Nationals' best chance to gain ground and start the run they have needed all season had flown out on that home run, into the Chicago night.