Mitchell Starc may have claimed his second 10-wicket haul in Tests with another stellar performance but Pat Cummins’ 14 wickets for the series at the ridiculous average of 7.78 has only strengthened an argument he is one of the best fast bowlers in the world.

After Australia again put a hapless Sri Lankan team to the sword, Cummins was named man of the series and Starc man of the match. 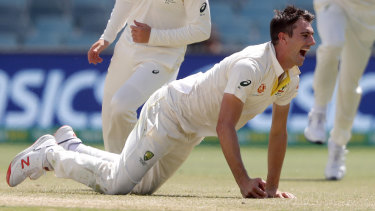 Go-to man: Pat Cummins takes a catch off his own bowling to dismiss Lahiru Thirimanne on Monday.Credit:AAP

Coming into the Canberra fixture, the pair could not have been in contrasting predicaments. Cummins had just taken 10-62 at the Gabba and was flying high, while Starc’s place in the team was being questioned following some erratic spells.

Starc’s match figures of 10-100 were statistically superior but Cummins’ 4-47 – he took 3-15 in the second innings – was yet another excellent performance that shows how important he is becoming to this team.

From 20 Tests, Cummins averages 20 with the bat and has snared 94 wickets at 22. If he manages six wickets in the first Ashes match at Edgbaston, Cummins will become the fastest Australian pace bowler to 100 Test wickets in 123 years after Charlie Turner reached the milestone in his 17th Test match.

Of all Australian bowlers, Cummins would rank equal fourth on the list with Stuart MacGill (21) and behind Turner, Clarrie Grimmett (17) and Bill O’Reilly (20).

There is, however, a lot to happen before the Ashes gets started.

Cummins will feature at the World Cup before that and for the next few months he will be in white-ball mode but after a summer in which the 25-year-old was clearly Australia’s best bowler, his influence should be noted.

I think his ability to get it done in all conditions – whether it's moving around or not – is second to none.

By the same token, Sri Lanka’s brittle top order won’t be any match for what England will dish up later in the year.

Australian captain Tim Paine was asked after the match if Cummins was staking a claim to be the best fast bowler in the world.

“He's got to be pretty close to it, isn't he?” Paine said. “The difference with Pat is he doesn't take the new ball. So he bowls at times when the ball's not doing as much and the wicket's a bit flatter.

“I think his ability to get it done in all conditions – whether it's moving around or not – is second to none. I felt as the summer went on he got better and better the more he bowled.

The express pace of Starc and Cummins had a profound impact on Sri Lanka’s ability to build big totals and their captain Dinesh Chandimal, who had a shocker of a series himself with 24 runs at an average of six, said it was tough going.

"I’m really disappointed but I work hard in the nets and I work hard on my game. I give my everything.

“We were outplayed as a team in all three departments. Credit goes to Australia, they have played some outstanding cricket throughout the series.”

Cummins’ form has never been an issue but getting Starc and second-innings century maker Usman Khawaja higher on the wicket and runs tally was a perfect result for the home side.

“Whilst those two guys haven't had outstanding summers or as good a summers as they would have liked, the way they went about it at training and the way they led our group in terms of effort and how you prepare to play Test cricket was great," Paine said. "For the younger guys to see them go through a really tough period, not throw in the towel and keep working away and get the results they did in this Test was a really good lesson in perseverance."