SACRAMENTO — Coach Kenny Atkinson tried just about everything to kick the Nets into gear on Tuesday night. There were quick timeouts, angry, animated discussions with his players and even switching from man to zone defense.

When nothing else worked, D’Angelo Russell and a handful of Brooklyn reserves took over and carried the Nets to an improbable win on their longest road trip of the season.

Russell scored 27 of his career-high 44 points in the fourth quarter, Rondae Hollis-Jefferson made a layup with eight-tenths of a second remaining, and the Nets rallied from 28 points down in the second half to beat the Sacramento Kings, 123-121, and snap a four-game losing streak.

“We were at our wits’ end; it was kind of desperation,” Atkinson said. “It was a little bit like, ‘Let’s conserve our main guys and kind of play it out.’ I wasn’t expecting an amazing comeback, I just have to be honest. And then slowly but surely we started cutting the lead.”

Brooklyn was sluggish and out of sync for three quarters before Russell sparked the Nets’ biggest comeback of the season.

After scoring 17 points in the first half and going without a point in the third quarter, Russell shot 10 of 15 in the fourth quarter, repeatedly burning Sacramento’s defense with quick drives to the basket. He scored 16 straight points during one stretch while getting plenty of help from his teammates.

“I give a lot of credit to our bigs,” Russell said. “They set screens and got me open, got me downhill. Once you get downhill, any player that can get downhill and see the floor like that and see the rim wide open, the sky’s the limit.” 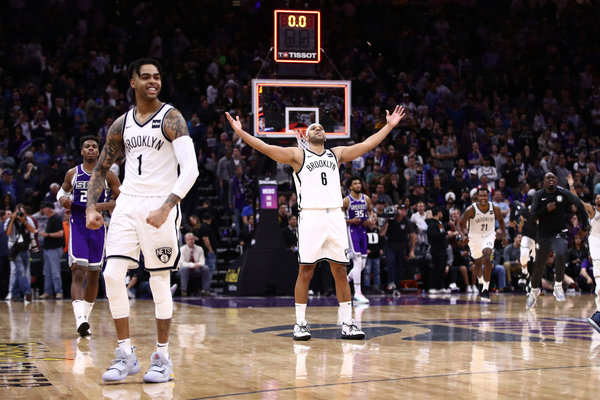 “Once you get in that groove it’s hard to get you out of it,” Russell said. “No matter what defense a team throws at you, you’re going to find a way to get it done. That’s kind of what it was.”

Hollis-Jefferson had 14 points off the bench, and none more important than his game-winning layup after Sacramento’s Marvin Bagley III stepped out of bounds with 5.5 seconds left.

Hollis-Jefferson took the inbound pass from Joe Harris and looked for Russell, who was being double-teamed. With the clock winding down, Hollis-Jefferson drove from near the 3-point arc and went around a Kings defender near the hoop to score.

It was a much-needed boost for Brooklyn, which had lost the first three games of a seven-game trip. The Nets were also struggling to hold on to seventh place in the East before Russell led the comeback.

Two days after beating woeful Chicago, 129-102, Sacramento was well on its way to a lopsided win over a contending team in the East before things slipped away.

“We relaxed and were very casual,” Kings Coach Dave Joerger said. “Didn’t run back on defense, turned the ball over a ton and took a lot of jump shots because we thought it was going to be easy.”